It’s quite a memorable weekend for me as my hubby and I celebrated our 10th anniversary on Friday. We had a wonderful dinner Friday night and went shopping for a new ring on Sunday afternoon as my anniversary present 😀

Since we’ve already seen The Great Gatsby early in the week (check out my review), it’s home cinema time. Looks like a lot of you did go see Baz Luhrmann’s literary adaptation as it managed to make about $50 mil (which is about half of its production budget), but not great enough to top Iron Man 3 which made $72 mil to top box office for its second week.

Anyway, I’m only going to do a mini review of both of these films. So here goes: 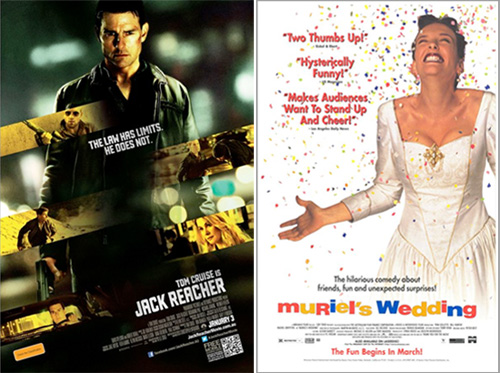 I’ve been wanting to check out Jack Reacher for a while and it’s finally available to rent this weekend. I’m not going to review it here as Ted already written one here. Here’s an excerpt:

In the end I thought it was a well made action thriller that didn’t take itself too seriously and I like the fact it has that old school 70s thriller feel to it. I would definitely love to see more of Jack Reacher films in the future.

I think I’d agree with Ted’s 4/5 rating. I thought it was an engaging thriller that’s more focused on the who-dun-it story instead of just some overly fast-paced but vapid shoot-em-ups. I agree that the action scenes were well-directed and that you could actually SEE the action as director Christopher McQuarrie  didn’t employ the overused fast-cuts with dizzying blurry effect. I think Cruise’s performance here is much stronger than in Oblivion, but then again, there’s more focus on character development here than simply showing pretty visuals.

It’s interesting casting to see two Brits playing American in this movie: David Oyelowo and Rosamund Pike, who are both pretty good here. I’d say Oyelowo even upstaged Richard Jenkins but can’t really fault Jenkins as his role is actually pretty boring. But the scene-stealer is Werner Herzog, simply because he just lends such as sinister portrayal of the main villain who was a former POW at a Soviet Gulag. He’s menacing but more in an amusing kind of way.

We didn’t plan on watching a wedding-themed movie for our anniversary, but we ended up seeing an Australian coming-of-age comedy Muriel’s Wedding. I’ve been wanting to see this for a while as I quite like Toni Collette as an actress. She’s so talented but quite underrated IMO, as you probably could attest if you’ve seen her performance in Emma, The Sixth Sense, Little Miss Sunshine, etc. This is the first of her earlier roles that I saw, which not only displayed her versatility but also her dedication to her craft as she had to gain 40 pounds to play Muriel!

Set in Australia, the protagonist is a misfit girl named Muriel who always wants to escape her miserable life in a fictitious town called Porpoise Spit. The title of the movie refers to Muriel’s obsession with getting married, even to the point of snapping photos of herself in wedding gowns. Collette owns her role as Muriel, featuring a bravura, no–holds–barred type of performance from start to finish. Despite some cheesy and even cringe-worthy moments, overall this movie is an amusing journey about self-acceptance and also a celebration of friendship. Rachel Griffiths is wonderfully spunky as Muriel’s BFF Rhonda, who endured a pretty drastic sudden change that’s heart-wrenching to watch.

One of the major highlights is of course, the wedding scene. If I had seen it before I made my top 10 movie wedding list, I’d have included the one here. I’ve always wondered why the groom has that befuddled look on his face in all the photos from this scene, and now I know why!! If you’re a fan of 70s music, particularly the Swedish band ABBA, then you’ve got to rent this movie. I find myself humming Dancing Queen and Fernando a lot the past couple of days, ahah.

I’d readily recommend both of these movies so give it a go next time you’re looking for something to rent!
…

Well, that’s my weekend roundup folks. What did you see this weekend? Anything good?