Well, this is my attempt at live bloggin’… so this post will be updated from time to time. I’ve actually just turned on my TV but I’ve been on Twitter the last hour during the Red Carpet festivities. Not everyone dresses well, but I’m not gonna dwell on the negatives. Here are five I think looked absolutely stunning… Charlize Theron’s doesn’t really need a great dress to look like a goddess.

As for the Best Dressed Gent and Couple, how about oh-so-dapper Suraj Sharma of Life of Pi and Hollywood’s Golden Couple Ben Affleck and Jennifer Garner? They both look elegant but without the repulsive smugness of Brangelina.

Time listed here is in US Central Time.

7:30 pm – Seth MacFarlane arrives as host. He actually has a nice, deep voice [no I haven’t watched TED nor Family Guy for that matter] so I’ve never heard him in anything before.

Best Bits in the first 10 min:

Nice jab there about Ben Affleck being snubbed by the Oscar…

I know it’s not exactly family friendly but I’ve got to admit I laughed during the ‘I Saw Your Boobs’ skit, I’m sure Kate Winslet is wincing uncontrollably at the end of that song.

Not sure what’s with Capt. Kirk being the co-host in a very musical Oscar. But hey, I’m just glad Channing Tatum was NOT doing one of his Magic Mike routine!

Now… on to the Awards!

Woo hoo!! Christoph Waltz won for Django Unchained! Really, doesn’t seem like anyone has a chance when he’s nominated… twice in a row already. TWO Oscars in the last five years and ten years ago he was in an Austrian soap opera, not bad Mr. Waltz! His acceptance speech was humble and sweet, too, LOVE him!

What’s with Paul Rudd and Melissa McCarthy?? That was so awkward… Not surprised at all that Paperman won. So Disney’s crew got a box seats at the Oscars?? Well it’s televised on ABC after all.

Well there are only five of them… where in the world is THOR?? Not impressed with the five Avengers gang though, they seem awkward and really Jeremy Renner, you suck at comedy!

8:10 pm – WOW, Life of Pi won for both Best Cinematography and Best Visual Effects. I think both are well-deserved as the movie is stunning. But… I was kinda rooting for Roger Deakins to win this for Skyfall. Alas, he remains the Susan Lucci of the Oscars with 10 nominations total now.

8:19 pm – Glad it didn’t go to Hitchcock which I don’t think deserved the nom, Anthony Hopkins makeup was actually distracting. Les Miserables won in this category! And yeah, whoever made Hugh Jackman look ugly deserved it!

8:21 pm – No Bond actors reunion but we’ve got Halle Berry, who’s one of the worst Bond girls, to introduce the Bond Tribute??!

Fortunately after the Bond movies montage…

The 76-year old Dame definitely deserves a standing ovation, wow what a performance! Appropriately she wore gold when she sang her most popular Bond song Goldfinger!

Aside from Adele and Dame Bassey singing, it’s a very meh Bond tribute though… such a bummer for a Bond fan like me.

8:32 pm – Jamie Foxx and the stunning Kerry Washington presenting the award and Curfew won. Never seen any of the films nominated so no comment on this one I’m afraid.

8:35 pm – Inocente won. Again, not familiar with this category, but congrats to Sean and Andrea Fine.

8:42 pm – Though snubbed, Ben Affleck is still a good sport by showing up to present the award for…

Heh, getting sick of that Jaws theme ushering the winners to hurry up with their speech. I wonder how Spielberg feels about his Jaws theme song being used in such an annoying way!

8:50 pm – Amour wins. So basically no Best Picture trophy for Mr. Haneke. Takes the suspense away when the Academy nominate the same film in both categories!!

8:54 pm – Appropriately enough, John Travolta comes out to introduce the musical numbers… but why are we going back in time?? I mean Chicago? Dreamgirls?? [scratching head]

Still, Catherine Zeta Jones looked ah-mazing though in that All That Jazz number. Someone should check if Michael Douglas is hyperventilating in his seat!

Then Jennifer Hudson sang one of the themes from Dreamgirls. Yeah ok, that girl CAN sing! 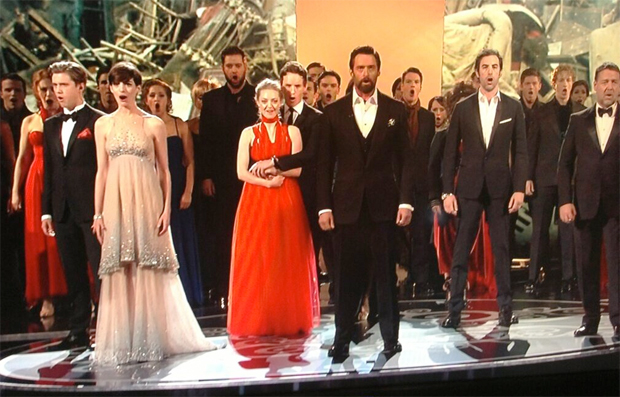 9:10 pm – Mark Wahlberg & that teddy bear from TED present Best Sound Mixing. I know some people are excited for this but I’m not one of them. The winner: Les Miserables.

9:14 pm – Best Sound Editing award [someone ought to tell me the main difference between these two categories]. The Oscar goes to: Zero Dark Thirty… and Skyfall. I didn’t know they could have a tie at the Academy Awards??

9:18 pm – That Sound of Music joke had me in stitches! Mr. Christopher Plummer seems amused, too. Oh how I used to have such a huge crush on Captain Von Trapp

9:22 pm – One of the first non-surprise of the night. The Oscar goes to: Anne Hathaway for Les Miserables. I haven’t even seen the film yet but I think she deserved it… I love how she genuinely thanked her husband in her speech, “Far and away the greatest moment in my life was when you walked into it.” He mouthed back ‘I love you’ when she said it on stage. Awwwwww…

… and the Oscar goes to: ARGO!! First Oscar win for William Goldenberg. With a last name like that, he’s destined for an Oscar, no? In any case, well-deserved award surely and I think ARGO was a great film largely due to his work.

9:34 pm – Time for Adele and that gorgeous Skyfall theme. This song better win, ok Academy!! I was still hoping Daniel Craig would’ve burst out of the backdrop or that all the Bond actors would come out from the disguise of being her backup singers!! Yeah, I’m hopeless 😀 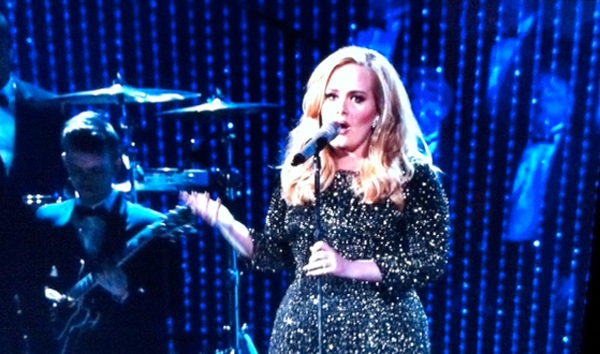 9:45 pm – Nicole Kidman… what are you doing to your face, girl? You are beautiful before all that Botox!! She introduced the next batch of Best Picture nominees.

Now, I’m not too fond of Barbra Streisand‘s singing but her The Way We Were seems appropriate for this segment.

10:08 pm – It’s the year of reunion at the Oscars! The cast of Chicago reunited to present…

I love that Life of Pi theme but I’m rooting for Thomas Newman for Skyfall. And the Oscar goes to: Mychael Dana for Life of Pi! I guess I’m not too upset as that first theme played at the start of the film really moved me…

Now for this one however… I’d be soooo upset if Skyfall did not win!!

10:15 pm – Before I find out though, we’ve got Norah Jones singing the nominated-theme from TED. I think Seth himself could also sing that pretty well.

Ok so it doesn’t exactly made up for the disappointment of the meh Bond tribute, but still, I’m quite happy with the Skyfall win. Adele was so nervous on stage, it’s kind of endearing.

10:22 pm – Charlize Theron and Dustin Hoffman [or as Seth called it… most random Oscar-winning couple] presents the award for…

… goes to Chris Terrio for ARGO! Terrio mentioned how Ben Affleck won Best Screenplay Oscar in 1997 for Good Will Hunting, and now his film brought him his own screenwriting Oscar!

… Quentin Tarantino won his second Oscar for Django Unchained (he won his first screenplay Oscar for Pulp Fiction). I like QT’s speech and giving a moving appreciation to the actors for bringing his script to life.

… goes to Ang Lee for Life of Pi. I’m not extremely wowed by the film but I always like Ang Lee winning because he’s so humble and sweet. This is Mr. Lee’s second directing Oscar after Brokeback Mountain. Sense & Sensiblity is one of my all time favorite film… he could’ve easily won for directing that one as well.

10:40 pm – Jean Dujardin being his oh-so-adorable self presenting the  award for… 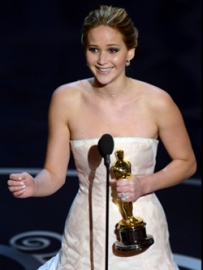 … and the Oscar goes to: Jennifer Lawrence!! I predicted Jessica Chastain to win this thing but I’m not upset at all that Jennifer won. She seemed genuinely surprised and her speech is endearing, she even remembered a family member’s birthday.

I like her. She really is a force to be reckoned with in Silver Linings Playbook… and everything else I’ve seen her in. 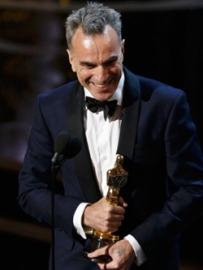 Who else do you think would win in THIS category? Daniel Day Lewis of course. Even Meryl Streep didn’t bother opening the envelope!

Lewis’ speech is surprisingly hilarious. With Meryl’s red lipstick all over his face, he cracked jokes about playing Margaret Thatcher and that Meryl was Spielberg’s first choice for playing Lincoln. Ahah!

10:52 pm – Jack Nicholson being his kooky self. And now we’ve got America’s First Lady to introduce Best Picture?? Conspiracy theories, anyone?? Anyway, Michelle Obama, Nicole Kidman and Naomi Watts must be shopping for their metallic gowns together.

I quite like Ben Affleck’s speech. He doesn’t even seem bitter about being snubbed for Best Director. But hey, so far it’s been quite a blessing in disguise as he’s won practically every other directing award… and now his film won Best Picture. This is a big year for Affleck. Man, what a comeback!!

Well, that’s my first Live Bloggin’ at the Oscars!

There’s not a lot of surprises this year in terms of winners, well apart from the tie in the Best Sound Editing category. I wonder how many times that happens.

…
Well, what did you think of the Oscars this year? What’s your favorite (or biggest gripes) of the night?