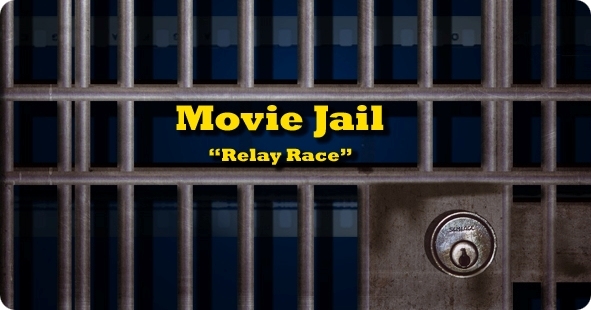 You’ve probably seen this Relay Race been going around in the past few months. I love this brilliant idea, courtesy of my pals Nostra and Terrence which started back in late November. Here’s the gist:

It’s time to put some movie people in jail. The object is to give a prosecutor’s argument as to why these movie people belong in “Movie Jail” whether it be for violating the integrity of the content source of one their films, or being a sell-out, just making bad movies overall, getting worse as time goes on or not being in a good movie for many years.

The baton will be passed to another blogger who will have to do the following:

In order to free someone from Movie Jail they have to do 2 things
1 – Give a defense attorney argument defending the plaintiff
2 – Pay bail: the cost of which is another case for the court and a prosecutor’s argument against the actor/director of their choice that will replace the one set free.

There must always be 10 people in Movie Jail.

Thanks to Diana from Aziza’s Picks for passing this to me last Thursday. At this point, I’m the 12th person on the relay race, here are the previous participants from the starting point:

So let’s take a look at the current 10 inmates, shall we?

Diana rescued George Lucas [glad she did, I would’ve rescued him too] and put K-Stew in. I absolutely concur with her choice and rationale. Stewart was already a prisoner right from the original relay race but got rescued [Sati, though I enjoyed reading your argument, sadly I don’t think K-Stew deserved your eloquent defense], so I’m glad she’s back in! The thing is, I’m totally stumped as to who I should defend. As Diana said before, everyone here seemed to merit their penalty. I wasn’t aware of who Jason Friedberg & Aaron Seltzer and Raja Gosnell before but that’s because fortunately, I have never seen any of their movies — except for Gosnell’s Never Been Kissed — but man, those are awful, awful movies.

After much deliberations, I’ve decided that I’d give my defense not for a complete release but to put said actor on probation. I simply can’t think of anyone here that I’d give a get-out-of-jail free card because their ‘offense’ is quite tremendous.

The actor I choose to defend is:

Yes I know, I’m quite shocked myself that I’d actually pick her as I’ve said it several times on this blog that she can’t act. But she’s generally pretty likable and I feel that she just need to find the right project and be more willing to venture out of her comfort zone [The Good Girl, Horrible Bosses]. For what it’s worth, at least she’s been consistent in her career, I mean, it’s not like she was an Oscar-winning actress who suddenly start making bad choices. Now, that doesn’t excuse her role choices – hence I still put her on probation – but I think she still could make good movies down the road and the right director could perhaps coax a good performance out of her.

The actor I’m putting in jail:

It pains me to put Nic on here as I quite like his earlier roles. I mean, this guy won a darn Oscar for Leaving Las Vegas, and his action movies following that was great: The Rock, Face/Off, Con Air, and his dramatic roles in The Family Man and Adaptation displayed his acting chops. But then his piles of debts pretty much reduced him to a ‘yes man’ who takes every single freakin’ role without bothering to read the script. I mean, other than maybe his supporting role in Kick-Ass, he hasn’t starred in anything decent for as long as I can remember. He’s been so prolific and not in a good way, starring in one bad movie after another, with seemingly no end in sight. I thought the first Ghost Rider was absolutely horrid and he’s made a sequel of the darn thing!! You’d think he’s hit rock bottom when he starred in a Taken rip-off called Stolen [seriously Nic, that is low even for you], but I think that’s still not his worst yet. He’s attached to no less than nine movies just in 2013 alone, according to IMDb, who knows how many of those turn out to actually be remotely watchable?? I could go on but I think most moviegoers could see he’s lost his integrity as an actor. I do hope he could still turn things around though.

P.S. I was actually considering putting Gerry Butler in jail, but I think that Nic is far more guilty than him at this point. But the fact that I’m even considering GB, it goes to show how I feel about his career right now.

Ok, now I’m passing the torch to Iba @ I Luv Cinema.
Curious what she’d do with this list 😀

Well, are you surprised by my picks? Sound off in the comments below.