Happy Friday and the last day of November, everybody! Are you going to the cinema this weekend? Well, unless you’re already set on seeing the new Brad Pitt retro crime thriller Killing Them Softly, perhaps you’re considering what else is worth a watch? Well then these reviews might help you make up your mind.

Thanks to FC contributor Cecilia Rusli and my colleague Sarah McNeal for two of the reviews. 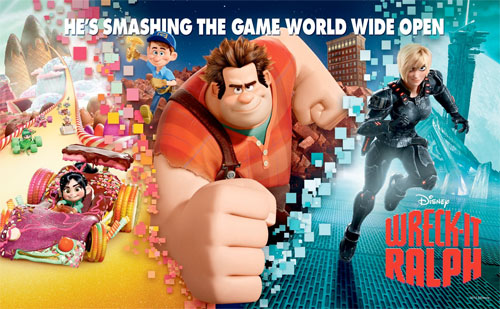 In almost every video game and movies, there’s the good guy, and there’s the bad guy. Wreck It Ralph tells the story of Ralph who has always been the bad guy on a video game and has the duty of wrecking people’s apartments. Every time there’s a villain, there must be the good guy or what’s-so-called  hero. Fix-it Felix is the character which repairs everything Ralph destroyed. Actually the Wreck it Ralph game reminds me of Rampage, a 90s video game where players destroy buildings. I used to play it on PlayStation while i was a kid and it indeed brings pleasure destroying stuff.

While doing his duty on wrecking apartments, Ralph suddenly wants his life to change. He wants to be the good guy who’s being loved by people. Along the way, he met Vanellope, a kid from the world called Sugar Rush. Sugar Rush with its lovable colors looks like the ones I saw at Cloudy with a Chance of Meatballs. A world full of sweet treats.

It turns out that Ralph has to team up with Vanellope in Sugar Rush and help her to win a car race there. A car race is also brings some video games nostalgia. One I remember pretty well is Crash Team Racing on PlayStation where we need to have a car race with Crash Bandicoot and friends. Yes, it’s a very girly video game. I’m pretty sure there are still plenty of car race arcade games nowadays. During the race scenes, the emotions building between Ralph and Vanellope is done pretty well. The connection between them is very heart-warming and yes it officially made this movie another animated feature with a heart. 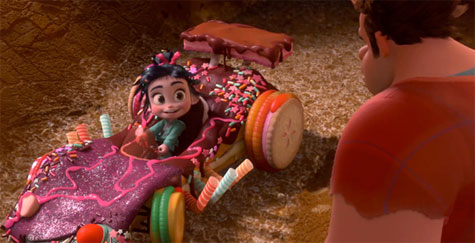 Wreck-it Ralph surely will amuse people who are into video games. Lots of video games characters have a cameo here that fans will surely notice and actually name during the movie. I will not do that here as it’s more fun and exciting to discover them by surprise. In some scenes I was actually concerned that people would walk in front of the screen and I’d miss seeing the cameos!

The 3D was fine. It doesn’t have much pop-up stuff but the scenes at Sugar Rush indeed looks more exciting in 3D. Overall, Wreck-it Ralph is a sweet time machine to the age of 8-bit video games. Great story with engaging characters, lovely colors and musical score surely make Wreck it Ralph one of the best animated movie this year for me. Can’t help waiting for Despicable Me 2 next summer!

Life of Pi is magical and marvelous 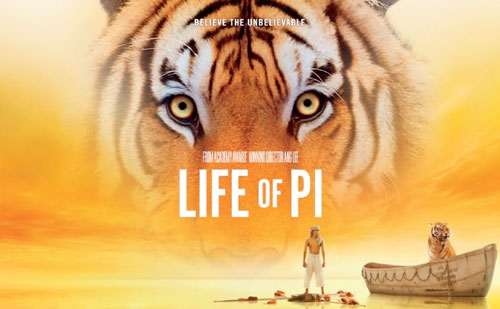 Life of Pi has been near the top of my list of favorite books for years. When I heard it was being made into a movie, I wondered how. When I heard Ang Lee was director, I knew he’d nail it.

The story is of a shipwrecked boy named Pi, sharing a life raft with a tiger named Richard Parker. And so much more. This story to me is all about choosing to believe versus choosing not to – be it in God, in magic, in journeys, in life. Sure, you can believe that life is nothing more than the cells we are made up of, and when we die, we die. Or you can believe that life is a fantastic journey, rich in detail, strife, love, endurance. Which is the better story? This is the simple question the story asks.

At the end of the movie, Pi is recuperating in the hospital when some insurance adjusters come to find out why the boat sunk. Pi tells them his incredible story, which meets with stares and more questions. They want the truth, they say, just the facts. Why did the boat sink? I don’t know why the boat sunk, says Pi, but he gives them what they want and retells the story starkly. It’s not just dull, it’s torpid. In the end, even the insurance adjusters chose to believe. 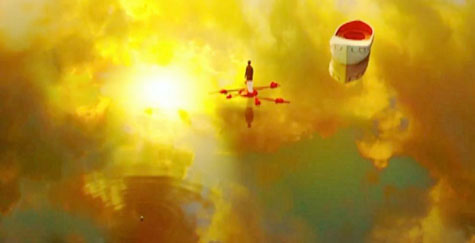 As an animal lover, I have to say: That poor zebra. That awful hyena. And Orange Juice, the orangutan, gets dispatched way too early. But how magnificent Richard Parker is! And those flying fish! And the jellies!

As much as this review is of a marvelous book and movie, I feel I have to put it in context. I went to see it with my husband, who knew only that I loved the book, my 15-year-old daughter, and my 62-year-old sister-in-law, who is a minister. An interesting group of people, one a focus group would almost hand select to see this movie. We all found it amazing. And we are all going back next weekend to see it in 3D! 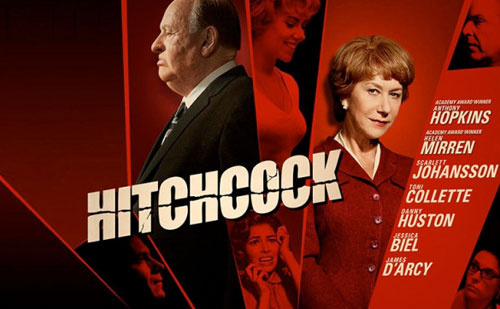 Hitchcock is a love story between one of the most influential filmmakers of the last century, Alfred Hitchcock (Anthony Hopkins), and his wife and partner Alma Reville (Helen Mirren). It’s set during the making of Psycho, and it also explored how Hitchcock came into working on what ended up being his most successful film.

I’m not familiar with the filmmaker and so the strong influence of his wife was quite eye-opening. In fact, Mirren has quite a substantial role here and this film explores the side of Hitchcock, most people perhaps aren’t familiar with. Apparently it was quite a tumultuous journey to bring Psycho to the screen and a lot of personal sacrifices had to be made. I always like getting a glimpse of the making of a classic, how films get made back in the day, the relationship between actors and the studio, etc. That’s the part that I find amusing with My Week with Marilyn.

In any biopic, especially someone as well-known as Hitchcock, the makeup is crucial. At times Hopkins’ look is distracting as he doesn’t seem to look quite right to me, like he’s always high-strung or something. After a while though, I managed to just accept that he’s Hitchcock and concentrate on the story, but perhaps having an unknown in that role might’ve worked better.

The casting of Helen Mirren is the main reason to see it for me. The dame is always so watchable and has always been a highlight in everything she’s done. Not only is she beautiful and still has a killer figure for being 3 years shy of 70, but she has that screen prowess like no other. I love all the scenes Alma is in, especially the part where she passionately gave her husband a piece of her mind during a heated argument.

As for the rest of the supporting cast. Well, initially I wasn’t too fond of Scarlett Johansson as Janet Leigh (I think she’s perhaps more suitable to play Jayne Mansfield?) but she turned out to be ok and the filming of the shower scene where she was screaming her head off was quite the highlight. The scene of Anthony Perkins (James D’Arcy) meeting with Hitchcock is strangely amusing, it’s quite clear in that scene why Perkins was perfect for the role. There’s also a revelatory scene involving Vera Miles (Jessica Biel), albeit a brief one, that hints on Hitchcock’s unhealthy obsession with his leading lady. One of the most curious thing is the character of Ed Gein (Michael Wincott) as the Wisconsin serial killer who’s the inspiration for Psycho’s protagonist Norman Bates. I think their relationship was supposed to be a metaphor — the way Hitchcock seems to be consulting Gein as if he were his therapist, etc. — but it’s not entirely clear to me. Aside from the two leads though, there’s little to no depth in the supporting characters for you to care for them.

I think it’s wise that the film focuses on a specific time frame of Hitchcock’s life, but even so, given the brief 1 hr and 38 minute running time, it still feels a little rushed at times. Tonally this film seems rather off as well, it doesn’t quite work as a drama or comedy and there’s little emotional resonance overall. Perhaps mischievous is the word that comes to mind to describe this film, which I suppose is appropriate given the subject matter.

Just for the record, I actually have not seen Psycho so I was a bit worried that this biopic might be a bit lost on me, but fortunately, the film is more about Alfred and Alma than it is about the film. Perhaps people who are avid Hitchcock fans might appreciate it more though, so I’m curious to hear what they think of this film. 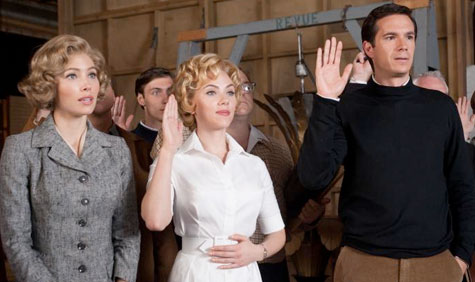 So overall, I’m glad I knew a bit more about this iconic filmmaker and how much his wife played a part in his career. However, the film is a bit too uneven and not substantial enough to be all that memorable. Still, I find it amusing and certainly worth a look for anyone who’s seen at least one Hitchcock film.

Thoughts on any one of these films? Well, let’s hear it!

49 thoughts on “A Trio of New Releases Reviews: Wreck it Ralph, Life of Pi and Hitchcock”