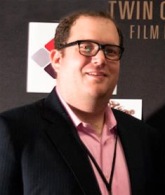 Call it the Ultimate Film Fest Experience. With only 2 more days to go, there are still a bunch of great films playing at the ShowPlace ICON Theatre through Saturday. If you haven’t been able to catch any of the films during the weekdays, but you’re ready for a TCFF movie marathon this weekend, then you’re not too late!

Earlier today I sat down with Steve Snyder, TCFF’s Artistic Director—who’s also TIME.com’s Assistant Managing Editor—to list his recommendations for the last stretch of the film fest. After screening about 200 submissions including a mix of features and shots, and circling other film festivals around the country with executive director Jatin Setia, here are Steve’s picks are that you can still catch at TCFF.

Get your tickets now before they sell out!  Oh and check out this
Amazing Ticket Deal of Saturday Movie Marathon.

I’ve mentioned this on yesterday’s post when I met with director David Spaltro. Well, this film has won Best Feature Film and Best Actress for Minnesota-born actress Molly Ryman in various film festivals. Steve calls Molly a ‘MN star is born’ and this is one of the films that he’s most thrilled about that he was able to get it screened at TCFF. Both David and Molly will be in attendance for a red carpet spotlight and Q&A after.

Having recently chatted with him, I’m even more intrigued by his film and can’t wait to see it. I will post the transcript of the interview when it’s ready, but check out the trailer below:

This is also on my most-anticipated list. I mean the cast alone should get you to rush to see it. Christopher Walken + Philip Seymour Hoffman + Catherine Keener playing members of a string quartet struggling to stay together in the face of death, competing egos and in-suppressible lust. Great thespians making beautiful music together? Steve said you can’t miss this, and I tend to agree. You can view the trailer here.

Winner of Audience Award, Documentary at SXSW 2012: In Bahia, Brazil, generations of impoverished families live in palafitas, shacks built on stilts over the ocean bay. Steve said that not only is the subject matter intriguing, but the incredible access director Annie Eastman was able to get to shoot this film gives it a uniquely intimate portrait of the individual stories of poverty shown in the film.
…

This is a documentary that follows the lives of five immigrant farm worker women over a ten-year period as they labor in the apple orchards and fields of rural western New York, migrate seasonally to Florida, raise their families, and try to hide from the Bush-era immigration raids that were conducted in response to September 11, 2001. This doc is more of an investigative journalism of sort, which illuminates a community that is nearly invisible to most Americans. Director Nancy Ghertner will be in attendance.

These two documentaries are also my picks I’ve listed on this post.
…

Two estranged women tread cautiously into each other’s lives and their newfound friendship creates a mirror of self-discovery in this character-driven indie drama. I actually have had the pleasure of seeing this one earlier this month and I absolutely agree with Steve that this one is definitely worth checking out. It’s rare to see a meaty role written for a woman, let alone two in one film. Both Ryan Driscoll and Elise Ivy are both fantastic here, and the revelation for both characters are quite intriguing to watch. Don’t miss Ryan Driscoll and director Scott Tanner Jones in attendance for Q&A.
…

When their dad dies unexpectedly, estranged siblings Russell, Jane and their adopted brother, Alex, come home to tend to his remains. Don’t be put off by the title, even though it deals with the loss of a loved one, it’s also about a celebration of family and how they come together to achieve a proper goodbye. Steve said he’s very impressed how the actors could pull off such complex characters. He even went so far as calling it some of the best acting performances of this year. Trailer below:

So, what are you waiting for? Get your tickets now »