It’s been quite a hectic start to October for me, but it’s definitely going to be an exciting month with Twin Cities Film Fest just around the corner!

I skipped the cinema this weekend, but it looks like people just can’t get enough of bad ass Liam Neeson with his special set of skills. Taken 2 took in an astounding $50 million (apparently it’s not the third best October opening ever), which is sensational considering the dismal review. Now, even though I heard reports that Neeson won’t be back for Taken 3, the studio is likely to give him an offer he can’t refuse. I do hope he’s got the integrity to say no to that.

I saw a total of three films this week: ARGO (thanks to my buddy Ted for the advance screening tickets), and two great films from the early 90s: The Hunt for Red October and Point Break. Red October is the one Jack Ryan movie that has eluded me for some reason but it’s a fantastic political thriller, and despite being set mostly on a submarine, it’s not at all dull. From the comments on the Five for the Fifth post, seems like a lot of people like Alec Baldwin as Jack Ryan and now I could see why. 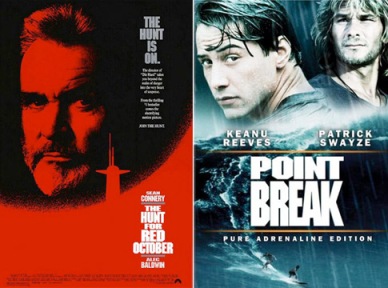 I saw Point Break years ago and I’ve been wanting to rewatch it for some time. I finally bought the Blu-ray this weekend and I certainly have a new appreciation for the Kathryn Bigelow’s action thriller. The story is not ground-breaking but it’s more multi-layered than meets the eye. Full of high-octane action and the surfing and sky-diving scenes are quite spectacular, bummer that Hollywood is reportedly set to remake this cult classic! Anyway, I’m sort of crushing on Keanu Reeves all over again now, ahah.

Now on to the review of…

At first glance you might think this has something to do with Jason and the Argonauts, but no, this one has nothing to do with Greek Mythology though there is a reference to that in the film. This Ben Affleck-directed political drama is loosely based on a true story, that is former CIA technical operations officer Tony Mendez’ account of the Iran hostage crisis of the late 70s.

The opening of the film starts out like a documentary, providing a pretty detailed background of why supporters of the Iranian Revolution are protesting outside of the U.S. embassy in Tehran. Basically, the anti-Shah Iranians under Ayatollah Khomeini demanded for his return to Iran (he was undergoing cancer treatment in the US) for trial and execution.

For a film where the outcome is already known, Affleck did a great job in building up the suspense right from the get go. The whole sequence where the Iranians took over the embassy is quite gripping, and how the six of the consular employees were able to escape just in the nick of time and ended up taking refuge at the Canadian embassy.

Enter CIA officer Tony Mendez (Affleck) who’s tasked to get those six men out of the country. According to Wiki, Mendez’s work in the agency frequently dealt with forging foreign documents, creating disguises and handling other graphical work related to espionage. After exploring all the options that the agency considered — one of which includes a bike trek across 3000 miles of treacherous mountain conditions! — it’s clear that the utterly bizarre idea of smuggling them as a fake film crew was the only option!

ARGO is full of edge-of-your-seat scenes from start to finish. It doesn’t take long for the audience to realize just how high the stake is and how those escapees’ lives are in great danger, as they could be discovered at any moment. If found, they would suffer a much worse fate than the hostages, and Mendez saw that firsthand when he arrived in Iran and saw men being hung from cranes in public view!

Thankfully, Affleck peppered the taut suspense with dry humor and lighthearted moments, courtesy of the delightfully zany pairing of John Goodman and Alan Arkin as Oscar-winning make-up artist John Chambers and Hollywood producer Lester Siegel, respectively. The scenes in Hollywood as they’re working on coming up with the fake movie is such a much-needed relief from the tense situation happening in Iran. It’s a hoot to see both Chambers and Siegel working on a movie that doesn’t even exist, there’s even a fake reading and launch party to get the press to ‘sell’ the movie! In the CIA camp, there’s also Bryan Cranston as Mendez’s CIA boss in D.C. who’s always fun to watch.

This is Affleck’s third outing as director and now I can say he’s one of my favorite directors. I’d rate this as high as Gone, Baby, Gone and once again the 40-year-old Bostonian displayed his keen ability to not only cast excellent actors but drew the best performance from them in his films. Though his own acting here is good, I still think Affleck is much more skillful behind the camera. The lesser-known actors playing the hostages also did a good job in their roles, as well as Victor Garber as the Canadian ambassador.

Final Thoughts: In a year chock full of movie superheroes, it’s nice to see a real-life story about a group of quiet heroes who took great risk to save others. Kudos for Affleck for creating an authentic and atmospheric film. ARGO is a thrilling and entertaining adventure that shifts brilliantly between three different locations—Washington D.C., Tehran and Hollywood—until it culminates in a nail-biting finale. Stay on during the credits as they show the photos of the real-life individuals depicted in the film, the casting manager did a good job in finding actors that resemble them. This is easily one of the best films of the year and surely will end up as my top 5 of 2012. At this point, it could even be a shoo-in for Best Picture Oscar nomination.
…

What did you see this weekend? Anybody else seen ARGO? If so, do let me know what you think.