Happy Monday, everyone! Hope y’all had a nice weekend. I skipped the cinema again this weekend as it’s quite a hectic one with my hubby Ivan’s triathlon on Saturday morning and we also had people over for dinner this weekend. 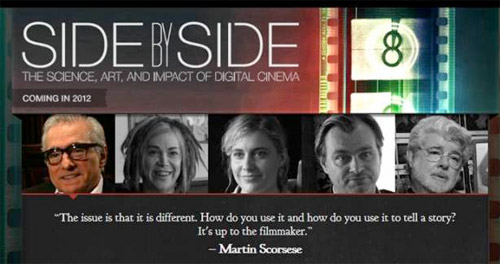 But Friday night we had a chance to check out the documentary we’ve been wanting to see for a while. I posted the trailer a while back, check it out if you haven’t already.

This is an insightful and thoughtful documentary produced and narrated by none other than Keanu Reeves. I’ve always thought that Keanu is one of those actors who are far more intelligent than meets the eye, and despite his stoic style, I quite like him as an actor and enjoyed a lot of his movies. Here he collaborated with Christopher Kenneally who previously worked with him as production manager in Henry’s Crime to direct the film. I think Keanu is the perfect person to conduct all the interviews, not only has he worked with a variety of directors in over 50 films, he’s also got that friendly, laid-back personality that would help make all the directors feel at ease discussing this hot-button issue. It’s nice to see Christopher and Keanu’s passionate curiosity on this topic as they asked some honest questions on both sides of the spectrum.

Oh I’m sure Nolan would be happy to continue making more 70 mm films, but man those are expensive!!

Does digital kill film?? That’s the key question that’s running through the vein of this film as it investigates the history, process and workflow of both digital and photochemical film creation. It was certainly insightful for people like me who don’t really know much about the technical aspect of film and just what it took to get a film from the set all the way to the reels being delivered to our local cinemas. It does get quite technical at times which went over my head a little, but it’s always fascinating and they did a good job presenting it in layman’s terms with simple charts and graphs. There are also some footage from participating directors shown as examples.

Keanu had a pretty impressive list of filmmakers discussing digital vs. film, George Lucas, James Cameron, David Lynch, David Fincher, Steven Soderbergh, Danny Boyle, the Wachowskis, Martin Scorsese, Christopher Nolan, etc. as well as famed cinematographer such as Wally Pfister, Vittorio Storaro, and Anthony Dod Mantle who won an Oscar for his cinematography work in Slumdog Millionaire. There’s also a fascinating interview with Anne V. Coates who edited the 70 mm film of Lawrence of Arabia! I read in Movieline.com that apparently Nolan was the toughest to get for this film, but he got a kick out of Keanu’s snail mail letter using an old-fashioned typewriter. So Nolan agreed to be interviewed during filming The Dark Knight Rises in L.A.

As a cinephile, of course the best part is listening to the arguments each of the filmmakers makes on each of the two form. It’s no surprise that Nolan and Pfister would be the biggest defense of celluloid and that Lucas and Cameron are the champions for digital. But most of them realize the art and beauty of traditional film, but yet can’t deny the power of digital, not to mention the financial benefit and convenience of being able to film scenes that were impossible to do before. For instance, Danny Boyle shared the filming of the exquisite Westminster Bridge scene [undoubtedly one of my favorite scenes in London], and how it’d have been impossible to film those without the use of digital cameras. Scorsese seemed gleeful at the infinite possibilities storytelling could go with digital technique, having just been immersed in 3D technology with HUGO. Seems to me that according to this documentary, there are more filmmakers who are more pro-digital, even David Lynch likes the fact that digital cameras allows him to film for more than 10 minutes at a time.

The film seems pretty comprehensive in discussing the merit of the two forms, it even went briefly into related aspects such as coloring and archival process. Yet it seems to gloss over what it’d all mean to the local movie theaters and the effect of the digital process affect them as more movie studios are pushing to abandon 35 mm film. My dad used to work as a projectionist before he got into film, but that’s surely going to be obsolete now, as most films are going to be projected digitally in no time.

Wherever you are in the film vs. digital debate, this documentary is a must-see for you. No matter how articulate one’s argument about 3D though, I’m still not fond of it until they can figure out how people could see 3D films without those pesky glasses. And for me, whichever form they go with, the most important thing about a movie is still and will always be, the story. I sure hope no matter how advanced film technology goes, filmmakers won’t ever forget the art of storytelling.

Have you seen this film? Thoughts on the digital vs. film topic?

43 thoughts on “Weekend Roundup: Side by Side Documentary Review”