In an era where seemingly every Summer we get a superhero cinematic event, Christopher Nolan still manages to kick it up a notch with The Dark Knight Rises. Really, even without the ruckus over death treats over negative reviews and the tragic event that happened in Aurora, CO, during a midnight screening, the hype over the final chapter to Nolan’s Batman saga is still a colossal one. The over-exposure is really quite overwhelming, to the point where I have to make extra effort to tune it out and be as fresh as possible.

Well, I’m happy to say that it paid off to know as little as possible about the plot as I was surprised a couple of times watching this. I think those of you that still have not seen this yet, I suggest you do the same and avoid reading about it as much as you possibly can.

Now, the gist of the story is actually pretty simple… it’s eight years after Bruce Wayne has hung up the Batman mantle, still haven’t moved on from his lost love Rachel who perished in The Dark Knight. But suddenly a disturbance of great proportion threatens to destroy his beloved city of Gotham, and so he feels compelled to help its citizens, even at the risk of facing an adversary that’s even greater than he had faced before. So the gist is simple, but somehow, Nolan and his team of writers concocted a complicated storyline involving a myriad of characters that at times I was left discombobulated trying to make sense of it all.

Before I go further with my critique, let’s start with the positive first.

Nolan has certainly done a remarkable job in maintaining the tone and quality of all three films that they work seamlessly as one spectacular trilogy. In keeping most of the cast intact and most importantly, the writers, we are already fully invested in the story and characters, and when new characters are introduced, there is no dissonant. 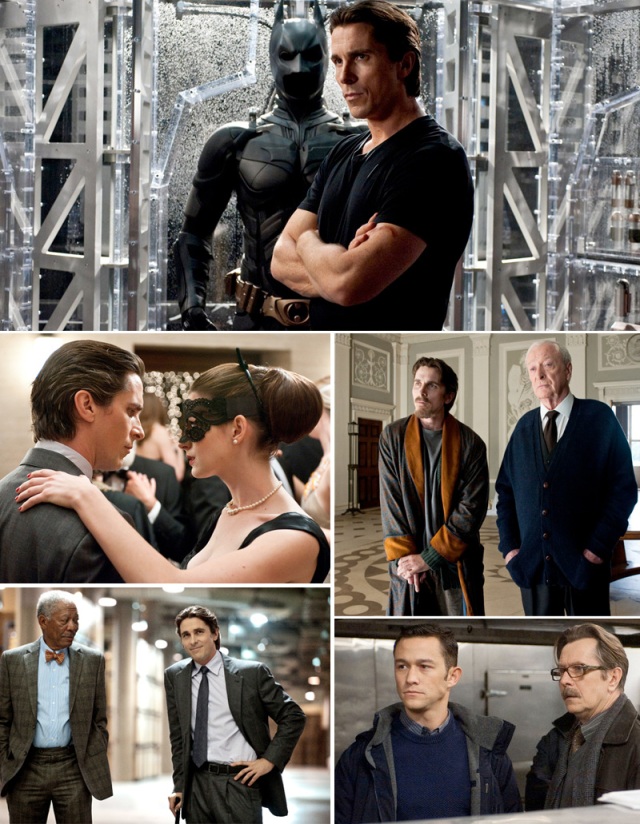 Two of the new main characters are both impressive — Anne Hathaway as the masterful thief Selina Kyle [she was never described as Catwoman though she essentially is one] and Joseph Gordon-Levitt as rookie policeman John Blake. Both actors bring something new to the table and I’m happy to say that my doubt about Hathaway’s casting was quickly erased the moment she appeared on screen. She was sassy, strong and playful but yet has that vulnerable side to her for the emotional moments in the film. Marion Cotillard as a philanthropist businesswoman Miranda Tate doesn’t have much screen time by comparison, but her character is certainly a crucial one.

As for Bane, now I think he’s a pretty formidable villain though not the character itself and Tom Hardy‘s performance is not as iconic as the one from the previous installment. Yet I think he’s quite a force to be reckoned with and there are some scenes that made me shudder just on the sheer of physical strength he had.

The rest of the returning cast (Gary Oldman, Morgan Freeman) are in top form as well, but if I were to rank my favorite Nolan’s Batman saga characters, I’d say Alfred Pennyworth will be in my top five. Michael Caine brings so much heart into the story, and there’s one pivotal conversation between him and Bruce Wayne that makes me cry. He’s such a father figure to Bruce, and as I’ve said in this Father’s Day post, Alfred really is the one who helps shape Batman to be the kind of hero we’ve come to know and love. Christian Bale proves once again he is the perfect choice to play the conflicted, tormented hero and he even looks like he’s aged a bit here, eaten up by such deep sense of grief.

As Ted mentioned in his review on Saturday, I also think the action scenes are brilliantly-executed. There are not as many of them but once they appear, it is so thrilling and fun to watch, especially the moment Batman first appeared with his brand new toy, the flying tumbler fittingly dubbed The Bat. I feel like I was one of Gotham’s citizens happily cheering my hero once again! As for the mano-a-mano with Bane, well this moody poster with the broken Batman’s cowl on the ground certainly delivers its promise. That fight scene is brutal! Nolan is not afraid to make the hero suffers and Batman has never been more in peril than he is here, both physically and emotionally. Yet we will see why the title ‘Rises’ is aptly used here.

Visually it’s a wonder. Seriously, it’s worth every penny seeing it on the giant IMAX screen. Over an hour of this movie was filmed on 70 mm IMAX film and boy did it show! I was ooh-aahing throughout seeing those gorgeous aerial shots of Gotham, I am certainly glad he chose this format instead of 3D. His longtime collaborator, Wally Pfister ought to get an Oscar nod for his cinematography work here.

At 2 hours 44 seconds, the film also able to keep me engrossed the entire time, which is quite a feat.

So, what doesn’t work here?

A couple of them is on the technical level, such as Bane’s often unintelligible voice that makes it even impossible to comprehend when Hans Zimmer’s score is blaring so loudly in the background that it drowns out everything else happening in that scene. There are moments where I wish they’d turn the volume of the music down a bit so I could hear the sound of the environment the scene is set in and more importantly the dialog! Even when the characters are screaming, I still have trouble hearing what they are saying. I think the score is good, but because it’s so irritatingly loud, I can’t appreciate it as much as I would otherwise. 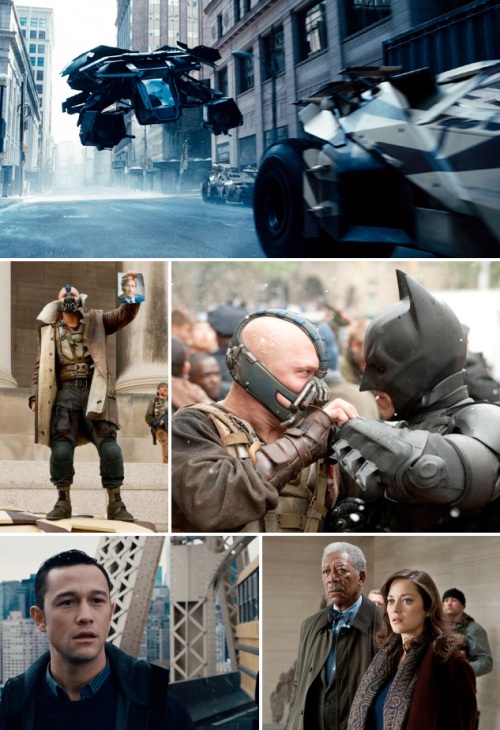 Now, plot-wise, seems like in seven years, the complexity level has quadrupled since Batman Begins and as I’m watching it, I feel like Bane is not the only one having trouble breathing as Nolan doesn’t seem to give much room for us to come up for air. This film is sooo jam-packed with layer after layer of plot, and whilst it has the power to thrill, it also can be quite frustrating at times. Now, I don’t mind the complexity of the story, but I feel that Nolan seems to be more concerned with the bigger picture of the plot that the *smaller details* seem to have gone by the wayside.

Interestingly, I just read this well-written article on Anomalous Material by Nick Prigge that talks about how the Nolan brothers certainly know their set-ups and payoffs. That is, with every small set-up in the movie, even a seemingly trivial one, there’s always a pay-off, which is always a good rule of thumb in screenwriting. Yet I feel that the writing team drops the ball a few times in this final installment. I’m only going to mention those examples in the spoiler section below for those of you who have seen the movie, but let’s just say that the suspension of disbelief is often stretched too far, and I’m saying that because Nolan has pride himself in creating such a realistic universe in his Batman films that I expect more from him. It’s not a deal-breaker in the grand scheme of things, but yet it’s big enough that I’d have to take into account when I rate the film.

Is this THE best Batman film of the three? I’d say no, and not only because Heath Ledger’s The Joker was such a more compelling villain, but more because of the lack of inconsistencies in the way Nolan set up the universe of Batman and Gotham. I guess I scrutinize this film more because I have come to expect so much more from Nolan and the director himself has set the bar so high to justify such expectations.

Still, overall The Dark Knight Rises is a satisfying finale to a fantastic [and lucrative] franchise, and it boasts such a WHOA ending to boot! The conclusion mirrors that of the spinning totem in Inception where we’d be endlessly discussing what we *think* happens at the end [that darn Nolan does it again!!]. I’m also glad that there’s surprisingly a lot of heart beneath such an exhilarating, rip-roaring superhero blockbuster.

Soooo, what did you think of the movie? Do you agree with my assessment? Feel free to discuss about the spoilery stuff but please state a warning in your comment as a courtesy 🙂