Greeting, all and sundry! After giving my cerebrum a well deserved respite which coincided with the release of The Avengers, I’ve decided to dive back in. Taking a hint from Ruth and applying it to the realm of lists while keeping within the arena of classic films and those involved.

To this end, allow me to introduce one of the most talented, yet under rated actors of the past century. Whom many may recognize as a poster boy for Disney during the 1960s and later as television’s proverbial Perfect Dad in My Three Sons. A worthy topic for another time. Though now, I would like to plunge back to the earlier times and films which firmly planted the subject of this dissertation on the Hollywood map while specializing in a specific and memorable type of character. 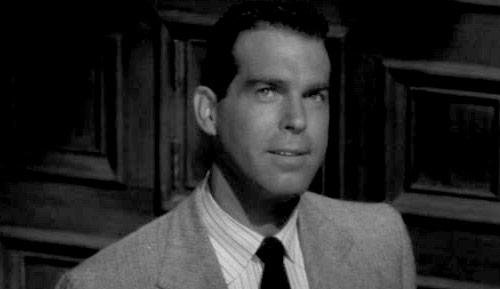 Louses come in all shapes and sizes in film. From Richard Widmark’s Tommy Udo in Kiss of Death or Skip McCoy in Pickup on South Street. Talented, yet invisible people who seem to suffer from a delusional ego. To Peter Lorre, who made a cottage industry out of portraying such countless films. Today, Steve Buscemi would fill that niche comfortably with room to spare!

What makes a ‘Superb Louse’ is the ability to portray someone of lesser or low moral character while also making the character likable and memorable. Within these strict confines, for a brief period in time, Mr. MacMurray ruled the roost. Beginning his sojourn in one of the great classic Film Noirs directed by Billy Wilder: 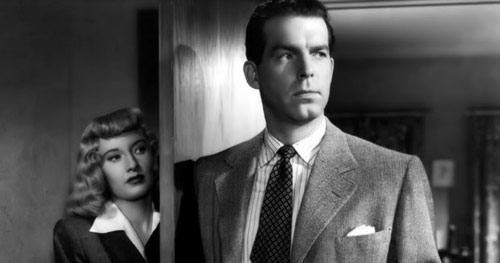 Playing workaday insurance salesman, Walter Neff. Who drops by the home of Phyllis Dietrichson. Silkily and alluringly played by Barbara Stanwyck, to get some final signatures on Mr. Dietrichson’s car policy. Sparks sizzle at first sight. Which evolves into flirtation while negotiating a life insurance policy and its much larger payout for accidental death.

The avalanche begins and it’s too late for the pebbles to vote as Phyllis starts upping the ante. While Walter begins to bend the truth to his partner, Barton Keyes. Brought to low keyed, underplayed life by Edward G. Robinson. Who knows when something just doesn’t look or feel right. MacMurray’s strength is brought to the fore in his straight faced ability to lie and keep two plausible sets of facts straight. While fully aware that he is sinking deeper in deep in Phyllis’s ensnaring web. In a shadowy B&W that begins at the tale’s end and is told in flash backs as a slowly bleeding out Walter tells all into a recording Dictaphone Machine.

A decade had passed and Mr. MacMurray had the opportunity to pick up those few shiny pebbles to a high gloss for a pivotal supporting role that everyone thinks is a Humphrey Bogart film, but really isn’t. Though he owns the ball bearing assisted plum scene during the Court Martial before the final reel. No, the magic of The Caine Mutiny is that the film is solid ensemble. While the mutineers’ defense council, Lt. Barney Greenwald, magnificently played by Jose Ferrer captures every scene he is in.

That capturing would never have taken place without the connivance of MacMurray’s Lt. Tom Keefer. College man, self proclaimed intellectual and failed playwright. With an over sized ego, subtle condescension to match. Who lazily tolerates the Captain of the Mine Sweeper, Caine while taking fresh faced, young, naive Ensign Willie Keith under his wing. Once the Captain is reassigned to another ship, Keefer’s tolerance melds with wary caution in regard to the ship’s new Captain, Lt. Commander Philip Francis Queeg. A WWI hold over and very Navy. Who moves at his own speed with his own rules. Unwittingly supplying Keefer with a shopping list of complaints as he draws Van Johnson’s career minded Lt. Steve Maryk into the cabal.

Creating a series of accidents and mishaps that culminate in perhaps, losing the Caine to a tropical Typhoon. Setting the stage for a Court Martial where Keefer’s ego writes checks that can’t be covered. Walking the tight rope of settling perceived scores while tossing Queeg to the wolves and saving his own skin. Queeg is quietly ushered out. The mutineers are acquitted. And later at a celebratory party, Mr. MacMurray’s Keefer is solidly deserving of Lt. Barney Greenwald’s scathing dressing down and challenge to a fight.

Ramping it up the sleaze and slime factor about four fold as Robbery Detective Paul Sheridan. Who starts out as honest and straight laced. A bit of of ladies’ man. Tipped to an opening scene bank robbery where people are killed and the robber, Harry Wheeler, fleetingly played by Paul Richards, escapes. Sheridan deftly disables the possible getaway car owned by robber’s moll, Lona McLane; sultrily played by Kim Novak in her debut role. Smoothly picks up Lona. Invites her for a drink and soon finds himself getting in over his head as Lona just as smoothly seduces Sheridan and suggests an easy way out with her and the bank’s stolen $200,000.

The film’s back lot, claustrophobic, shadowy, rain slicked look and Noir feel fit Mr. MacMurray’s Sheridan like a glove as he stakes out Lona’s tiny apartment in its U-shaped complex. With a plethora of high dolly shots that make Sheridan’s trench coated shadows stretch even longer. Selling his soul to the devil as he lies to his partner, Rick McAllister, well played by Philip Carey and paternal overseer, Paddy Dolan. Fudges reports to his by the book boss, Lt. Eckstrom, a sturdy, aspiring E.G. Marshall. Then slither away to see Lona and their plans quickly head south. Culminating with a few unexpected, noisy, greed motivated murders that leave no one the better.

We now find Mr. MacMurray again under the deft hand of Billy Wilder. As a rather major cog in a flawless Magnum Opus to very early 1960s Corporate America. Its hive of worker drones. The key to success and all its bells, whistles, vices and secret that are part and parcel of innovation, imagination and climbing to the top. Here, MacMurray reigns supreme as he toys with and sometimes taunts a new and possibly unwelcome addition to his fiefdom. Jack Lemmon, deftly mixing comedy and drama as naive, sometimes nebbish-y, C.C. Baxter.

MacMurray’s personnel director, Jeff Sheldrake is at the pinnacle of his appointed ladder. Basically content and more than somewhat amoral. He quickly adds his own name to the list of executives young Baxter loans his close by apartment to for late night, off the books assignations. Sheldrake dangles shiny totems and talismans of advancement before Baxter eyes. Private office and perks. While carrying on an affair with elevator girl, Fran Kubelik. Realistically brought to life by Shirley MacLaine.

Troubles ensue when Miss Kubelik catches Baxter’s fancy. Keeping relatively low key until Christmas Eve Night. While Miss Kubelik waits for Shelldrake at the company party. Only to see him enter with an earlier secretary, Edie Adams. on his arm. Miss Kubelik panics and runs to Baxter’s empty apartment and attempts a suicide with sleeping pills. Sheldrake remains, perhaps gleefully and deliberately oblivious of it all. Juggling multiple mistresses with a knowing, winning smile until the final few minutes. When Baxter quits and gives Shelldrake his surprising and well earned comeuppance. With a verbal berating and the returned keys to the executive washroom.

While being given many roles to play, I still believe that Mr. MacMurray was anxious to find a niche where he could stretch and flex his muscles and have some fum with particularly meaty roles under the guidance of tried and tested directors. More so with Billy Wilder, who gave the actor ample opportunities to deliver some of his best, most memorable work. Not as the hero, but the heel. Cunningly pulling strings in The Apartment and to a lesser extent in The Caine Mutiny. While also being able to flip the coin and portray an every man who takes a decision and winds up on an E Ticket to Hell in Double Indemnity and Pushover. Films revealing clever men you may not mind sharing a drink with. Though not much more.

What do you think of Fred MacMurray? Do share your favorite role(s) of this classic actor.