How big of a smash hit is The Avengers? Certainly a hulking big one with over $200 mil domestic opening weekend. That number already broke the record of the final Harry Potter film ($169 mil) released last year, and combined with the international earnings, it brought the total worldwide haul to $641.8 million in barely a week and a half, more than its Marvel superhero forerunners Iron Man, Iron Man 2, Thor, and “Captain America took in during their entire runs! [per Yahoo! news]

Whoa! The Disney folks must be having a big party right now as this movie will likely make up at least a quarter of their $4 billion investment to buy Marvel Entertainment back in 2009. Ka-ching, ka-ching!

We finally got to see it last Friday after seemingly everybody on the blogosphere have seen it. We saw it on IMAX 3D and I must say it’s worth every penny!

Instead of a straight-on review, I’m going to list some of the reasons I think The Avengers rocks:

1. Josh Whedon’s marvelous direction. Let’s face it, it takes a capable hand to combine sooo many comic characters and not only make it work but thrive in their collaborations with each other. It’s quite a massive undertaking and even with Whedon’s experience handling a large ensemble cast, it’s still going to be tricky. But after seeing the movie, it’s clear that Marvel did choose the right man for the job!

2. How funny this movie is! Ok, from the trailer, I was expecting witty banters and occasional humorous moments, but it’s a pleasant surprise that this film is downright hilarious! Whedon’s screenplay made the most of each of the characters’ antics perfectly and the one liners are even funnier than what you may have seen in the trailers. The theater literally burst out into riotous laughter a number of times, I tell you, this movie is funnier than a lot of movies actually claim to be a comedy. 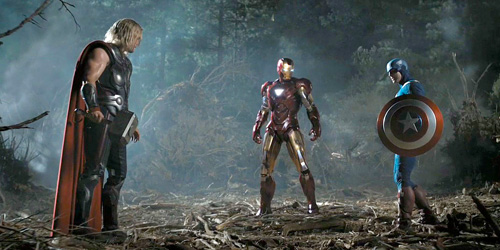 The scuffle between Iron Man, Thor and Captain America is riotously fun, I was in stitches when Iron Man teased Thor about his cape:

“Shakespeare in the Park? Doth mother know you weareth her drapes?”

Ha! That’s probably my favorite line from the movie! Another major highlights is when the Hulk meets Loki and throws him around like a rag doll. When it comes to a superhero movie of this proportion, laughter is definitely a potent weapon and it hits the target squarely in the face!

3. The spectacular cast. I already like the individual casting of Iron Man, Captain America, Thor and Loki but the additional cast make for a great mix. Robert Downey Jr. is at his top notch wisecracking self, all his scenes with various Avengers team mates are a hoot, especially when he first met Dr. Bruce Banner. Glad to see Clark Gregg a.k.a. Agent Coulson getting some great scenes, including a particularly poignant and memorable one. Though I initially wasn’t too crazy about Scarlet Johansson and Jeremy Renner as Black Widow and Hawkeye respectively, I think both did a fine job. Scarlet holds her own against all the boys and she brought much more depth to her character than what I’ve seen in Iron Man 2.

4. Hulk Smash! I have to create a separate bullet point for the big green giant here. My hubby said that if he had to pick only ONE favorite character from the movie it’d be The Hulk. It’s not necessarily Mark Ruffalo’s performance, I mean he’s good as Bruce Banner, but it’s the CGI-ed character that has the most memorable sequences and whenever he appears on-screen, he practically brings the house down!

5. The impressive set pieces. Just because a movie’s got over $200 mil budget doesn’t always mean it looks good, but The Avengers actually look like it cost a lot to make. For one, the helicarrier which is basically S.H.I.E.L.D’s flying headquarter than can fly AND float on water is just so cool and so are the details regarding each of the character’s attire and um, accessories 😀

Oh and that Stark Tower is ever so sleek! The part when Iron Man landed on it and the whole coming-out-of-the-suit thing is just pure geek-gasm stuff! And here I thought that briefcase suit in Iron Man 2 doesn’t get any cooler, Whedon invents yet another sensational way of Tony putting the suit on the way down from his tower!

6. The solid script. Thought it’s not exactly a deep movie, and those expecting one obviously misses the point, there’s actually enough substance in the story. There is a sensible continuation from the previous films, especially regarding Thor’s brother Loki’s motivation to wreck havoc on earth. The history between some of the characters is explored to a degree, and what this initiative means to each one of them.

7. A worthy villain. Thanks to Kenneth Branagh for casting the RADA graduate Tom Hiddleston who brings so much menace to his role as Loki. He’s a fun villain to watch as he’s quite a tragic character who’s more of a ‘lost creature’ than a deranged maniac, and Hiddleston’s dramatic training is put to good use here. There’s a great scene where he’s channeling Superman‘s Zod in a sort of ‘Kneel before Zod’ moment, and he admitted in an interview that the Christopher Reeve’s Superman films are part of his childhood.

8. The pure adrenaline rush. From the get go when Loki had his grand entrance to earth, the action never lets up. It’s visually thrilling and appropriately bombastic. The sense of humor never left even the final battle scene between the Avengers and Loki’s army, which makes the already electrifying sequences even more entertaining.

9. The dynamic score from Alan Silvestri. Part of what makes a great action movie is undoubtedly the music and this one captures the bravery and heroism theme of the story. It reminds me a bit of the awesome soundtrack of X-Men: First Class somehow, especially in the scene when Magneto lifts the submarine.

…
10. The celebration of humanity. For a movie about superhero that aren’t all earth-bound creatures, this movie speaks about the courage to stand up against evil and not take a bully lying down. It also has a great message about being a part of something greater than yourself and working together as a team to achieve it. The ‘Avengers Assemble’ phrase has a special significance as despite their initial clashes, they do set aside their differences and end up working well together as a team.

Final Thoughts: It’s always nice when a movie lives up to the hype. It’s hard to suppress your expectation when the reviews are this good (90+% on Rotten Tomatoes with over 200 reviews) but The Avengers definitely merits all that. Now, it’s not flawless however, there are some stuff that are not explained very well, especially regarding the Hulk and how he went from being an uncontrollable monster to someone who could take orders from Captain America in a particularly comical scene, but I’m just so engrossed in all that’s happening that I’m willing to let that go.

In the end, this movie gives you everything you expect in a superhero film and not the ‘guilty pleasure’ variety. As Hiddleston eloquently said in this Guardian article, “…superhero films have much to teach us about faith and humanity – as well as being terrific visual spectacle.” He may be playing the villain, but I think Tom has a firm grasp of what a superhero movie should be about.

Oh and if you haven’t seen this yet, whatever you do, DON’T LEAVE before the final credit scene. Trust me, it’s worth staying for!

So what did you think, did The Avengers live up to your expectations?  What’s YOUR favorite moment from the movie?

79 thoughts on “10 Reasons why I think The Avengers rocks”