The third annual TCFF event is just around the corner and I look forward to covering the festival again as I’ve done in the past two years. This year we kicked things off early with encore screenings of: 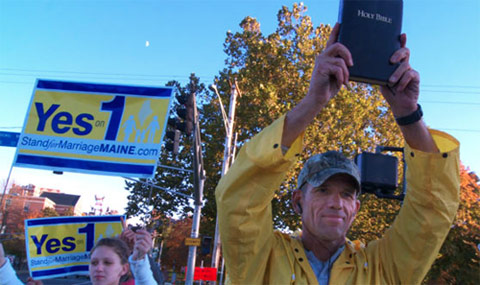 Closely following Proposition 8 in California, a referendum battle on same-sex marriage tore apart the state of Maine. Filmed from within both campaigns, “Question One” chronicles the fierce and emotional battle that took place and reveals the tactics and strategies that led Maine to become the 31st state in this country to say no to same-sex marriage.

Minneapolis local paper The Star Tribune ran this commentary article written by director Joe Fox on what he learned filming the campaign over same-sex marriage in Maine. Fox said that, ‘As a storyteller and journalist, it was important for me to create a film that did not take sides. I wanted to make a film that held up a mirror and reflected the complexity of an issue, but I also wanted to honestly capture the human stories of all.’

To learn more about the film and the filmmakers, be sure to visit the Fly on the Wall Productions website. I’m still hoping to secure an interview with Joe Fox, hopefully that’ll happen yet this week. I’ll post it as soon as it becomes available.

Tickets for the screening of Question One tonight will be available at the Theatres at Mall of America at 6pm. $10 cash or credit.