Greetings, once again! It isn’t often that I’ve been given the opportunity to indulge in a Trifecta or triple play regarding one of Hollywood’s premier Tough Guys, Robert Mitchum. I covered his Scary attributes in The Night of the Hunter. I am going to dial it back a bit and explore another arena where the actor reigned supreme. Intimidation. Best illustrated in a film from 1947. Directed with sly gusto, elan and eerie shadows by Jacques Tourneur. Who instinctively knew when bright sunlight and its absence were called for. Where to put them and for how long. To that end, allow me to introduce: 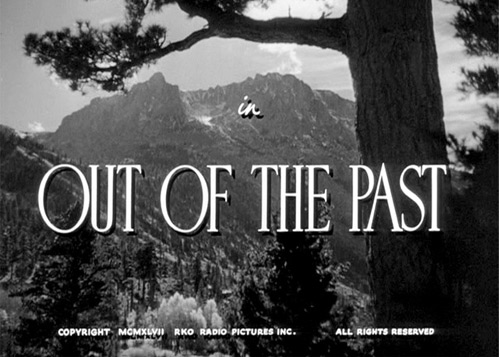 The film begins in bright California sunshine as a convertible rolls into the small rural, rustic town of Bridgeport, California. Locked somewhere between Lake Tahoe, Reno and far away from L.A. Its latest visitor is an elder errand boy for a higher power looking for Jeff Bailey. Superbly realized by Robert Mitchum. Quiet, unassuming. Just wanting to get by while seeing the town’s naive ‘Good Girl’, Ann Miller. Played well and memorably by Virginia Huston. Who knows nothing of Jeff’s past and whose parents do not approve. Though they wholehearted approve of local policeman, Jim. Well and briefly played by Richard Webb. The errand boy and Jeff talk. Jeff agrees and takes Ann with him. The long road trip allows plenty of time for Jeff to fill Ann in on his past as a private investigator in New York who had once rubbed elbows with that higher power. Failed mobster, Whit Sterling. A role creepily brought to life by Kirk Douglas. Absolutely reveling in his well toned physicality as he dutifully fends off subpoenas and possible future federal investigation. Whit needs to get his house in order. And to do that, his old (kept) girlfriend, Kathie needs to be found. Kathie may or may not have shot Whit and absconded with $40,000. May have headed south and may or may not be hiding in Acapulco. 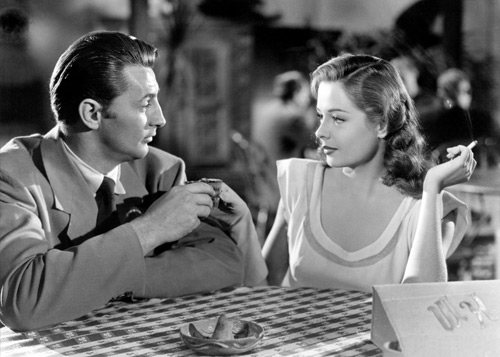 Jeff slinks into Acapulco and begins haunting the local bars and cantinas. Striking gold very early as Kathie makes her entrance from scorching afternoon sunlight into the bar’s soft shadows. Radiating beauty and sensuality with practiced fluid ease. To say that Jeff was hit by a lightning bolt would be understatement. Jeff strikes up a conversation that quickly evolves into acquaintance and a torrid love affair. Pillow talk slowly reveals Jeff’s true purpose. Kathie denies shooting Whit, but hints that the two of them could run away together with the forty grand.

Jeff goes to his hotel room to pack and finds Whit and the errand boy waiting for him. Jeff asks to be taken off the case, but Whit will not take no for an answer. Jeff then lies. Saying that Kathie slipped through his net and is on a steamer headed south. Whit lets Jeff go and soon, Jeff and Kathie are headed to San Francisco. Where they try to maintain a low profile. Until they are spotted spending the day playing the ponies by Jeff’s old partner, Fisher. Played with oily, thuggish aplomb by Steve Brodie. Who is given the slip while quickly putting two and two together and smelling money. 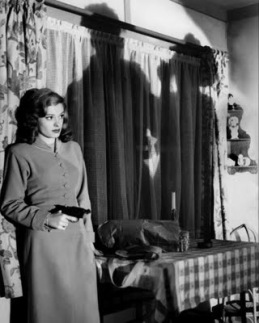 Jeff and Kathie split up and when Jeff arrives at their rural bungalow. Shadowy, angular Noir kicks into high gear as Jeff finds Fisher waiting with Kathie. Fisher wants a piece of what Jeff and Kathie have to keep quiet. Punches are thrown. Many connect. More heard than seen. Except for the expression on Kathie’s slowly smiling face. Fisher drops his pistol. Kathie picks it up and kills Fisher, much to Jeff’s dismay. As she splits to leave Jeff to clean up the mess. After things are tidied up. Jeff happens upon Kathie’s bank book and finds a recent deposit of $40,000.

Fully briefed in, Ann waits as Jeff meets Whit for a final proposition. Away from the prodigal girlfriend, Kathie’s eyes and ears. It seems that things have gone from bad to worse in regard to Whit’s organization and the feds. The IRS is breathing down Whit’s neck openly discussing prosecution for tax evasion. An affidavit about a shady land deal is being kept by Whit’s lawyer, Leonard Eels. Who is using it to blackmail Whit. Jeff correctly figures that Eels also has Kathie’s affidavit implicating Jeff in Fisher’s murder.

Nightmare Alley ramps up as Ann returns to Cambridge and Jeff heads to San Francisco that night for a bout of tailing, stalking and skulking about. Avoiding Kathie as Jeff makes off with the lawyer’s papers and heads to Bridgeport. Kathie feels the walls closing in. She dispatches Whit’s errand boy to kill Jeff, but the attempt is thwarted. While Jeff drives to Lake Tahoe and talks Whit into turning Kathie over to the cops for Fisher’s murder. Before the deal is sealed, Jeff discovers Whit shot dead. 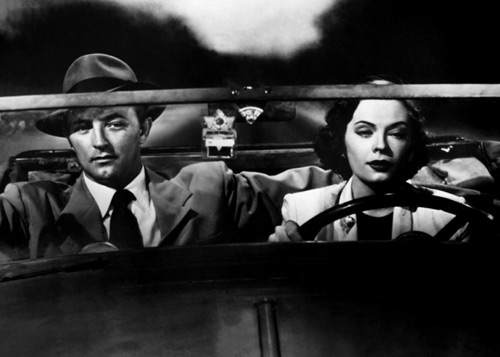 Before a word can be spoken, Kathie announces herself in charge with a superb coup under her belt. Then gives Jeff and ultimatum. Stay with her or face three murder raps. Whit’s. His errand boy and Fisher. Jeff agrees, but has time to make a quick call to Jim and his officers to set up a roadblock. As the two roll up on it, Kathie shoots Jeff. The police open up. The car crashes and the police find Jeff and Kathie dead amongst the missing forty grand.

What Makes This Film Good?

Where to begin? A superb screenplay by Daniel Mainwaring based on his hard boiled novel, Build My Gallows High with James M. Cain close by to kibitz. Lateraled to the machinations of Nicholas Musuraca and the little to no budget, magic pedigree of Jacques Tourneur’s Cat People and  I Walked with a Zombie. A master of limited lighting, smoke and myriad shadows. Instinctively aware of benefits of sunlight to accentuate the positive. And the variations of its absence to titillate the darker side of ominous tension and fear. Well versed in how emotions play into a dream scape of his own making. That appears familiar, yet slightly off kilter and other worldly once the action moves to San Francisco at night. In other words, Grade A Prime Noir! 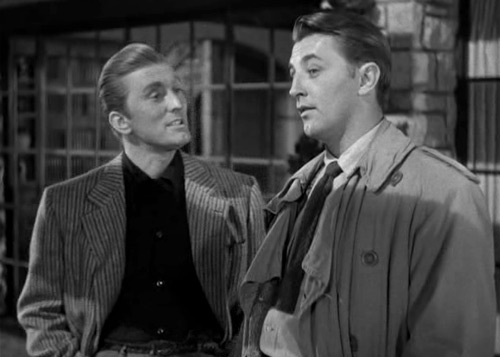 A story that starts out at a regular pace, but slowly starts to wind tighter and tighter once Jeff and Ann begin their road trip to Lake Tahoe. And Jeff begins telling his sordid tale in flashback with occasional narration. Where nothing and no one is as it seems.The first hurdle is reached with Kirk Douglas and his smooth and oily, somewhat intimidating Whit Sterling. Swelled, broad chest and all. Obliquely speaking in cautious sentences that rarely connects point A to B. Lest there be microphones connected to the law close by. Radiating supreme confidence as his empire shows cracks from strain and threatens to fall.

Aided by Roy Webb’s sometimes eerie orchestration that seethes with mood when Jeff and Kathie are together. Deftly focusing the attention of the audience throughout. Kudos to Darrell Silvera’s sometimes spartan set direction played against Edward Stevenson’s choices in sheer, opulent, flattering gowns for Jane Greer’s Kathie.

Robert Mitchum well in his prime. Seeming incredibly tall and nearly as wide across. His face and body intersected by shadows. Proving to the world that he was made for Noir and foggy, rainy San Francisco nights. Snap brim Fedora, Trench coat and all. Not quite ready for the bad craziness that would plant him on the map with Night of the Hunter. Mitchum reveals more of himself and his character in 97 minutes than in the lion’s share of his works. Relying on his physical presence to get his message across. Occasionally offsetting that with wisps of smitten, shambling, puppy dog silliness after he’s fallen Hook, Line and Sinker for Jane Greer’s femme fatale, Kathie. Knowing this relationship won’t have a happy ending. Though enjoying the ride and really not caring as he plays every card in his hand and still comes up short.

Jane Greer setting the bar incredibly high for all later gorgeous, manipulative women in film. Using elegance and poise to catch the attention of her prey. Then using raw sensuality to keep him well and fully trapped. Shrewd and obviously used to getting what she wants. Greer’s Kathie Moffat does whatever is necessary to stay one step ahead. And looks great doing it!

Considered by many to be the crème de la crème of Film Noir. Out of the Past along with Detour set and exceeded many of the ground rules for Film Noir. Basically due to budgeting. Lighting cost money. So, the fewer lights that are required. The more money is saved. In this film, that premise is writ large. Relying on Sunlight for scenes in and around Cambridge. While leaving San Francisco shadow slashed and swirling in fog. Tourneur’s natural playground.

Creating a gem that was nominated for the National Film Registry in 1947 and was selected in 1991.

Thoughts on Out of The Past? Do share ’em in the comments.