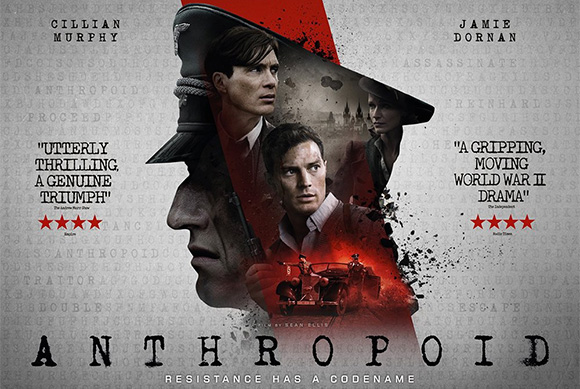 I love historical-based films that really made you want to read more about the actual events. Anthropoid, based on the true story of Operation Anthropoid to assassinate SS General Reinhard Heydrich, is one such film. WWII history buffs would surely know about the ‘Butcher of Prague’ monster that was Heydrich. He’s known as the main architect behind the Final Solution, the Nazi’s plan to exterminate all the Jews in Europe. “It’s assassination, not murder,” one main character said about Heydrich early in the film, “murder implies he’s got a life worth living.”

To say this is a dangerous operation is putting it mildly. Now it would be appropriate to call this select group of Czech commandos ‘Suicide Squad’ because none of them have special powers and there’s no rescue mission after they carry out their operation. The film center on Jozef Gabčík (Cillian Murphy) and Jan Kubiš (Jamie Dornan), a pair of Czech paratroopers who were dropped in Czechoslovakia. Right from the start, this film was suspenseful and intense. As Gabčík’s foot was injured when he landed, they had to find shelter and medication, as well as face traitors who threaten to expose them.

The two Irish actors gave a compelling and very human portrayal of the two main paratroopers. I can’t say if their Czech accent was spot on, but at least it wasn’t distracting. I was most impressed with Cillian Murphy who always gives an understated but captivating performance. Gabčík is the more experienced of the two, and I learned later that Kubiš actually replaced the original soldier who was injured in training. I’m not as familiar with Jamie Dornan (nope I don’t care to watch that Fifty Shades movie), and at first I thought he’s too much of a pretty boy for the role. But I think he acquits himself well, showing the inner struggle and anxiety of carrying out the mission. Kubiš’ hand tremble as he tried to shoot a traitor, but later on he fought valiantly just like the rest of the resistance group.

Anthropoid is appropriately gripping and intense, but not overly somber. The two men, despite knowing it’s a suicide mission, did fall for two women whom they met during the operation, portrayed by Charlotte Le Bon as Marie and Anna Geislerová as Lenka. I was more drawn to the more restraint relationship of Gabčík and Lenka, but I’m glad the romance never overshadowed the real story or took the focus away from the main mission. Toby Jones and Harry Lloyd particularly stood out from the resistance group. It seems that Jones’ become a top choice for WWII-related roles with accents.

There are two main parts to the story, the events leading up to the assassination event and the aftermath. Filmmaker Sean Ellis (who co-wrote the film with Anthony Frewin) stayed true to the historical event, which some critics call boring and by-the-numbers. Now, the filmmaker might lack narrative ambition, but I have no problem with the decision to stay close to the real story. I do think there’s enough drama and stylistic elements that separates this from a documentary. I find myself on the edge of my seat practically the entire time, as even the slower moments of just people talking and planning the operation itself is brimming with suspense that they could get caught at any moment. There’s also an apparent conflict within the Czech resistance group, as some fear (reasonably so) that the Nazi would destroy their country in retaliation. 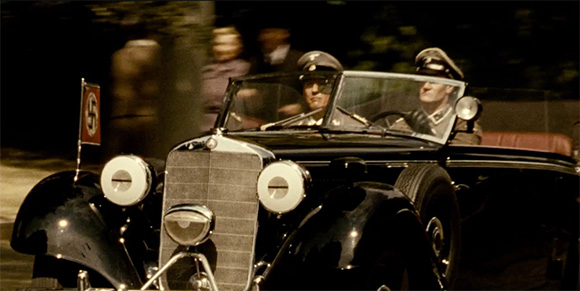 The actual assassination itself was pretty well-staged. I already knew what happened from reading about it, but seeing it portrayed on screen was still quite thrilling. I guess one lesson from this is they ought to get a proper weapon from America instead of using the British Sten gun that’s apparently prone to jamming. The group originally thought they had failed this mission, it wasn’t until a week later that they found out Heydrich’s fate. Some historians wonder if this covert operation was worth it, considering the huge cost Czechoslovakia paid in its aftermath.

Two Czech villages are leveled to the ground and over 5000 Czech people were brutally killed following Heydrich’s death. But as the famous quote says ‘All that is necessary for the triumph of evil is that good men do nothing,’ it’s no doubt these men were true heroes. They fought bravely for their country at the cost of their own (as well as their families) lives. Even if that mission made the Nazi top officers (even Heydrich’s bosses Hitler & Himmler) think they’re not so invincible after all, who’s to say it wasn’t worth it? The sheer brutality of Germany’s reprisal also led to the Allies to dissolve the Munich Agreement.

I wouldn’t say this is an enjoyable film given the harrowing subject matter, but I was engrossed in the story throughout. There’s a particularly brutal torture scene that warrants its R-rating but overall it’s not loaded with violence or gore. The group’s last stand at the crypt of a Czech Orthodox church is especially intense but still grounded, not resorting to typical Hollywood bombast. The sepia-toned film is beautifully-shot on location in Prague and the music adds a haunting atmosphere to the whole operation.  The 1940s costumes and vintage set pieces adds authenticity to the period. I’d say this is a pretty stylish film despite its small budget of $9 million.

I’m glad I saw this film on the big screen. It’s an important subject matter that is worth learning about and it certainly made me want to learn more about the actual events. It may not be flashy or spectacular but Anthropoid is a solid and fascinating film. Apparently Ellis started working on this film in early 2000s after seeing a documentary and his passion on this topic showed on screen. This film also made me itch to go to Prague and I definitely would visit the historical locations featured in this film.

What are your thoughts on Anthropoid?