Thanks to Andy for inviting me to My Movie Year blog-a-thon. This is the second time I’ve participated in Fandango Groovers’ blog event since the massively popular Desert Island DVDs. Below is the simple rule for the post:

All you have to do is pick your favourite year for movies and back I up with five classics from that year, no more no less. You can do as much or as little as you want with your selections; a simple list, images and posters, reviews, trailers. Or anything else you can think of.

It’s quite a daunting task as most of the movies I love come from different decades. I actually didn’t see all that many movies back in college, but I pick the year 2000 as this is the year where I moved in to my first ever house after living in one apartment after another in college and shortly after graduation. I didn’t watch a lot of movies on the big screen then either, but it turns out a lot of movies released in 2000 have become one of my all time favorites. So here they are:

I can’t possibly NOT include this movie. I mean, I’ve always LOVED swords and sandals movie ever since Ben-Hur, and this one has such a fantastic story and wonderful performances all around. I even picked this as the subject for the blog-a-thon ‘Movies that makes going to the movies suck‘ because it’s been copied so many times and studios are launching similar type of movies to capitalize on its popularity.

But this often-quoted Ridley Scott masterpiece remains on top in this genre and to this day I’m still enamored with it as the first time I saw it. It’s one of those movies that has the whole package, everything from the story, dialog, set pieces, performances, and even the soundtrack makes up for an epic entertainment.

Russell Crowe gave an iconic performance, even his name Maximus Decimus Meridius is a classic. Equally memorable are Joaquin Phoenix as the despicable incestuous Commodus, and the more I watch this movie the more I appreciate all the character actors that make this movie great, most especially Derek Jacobi with his theatrical line delivery. It’s not as popular as the others, but I pick this line as one of my favorite movie quotes of all time. 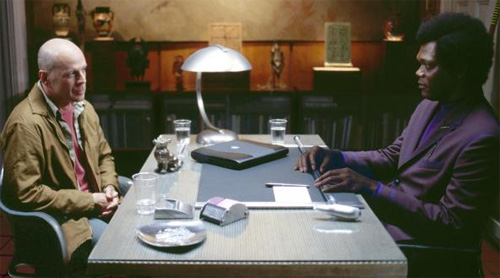 I LOVE this imaginative take of a superhero movie. People tend to mock M. Night Shyamalan’s these days but I’m still willing to give him a pass because he’s made some creative work in the past, especially this one.

An intriguing concept that’s brilliantly executed, Unbreakable is a quiet but suspenseful thriller that’s rich in character development. The astute cinematography adds so much to the eerie and mysterious tone of the film, in many occasion, it even help tells the story in such a breathtaking way. That scene where Elijah falls on the stairs of the train station is such a heart-wrenching scene… it’s as if I could feel his pain as he breaks nearly every bones in his body. It’s also one of those movies where it’s not a simple good vs. evil kind of story, and we can’t help but feel sympathy for the bad guy.

Do you know what the scariest thing is? To not know your place in this world, to not know why you’re here. – Elijah Price

It shows that Bruce Willis and Samuel L. Jackson certainly can act if they choose to. Both seem to gravitate more for the action-packed stuff and sure they’re good at it, but I’d love to see them do something more understated like this again. 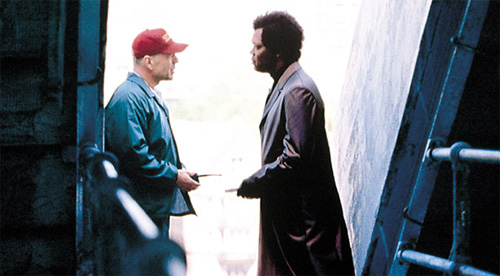 Oh, and I actually do like the ending, it’s unexpected and definitely made you go ‘whoa’ the first time around. But unlike Sixth Sense, it doesn’t lose its impact even after repeated viewings.

When I first saw this, I had never seen Wallace & Gromit before but I absolutely adore this Peter Lord and Nick Park’s creation. It’s odd since I’m usually not into claymation, but I think this movie is just so fun and joyful to watch. Inspired by The Great Escape, the chickens led by Ginger rebels against against the evil Mrs. Tweedy’s farm with the help of Rocky the rooster.

Right from the start, I was so enthralled and empathized with the poor ‘imprisoned’ chickens, as they’re depicted as having humanly activities like knitting, dance, bicker with one another, and seemingly having more lively existence than the humans at the farm.  The dialog is sharp and funny, with hilarious yet poignant lines like “I don’t want to be a pie.” or “We’ll either die free chickens or we die trying.” The voice cast are a hoot, especially Julia Sawalha and Mel Gibson as Ginger and Rocky.

It’s definitely one of my favorite animated features of all time. I even feel a bit guilty eating chickens for a while after watching this, especially chicken pot pie! 😀

I think I’ve talked about this movie quite often. It’s always on my list of favorite rom-coms, and I even dedicated a whole post for it. This movie doesn’t follow the typical formula of a rom-com, in fact it starts out with a tragedy. But yet it’s a joyful movie despite its poignant subject matter, filled with a wonderful depiction of family live, sincere friendship and a love story between two people who’ve gone through a lot by the time they find each other.

Both David Duchovny and Minnie Driver are wonderful here, they’re not your go-to actors for this genre which is a shame as they’re so natural here. Same with director Bonnie Hunt as she is quite adept with creating wonderful characters and engagingly funny dialog. It’s too bad that this is her only feature film in her resume. Oh, and the soundtrack is wonderful, too!

I readily admit that I have a penchant for superhero movies, and the mythology and the allegory with the reality of our world of the X-Men universe is particularly fascinating to me. I absolutely loved it when it first came out and both my hubby and I were hugely anticipating it. Fortunately, it didn’t disappoint and it’s still good after repeated viewing. Bryan Singer made superhero movies not only cool but has something meaningful to say. It’s intelligent AND fun.

The casting is key here, from hiring two British thespians as the two leaders of polar opposites — Ian McKellen and Patrick Stewart — to taking a chance with a then-unknown Aussie actor Hugh Jackman as the tormented Wolverine. He may be indestructible but he’s still vulnerable and Jackman’s gruff but soulful portrayal won him many fans and launched his career. He’s got an undeniable chemistry with Famke Janssen as Dr. Jean Grey, which makes their unrequited romance quite irresistible. 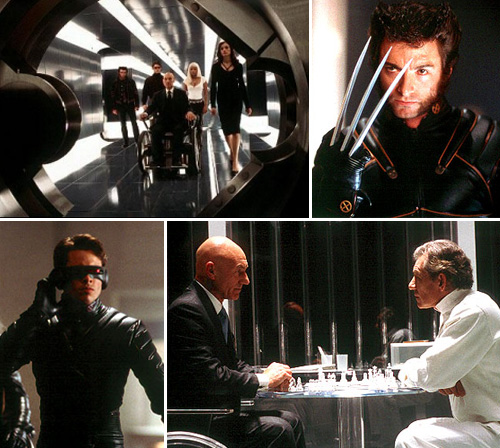 It’d be nice if Singer stays on throughout the trilogy, then we’d have three solid movies in this franchise. But the consolation is that he came back, albeit as a producer, in the excellent X-Men: First Class, which has a lot of the great things I love about the original and then some!

I almost picked this year because I absolutely adore Ang Lee’s Sense & Sensibility, plus it’s also got two other dramas I love: Circle of Friends and A Walk in the Clouds. I also like Die Hard with a Vengeance, The Usual Suspects and Se7en a lot, but in the end I feel like I have more affinity for the five movies I picked for 2000.

…
Thoughts about the movies listed here? Now, what year would YOU pick?