Happy Monday all! How’s your Easter weekend? Did you get any time off? Unfortunately, it’s not a company holiday where I work, but it certainly didn’t dampen the special meaning of this holiday for me.

Well, I did get to the cinema on Saturday and this weekend I actually saw two movies I wasn’t initially interested in before, but suffice to say I’m glad I gave both of them a shot. Interestingly both are Disney movies, which is totally unplanned. I think the last movie I saw from Disney was Tangled almost a year ago.

Oh, we’ve also got Netflix streaming so finally we got the chance to catch up on shows we’ve been meaning to watch for a while, namely BBC’s Sherlock! I was intrigued by my friend Novia’s post on one of the episodes. Seems like a lot of people LOVE this series and I can totally see why. I’m so hooked now, the writing is so clever and witty, and of course the lead actors Benedict Cumberbatch (one of my new fave actors) and Martin Freeman are absolutely terrific. I’ll be posting about this series in the near future, surely.

Ok, I feel that I must confess that the reason I wasn’t initially interested in this movie is because I didn’t really watch The Muppet Show growing up, I mean my hubby and I were wondering what the difference was between that show and Sesame Street! 😀 But of course, there are a few characters I’m familiar with, and that is Kermit the Frog and Miss Piggy, and that’s about it.

Truth be told, I was quite surprised by how much people LOVE The Muppets, I mean this movie was a box office hit and a critical darling, garnering 96% on Rotten Tomatoes. My blog friends were egging me on to watch this (you know who you are) and so on Friday night, my hubby and I were looking for something wholesome to watch on Good Friday and this movie just seemed like the right choice!

The story begins with Walter, the world’s biggest Muppet fan, and his friends Gary (Jason Segel) and Mary (Amy Adams) on vacation to L.A. Though it was initially an anniversary celebration for Gary and Mary, it ended up being all about Walter and his puppet idols when he inadvertently uncover an evil plan from oilman Tex Richman (Chris Cooper) to knock down the Muppet Theater and drill for the oil  beneath it. The solution to such predicament is to raise $10 mil to save the theater, and the only way to do so is to stage The Greatest Muppet Telethon. 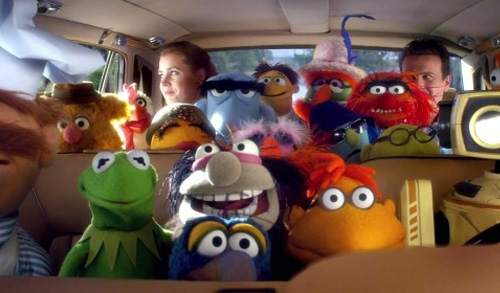 It’s quite fun to go along the journey of Walter & co. along with Kermit to find the rest of the Muppets. I heard an interview w/ the writers of the movie, Jason Segel and Nicholas Stoller on NPR that the only way to ‘alter’ the essence of the Muppet characters is to introduce ‘doppelgangers’ of the original ones, thus the Moopets, with only Fozzie as the only one from the original show.

As with any Disney musicals, there are plenty of song and dances here, and some are totally unexpected! Really, it’s worth renting just to see Chris Cooper rapping in a hilarious scene that came out of the blue!! Oh that was a hoot to see the normally-serious actor bursting into a hip-hop number, with lyrics like “I got more cheddar than some super-size nachos/got cash flow like Robert has De Niros,” and managed to do it with a straight face!

There are plenty of cameos in this movie, but I’m glad I didn’t know who they are going in which adds to the surprise. The human characters obviously take a backseat to the Muppets, though both Segel and Adams each have their own musical segment that are pretty enjoyable, especially the Man or Muppet one that’s funny but quite touching as well. It deservedly won an Oscar for Best Original Song.

The movie also ends on a high note with telethon itself and that famous song The Rainbow Connection, which of course magically worked out so well despite the disastrous rehearsals. Hey, this is not the movie where it’s best to enjoy without asking too many questions, just sit back and enjoy the infectious festive fun of what’s in front of you.

Final Thoughts: Well, I’m glad I finally saw what the fuss is about this movie. I can see why these characters are so massively popular and director James Bobin and composer Bret Mckenzie did creator Jim Henson proud with this one. It’s highly entertaining and would definitely delight longtime devotees and new fans alike.

So what did you watch this weekend? And are you a fan of The Muppets, if so, what did you think of the movie?