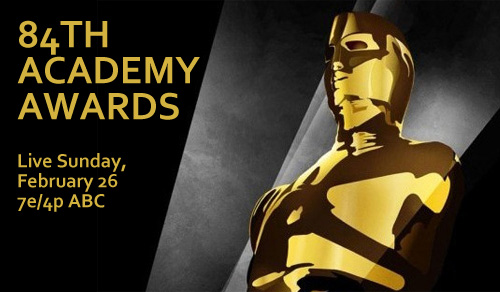 It’s less than 24 hours until the 84th Academy Awards. But hey as my friend David @ Never Too Early Movie Predictions just posted his predictions on Friday, I suppose it’s not too late until the presenter takes out the card from the Oscar envelope, right?

As I’ve posted in my nominees predictions, I missed the number of Best Picture nominees by one (I thought they’d go with 8 noms) and I thought Bridesmaids got in instead of War Horse. So clearly my predictions has no scientific value whatsoever, it’s just for the fun of it just to see how off base (or not) I’d be 😀 I’ve also talked about my reaction to the nominations in general on this post.

So, will Oscar make history tomorrow night by awarding both the lead and supporting female acting categories to black actresses? So far only five black actresses have taken home the statuettes, and only one of them for a leading role (Halle Berry in Monster’s Ball in 2001 (per Wiki). And will a silent film instead of a ‘talkie’ win Best Picture again in 85 years since Wings took that honor? Well, we’ll find out soon enough would we?

So anyway, below is the list of nominees and the one highlighted in gold is my predicted winners:*

Best Achievement in Visual Effects
Harry Potter and the Deathly Hallows Part 2
Hugo
Real Steel
Rise of the Planet of the Apes
Transformers: Dark of the Moon

* I left out a few categories such as editing/sound effects as well as documentaries as I have not seen any of them to have any opinion on those.

Btw, allow me to indulge a bit here by sharing this video of my beloved Gregory Peck’s gracious Oscar acceptance speech for his role in To Kill a Mockingbird. Special thanks to my friend Aurora who tweeted me the link last Friday, bless her heart!

All right, so are you going to watch the telecast tomorrow night? I’m going to see if I have the energy to live blog tomorrow. Stay tuned folks 😀

16 thoughts on “Counting Down to Oscar 2012 – Winner Predictions”