Hello and welcome to the eve of the Oscar nominations or Oscar night, namely the night only Hollywood folks and movie buffs give a damn about 🙂 Truthfully I almost forgot about the Oscar nominations if it weren’t for the Classical NPR station I listened to during rush hour traffic. They actually ran a special program called ‘Roll Credits’ where they played some Oscar-nominated scores, including one from The Big Country that’s on my top five list from Gregory Peck films.

All kinds of predictions have been circulating all over the place, and I’ll get to that later, but before that I just want to share some Best Picture history/trivia I learned recently. Now, out of a total of 24 categories given out at the Academy Awards, the one on everyone’s mind is ‘which film is going to win Best Picture?’ That’s why it always came on last as people’d want to stick around to find out which movie take top honors.

The big question this year is…

How many Best Picture nominees will there actually be??

As you know, a couple of years ago, Oscar expanded the Best Picture nominees from 5 to 10. Now there’s yet another mind-boggling qualifying system… A film must receive at least 5% first place votes in the nominating process to qualify as one of the 5 to 10 nominees (per hitfix.com) so there might be somewhere between 5-10 Best Picture nominees this year.

Here’s just a brief history of the Best Picture category specifically, thanks to AMC Filmsite:

The Oscars®, have been presented annually since 1927 (the first awards ceremony was held in May 1929) by the Academy of Motion Picture Arts and Sciences (AMPAS). 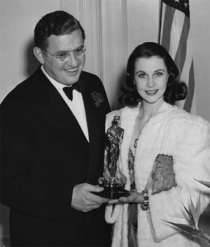 The ever so fascinating—as well as discombobulating—tidbits about Best Picture nominees is the genre biases:

Most Likely to Be Nominated (or Win) For Best Picture: Serious dramas or social-problem films with weighty themes, biopics (inspired by real-life individuals or events), or films with literary pretensions are much more likely to be nominated (and win). Glossy, large-scale epic productions with big budgets (of various genres) often take the Best Picture prize.

Least Likely to Be Nominated (or Win) For Best Picture: Action-adventures, family-oriented animation, “popcorn” movies, suspense-thrillers, science-fiction, superhero films, horror, comedies (including teen comedies), Westerns, foreign-language films, and spy thrillers are mostly overlooked, as are independent productions and children’s films (although there have been a few exceptions).

Anyway, I could go on and on as I love movie trivia, so I invite you to check out the comprehensive Oscar history on AMC Filmsite.

So, here are my best guess of Best Picture Nominees, just for the fun of it really as I haven’t seen everything that might considered. But hey, I won’t let that stop me 🙂 I just take a wild guess that there’ll be eight nominees, so here goes (in alphabetical order):

Wildcards:
…
* The Artist is the one I’m rooting for this year and I have a feeling it just might be the picture that’ll sweep the Oscars this year.

Any thoughts on Oscar or Best Picture noms specifically? Feel free to make your own predictions before the nominees are announced tomorrow morning at 8:30 AM eastern time.