Special thanks to my pal Kevin a.k.a Jack Deth for another in-depth review!

Make sure you check out his profile page under FC Contributor’s tab and find out more about his love for film.

‘Extreme Prejudice’ is a little known gem directed by Walter Hill and written by John Milius, an updated drugs-across-the border western. Starring Nick Nolte as Jack Benteen, a straight arrow, incorruptible second generation Texas Ranger who doesn’t say much. Lets his silent stare and scowl, when appropriate, handle most situations that his Colt .45 ACP  may be a bit too loud, messy and devastating for. In short, Benteen is Gary Cooper in High Noon, only more so with a larger hat.

Benteen’s jurisdiction cover just one heck of a lot of desert close to the Mexico border, with not a whole heck of a lot in between. Operating out of a small quiet town with a bank, barber shop, hardware stores, school and small businesses, where everyone who hasn’t left knows everyone else. With its usual raining,  miserable Saturday night fights in outlying Honky Tonks and dirt floor bars. One good old boy has the sad misfortune of running afoul of Benteen and his partner and mentor, Sheriff Hank Perason, played by the notably  gruff Rip Torn long before his playing Zed in ‘Men In Black’. The good old boy/drug smuggler pulls a gun on Benteen and Pearson and is killed in self defense, which slowly gets the ball rolling for the the rest of the film.

On the Mexican side of the border is Cash Bailey, Nolte’s childhood friend, a drug Kingpin and possible snitch or undercover DEA agent who’s in way over his head. He’s played flawlessly by Powers Boothe, fresh from his HBO mini-series Marlowe, resplendent in a white suit and Stetson, yet radiating an aura of corrupt sliminess. Cash runs a fair-sized Cocaine smuggling operation that rakes in huge amounts of money that requires laundering. 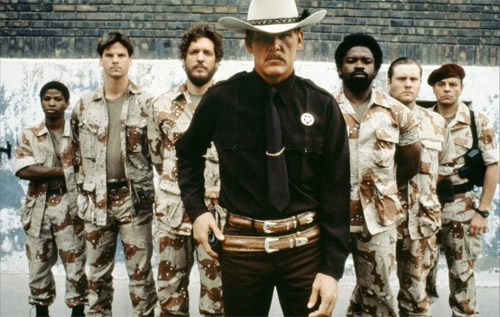 Cue the crooked Bank Manager and possible degenerate gambler who’s been bought and paid for by Cash Bailey, and whose bank is in the same small south Texas town that contains Benteen’s Rangers station and the table has been set for the entree. A small cadre of US Army special operators who are officially dead enter the mix. Led by Michael Ironside and top kicked by Clancy Brown. They make their entrance at a Municipal Airport with appropriate aplomb and a bit of raunch, before settling down to business. The deliberate destruction of Cash Bailey and his entire operation, through methods legal or extra-legal. I’ll let you do the math.

In the interim, Nolte and Hank Pearson debate a reluctant confrontation with the good old boy’s brother. The tête-à-tête is cut short when the brother and several friends pour out of the clapboard General Store with rifles and handguns blazing. In what should be a lopsided win with shotguns, M-16s and pistols, The Ranger and Sheriff hold their own and more with Benteen’s .45 and lever action Winchester backed up by Pearson’s 12 Gauge pump shot gun. Unknowingly being watched by Michael Ironside’s Col. Paul Hackett and Clancy Brown’s MSgt. Larry McRose.

The two watch Pearson fall and the brother die as the survivors flee, only to be ambushed and dispatched by Hackett and McRose shortly thereafter. A mistake is made and shell casings are not policed up and Hackett’s hand is tipped through investigations later on.

As Benteen plays catch-up, another character is introduced. Maria Conchita Alonso as Sarita. The teenage girl who carried a torch for Benteen and Bailey and probably still does. All grown up and signing at a Cantina and who will figure prominently toward the story’s end.

Comes the dawn and the lesser know special operators have staked out the bank with what would now be less than first generation tactical and spy gear in preparation for a heist. The primaries go in. People are frightened as money is stolen and Safety Deposit Boxes rifled. Hackett confronts the crooked banker and kills him while a faraway barn blows up as a diversion. One of the lesser operators is killed and the getaway is disrupted by Benteen, who locks up William Forsythe at his borderline psycho best as Sgt. Buck Atwater and Matt Mulhern as Declan Coker, their heavy weapons man.

Benteen and Hackett finally meet after the shell casings left that the ambush reveal an Army pedigree. Neither trusts the other as Atwater and Coker report on everything they see and hear to Larry B. Scott’s Sgt. Charles Biddle, their tech guy from their jail cell at the Ranger station.

Deals are made, though Hackett would gladly like to see Benteen dead. Since Benteen doesn’t fit in Hackett’s agenda. As Atwater and Biddle are released and Sarita disappears, Benteen joins Hackett and his crew for a trip south of the border. For a protracted confrontation inside a massive adobe fortress amongst a sizable Mexican peasant army that would would make Sam Peckinpah envious.

Benteen just walks right on in, ready to talk Bailey into returning with him sans Sarita. Though willing to end it all in a  showdown with Bailey if push comes to shove.

Only to have the festivities interrupted as ALL HELL BREAKS LOOSE!

Hackett and his boys open up with everything they have and whatever else they can get their hands on. Many, many of Cash Bailey’s soldiers fall in a modern shoot ’em up to easily rival the best of  The Wild Bunch. Biddle and Coker pick off strays as McRose catches Hackett literally red handed sticking a knife in Bailey’s befuddled book keeper. A deal is offered and rejected as a stooge stumbles by. Shots are fired and Hackett slips away.

Betrayed, the operators are evenly divided in taking out Bailey’s army and Hackett. Who absorbs many, many hits before McRose unloads with his 12 Gauge. The operators are picked off one by one. The smoke clears and Cash returns with a truck full of soldiers ready to pick up where they left off before all of the fireworks. Undaunted, Benteen tries to talk Bailey into coming back to the US, but Bailey is in too deep and fires. Benteen empties his .45 into his boyhood friend. Reloads and listens to an ultimatum from the new Jefe.

Leave and don’t come back. It seems that the locals didn’t much care for or trust the gringo, Cash Bailey to begin with. Better to keep the operation completely Mexican. Benteen agrees and he and Sarita saunter off into the sunset.

What makes this movie good?

A superb ensemble cast of proven character actors driving the story forward between well timed and executed fights, bank heist and the final homage to Sam Peckinpah gunfights inside Bailey’s fortress. Toss in a plethora of great lines for all and sundry as lies stack on top of lies and the Alpha males vie for supremacy. Add the backdrop of a Ry Cooder-produced soundtrack. Conducted by Jerry Goldsmith as a full orchestra and you have the makings of a film not soon forgotten.

What makes this film great?

Nick Nolte, Powers Boothe, Michael Ironside, Clancy Brown and William Forsythe in a film that literally sweats Testosterone. Shortly before ascending into their own reserved niches in the firmament

Walter Hill at the helm directing men in a men’s arena. Allowing time for each cast member to shine and perform some of their most memorable work in what many consider a B- Movie, but is so much more!

Have you seen this film? So share your thoughts in the comments.