Every once in a while, there’s a movie that comes along that’s critics-proof. This is one of those movies. I love swords and sandals genre and I went in with the expectation for Tarsem’s visuals and Henry Cavill’s performance to wow me and it delivered on both counts.

Apparently I’m not the only one who didn’t heed the critics as the Greek mythology visual feast reigned supreme at the box office with $32 million. Now, with that in mind, let me give you a rundown of what works and what doesn’t with this film.

• Well obviously the visuals — the world Tarsem built is pure eye candy material. It’s artistic, bold, imaginative, which is what I had hoped from the first time I saw the first trailer. Given that this film shares the same producers as 300, the comparison is inevitable. At the same time, it’s got a pretty distinguished visual flair and style that’s entirely Tarsem’s. For one, Tarsem’s use of color is more vivid and rich, it’s like seeing a fine art painting, albeit a very bloody one, come to life.

There’s obviously painstaking details invested into building the sets and the costumes. The get-ups the gods wear as they watch mortals from way above the clouds are over the top but that’s the stuff of a fantasy flick. Apparently everyone has a Gold Gym membership up there in Zeus country.

• Henry Cavill’s on-screen charisma. Though I’ve followed his career for the past few years, this is the first time I’ve seen Henry carry a movie and I have to say he did a great job. It’s no doubt he looks the part as a peasant mortal chosen by Zeus to fight against the ruthless King Hyperion, but fortunately he’s got the confidence and gravitas to match those chiseled muscles.

• Mickey Rourke actually makes for a pretty brutal and vicious villain as Hyperion. The kind of enemy that makes your skin crawl with his sadistic shenanigans, especially to one traitor who comes to him and actually offered to help. He’s certainly more effective than Rodrigo Santoro’s Xerxes with all his gold body piercing. Hyperion is evil through and through and the relentless mano-a-mano fight between him and Theseus is quite rousing at the end.

• The special effects are definitely cool. Whenever the gods came down to earth, there’s a certain slo-mo technique used to illustrate just how much faster they move compared to humans, kind of like how in The Matrix, Neo is often shown as being able to move at lightning speed. I think it’s quite efficient and there are no annoying quick-cutting between scenes seemingly employed by every action directors. All the fight scenes involving Zeus and co. are incredibly bloody, but like 300, the stylized way they’re done makes ’em a bit more bearable to watch. I still cover my eyes a few times though.

• The supporting cast is quite lame, to be honest. Even British thespian John Hurt wasn’t really given much to do, but my biggest quibble is with Stephen Dorff. He tried to be this wisecracking sidekick, but I find him to be irritating and silly. Kellan Lutz and Isabel Lucas barely had any lines or anything worth writing about. Compared to the compelling actors who fought alongside Gerry Butler in 300: Michael Fassbender, Vincent Regan, Dominic West, and David Wenham, these pretty young things just pale by comparison.

• Freida Pinto is beautiful but forgettable… she did have more to do here than in Rise of the Planet of the Apes, but that’s not saying much. So yeah, she’s no Lena Heady. Even the sex scene is pretty ho-hum, it lacks passion and least of all, heart. Though guys surely remember Pinto’s body double’s derrière 😉

• Weak script — Tarsem’s story-telling skills doesn’t quite match his visual flair. The Fall was quite a disconcerting in terms of narrative, but there’s at least a strong connection between the two main characters. There’s not much going on between Theseus and Paedra, nor between him and any of the crews. Speaking of 300 again, the bond King Leo had with his soldiers make the nonstop battles mean more to the viewers than simply artistic amusements. I feel like there’s really not a whole lot at stake in Immortals. Of course the story tells us there is but we just didn’t feel it.
…
In my pal Scarlet Sp1der’s review, he mentioned that the stirring speech rounding up the troops pales in comparison to King Leo’s. I definitely agree with that, Butler’s certainly got that commanding presence that’s tough to beat. But to be fair, Leo has been a king for a long time, thus his troops were all ready to die for him, whilst Theseus is practically a stranger. 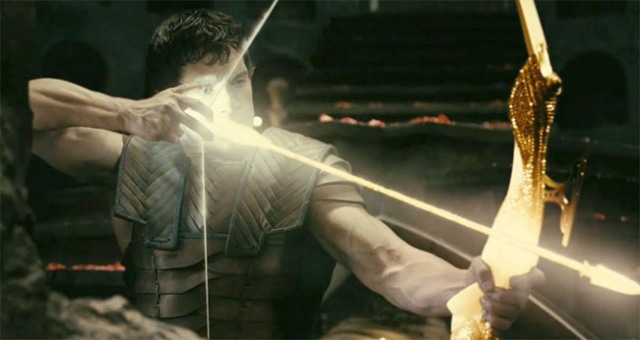 • Oh, and what’s with the Epirus Bow? I feel that for something so integral in the story, I find it odd that it somehow felt ‘forgotten’ by the end. The archery scenes are pretty cool though, I just wish they’d show more of those.

Immortals is more style than substance, but at least Tarsem did deliver on his promise of Caravaggio meets Fight Club, complete with the ‘what the heck is going on’ ending. So yeah, despite the flaws I’ve mentioned, it’s still well worth-seeing for pure escapism’s sake. It’s a well-crafted production that’s sure to please anyone who appreciates fine workmanship and classic design. A quick note about the 3D: I saw this in 3D and though it didn’t really add much to it, it didn’t detract from it either. I’d say you probably won’t go wrong seeing this in 2D but the showtimes for those are much less than the 3D ones.

Anybody else seen this one? Do share your thoughts on Immortals in the comments.