Exactly a month from now, on 11-11-11, Immortals is released. You probably already know that I’ve been anticipating this for some time. I was initially excited because Tarsem is directing (as I really like The Fall), but when Henry Cavill was cast, I am even more psyched!! 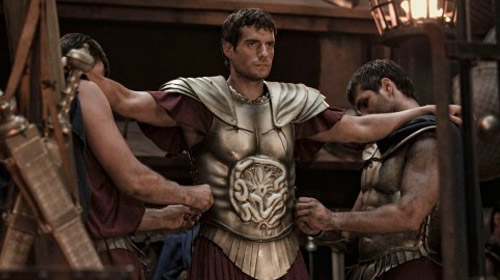 Yes the British actor is VERRRY easy on the eye, with his dark hair, blue eyes and tall, lean physique, he’s soooo my type, ehm. But looks can only interest me so far. Fortunately, after watching some of his interviews, it’s obvious he’s much more than a pretty face. Watch this featurette below of Henry discussing his lead character Theseus, as well as snippets of Tarsem and Luke Evans discussing his role as Zeus.

Immortals the Story Behind Theseus Featurette, posted with vodpod

…
I’m a big fan of swords & sandals movies and so this kind of movies is right up my street. Plus, with Tarsem’s visual flair this is likely going to be a visual feast in every sense of the word. Cavill is still relatively unknown now apart from him being cast as Superman in Zack Snyder’s Man of Steel. Unless you’ve seen him in The Tudors and notice him in Stardust and Woody Allen’s Whatever Works, this is likely people’s first major introduction to Cavill before Man of Steel comes out in Summer 2013. It’s interesting that Immortals‘ been compared a lot to 300 and Cavill’s going to be working with 300’s director next.

Well, I do think he’ll do a good job. He’s got such a strong on-screen charisma as you can see in the trailer so I sure hope he’ll continue to have a lasting and varied career in Hollywood post Superman.

What do you think folks? Thoughts on Henry Cavill and/or Immortals?