Happy Monday, everybody! It’s actually a Columbus Day holiday here, but no, I didn’t get a day off 😦

Hope you had a wonderful weekend, wherever you are. Well, mine was quite lovely. I took a much-needed blogging/computer break on Saturday to spend the entire day outdoors starting with a jog around the beautiful Lake Calhoun with friends, then off to a small town south of the Twin Cities to go hiking and take in the gorgeous Fall colors. This has got to be the best Autumn season ever with hardly any rain and temps holding in the 70s and 80s!

But guess what, despite my hectic weekend, I actually had time to see not one but two movies, no, NOT the weekend box office winner Reel Steel, not even sure I want to rent that one. I finally caught Midnight in Paris at a local indie theater, and The Beaver that’s been sitting on our counter for a whole week. 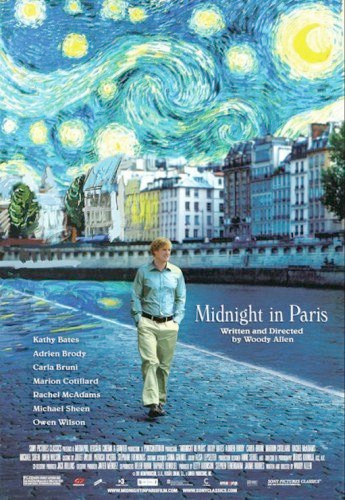 I feel that the less you know about this film the better, which is why I’m not going to go into the plot details too much and just leave you with this IMDb description:

A romantic comedy about a family traveling to the French capital for business. The party includes a young engaged couple forced to confront the illusion that a life different from their own is better.

For most people, the appeal of this film is likely to be the ever-so-prolific Woody Allen. But his work has been hit and miss for me so the appeal of this film for me is the enchanting city of Paris and boy, this film practically doubles as a tourism video for the City of Lights. Seems like Allen’s love affair with Europe continues [his last few films were filmed in London & Barcelona] and cinematographer Darius Khondji indulges him with gorgeous shots of his city muse.

I had some doubts about Owen Wilson in the lead role but he turned out to be perfectly cast as a disillusioned Hollywood screenwriter who calls himself a ‘hack’ and longs to finally finish his novel. His comic timing as Gil generates plenty of laugh in the scenes spent during the day with his fiancée Inez’s family and friends, but his wide-eyed bewilderment when the clock strikes midnight is even more fun to watch.

Again, I’m glad I didn’t know much about the plot as what Gil encounters from midnight until the wee hours is full of surprises! Checking out the characters’ name on its IMDb would easily give it away but I suggest you refrain from doing that unless you don’t mind being spoiled.

Like most of Woody Allen’s films, this one is comprised of a large ensemble cast including Kathy Bates, Adrien Brody and also feature a small cameo of French first lady Carla Bruni. I also didn’t know Tom Hiddleston [Thor‘s Loki] is in this one, so it was a pleasant surprise! The usually likable Michael Sheen and Rachel McAdams portray their unsympathetic characters quite well, Sheen especially as the smarty-pants college professor friend of Inez. Marion Cotillard is lovely as always and her role as the free-spirited French beauty Adriana seems tailor-made for her. Her scenes with Wilson are easily the highlights of the movie for me.

I’m so glad I finally caught this film before its theatrical run is over! My hubby was initially reluctant to see it but he ended up loving it as much as I did. It’s truly an enchanting and magical film that’s full of whimsical yet poignant dialog complemented by beautiful scenery. It’s quite predictable how Gil will come to his senses by the end, but his journey to get there is wonderful to watch. I’ll definitely be seeing this one again.

What did you think of Midnight in Paris?