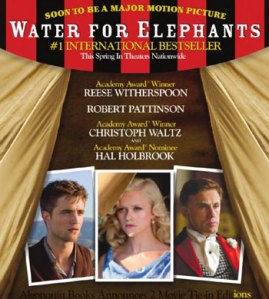 Happy almost-Friday folks! Wow, I just realize I haven’t posted ANY trailer since the Jane Eyre one last November. Heh, I guess I should be more consistent, but why be predictable? 😉

This movie has been on my radar since casting began, something about the story intrigues me. The movie is adapted from a novel of the same name by Canadian author Sara Gruen. Here’s the gist of the story:

Set in the the Great Depression, the story focuses on 90-something Jacob Jankowski as he reminisces on his youth working at the Benzini Brothers Most Spectacular Show. Upon his parents death, Jacob leaves his veterinary training and ends up becoming a vet at the circus. It’s there that he falls for Marlena, the beautiful circus performer married to the charismatic but vicious animal trainer, August. Jacob and Marlena’s shared compassion for a certain ‘un-trainable’ elephant makes for an unlikely trio and their bond becomes their only hope for survival.

Well I’m certainly glad to see Christoph Waltz in place of Sean Penn who was previously cast. Looks like August is a juicy role worthy of him instead of being a run-of-the-mill comic book villain you see him in The Green Hornet. But it seems to be a Hollywood tradition that a relative newbie is cast in a superhero movie following their award-winning turn. Go figure.

Reese Witherspoon as Marlena shows that she’s a versatile actress, jumping from her typical rom-com genre (as in the generic looking How Do You Know). Robert Pattinson must be delighted to be away from the Twilight set and actually get the opportunity to actually act instead of brooding and sparkling day and night. He looks pretty good here, he obviously has screen presence and he seems to have that melancholy, love-struck look down pat which I reckon works swimmingly for this role as young Jacob. Seasoned actor Hal Holbrook plays the older Jacob. I’m not as familiar with the director, Francis Lawrence (I Am Legend, Constantine) as I am with the screenwriter Richard LaGravenese, who penned the script for The Bridges of Madison County, The Horse Whisperer, Beloved, Freedom Writer and P.S. I Love You, among others)

A couple of interesting trivia courtesy of IMDb:
In a deleted scene of Vanity Fair (2004), Reese Witherspoon plays Robert Pattinson’s mother., but in this movie, they play lovers. Scarlett Johansson apparently turned down the role of Marlena, that’s a good thing in my book as I like Reese better as an actor. I am however curious to see how Andrew Garfield would fare as Jacob. He auditioned for the Jacob role but I guess he’s not considered bankable enough, yet. Just wait until Spiderman comes out and he’ll be in high demand.

Well folks, any interest in seeing this one?

20 thoughts on “Conspicuous Trailer of the Week: Water for Elephants”