From acclaimed Australian director Peter Weir comes a fact-based story centered on soldiers who escaped from a Siberian prison camp in 1940. The story was inspired by Slavomir Rawicz’s acclaimed novel, The Long Walk: The True Story of a Trek to Freedom, as well as other real life accounts and tells the adventure story chronicling the escape of a small group of multi-national prisoners of the Siberian gulag and their epic life-affirming journey over thousands of miles across five hostile countries. The cast looks pretty good: Colin Farrell, Ed Harris, Jim Sturgess, Saoirse Ronan and Mark Strong. Nice to see Ed Harris, haven’t seen him in quite a while. Apparently he’s just been cast in thriller Man on A Ledge which stars Sam Worthington, Elizabeth Banks, Jamie Bell, Anthony Mackie and Edward Burns (per Deadline). 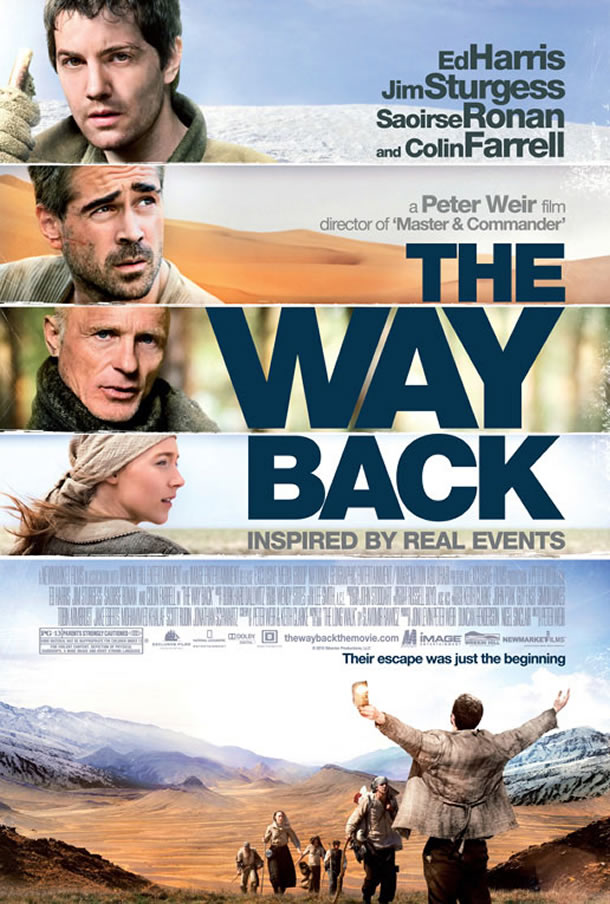 Weir, whose last movie Master and Commander was released seven years ago in 2003. I haven’t seen that one (which was highly recommended by Sam who list that as one of her top 5 Russell Crowe movies), but I love Dead Poets Society and The Truman Show. He also did another based-on-true-story drama set in my homeland Indonesia (set in the Sukarno era, our first president) called The Year of Living Dangerously, starring a young Mel Gibson, Sigourney Weaver and Linda Hunt.

Dez at Hollywood Spy posted the trailer last Monday, but now we’ve also got hi-res stills you can view @ Rope of Silicon.

Moviefone posted a full review from the Telluride Film Festival screening and had some great things to say about this movie:

The first half of The Way Back is Peter Weir at his hypnotic best. Always adept at breathing life into landscapes – see the frightening outback vistas of Gallipoli, the mythic Central American jungle of The Mosquito Coast, and even the idyllic false suburbia of The Truman Show – Weir all but personifies Siberia and (later) the Mongolian desert. They seem threateningly to keep pace with our human protagonists. The snow-covered trees and scorching sand dunes become the terrain of an alien planet. The mines of the gulag are a steam-spitting horrorshow scarier than anything in The Lord of the Rings. The film is extraordinary at seeing these places as its characters would; even the sweeping bird’s-eye views seem like an expression of their fear.

Looks like this is definitely one to watch come January of next year. Now, what’s your favorite Peter Weir film(s)?

27 thoughts on “Flix Poster of the Week: Peter Weir’s The Way Back”