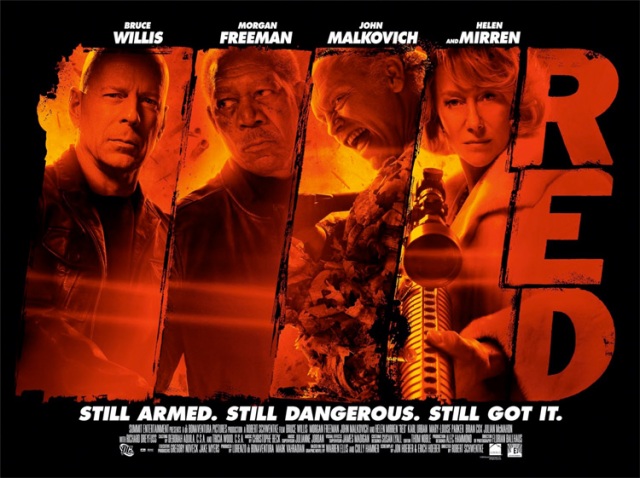 I saw this back in August on an advance screening. Before the movie began, they told us that the special effect wasn’t final yet, but I didn’t really mind as the main draw for me to see this is the cast, mainly Helen Mirren, Bruce Willis, Morgan Freeman, AND John Malkovich. I thought that even if the story is crappy, the cast would still make it entertaining. Glad to say I was right, and the story actually isn’t too bad. 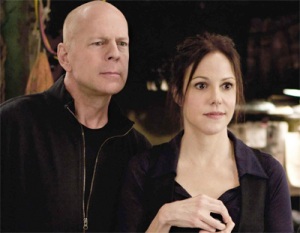 ED is a rowdy and facetious espionage action comedy. As I learned when I posted the trailer, apparently the decidedly the movie is a far cry from the ultra-violent Warren Elis’ comic series. The movie also expands the focus from Frank Moses (or Paul in the comic, played by Willis) to include Freeman’s, Mirren’s and Malkovich’s characters: Joe, Victoria and Marvin.

The four former CIA top agents have all (except Marvin) seemed to settle in their retirement life. Frank leads a pretty boring life in the suburbs all by himself, with only Sarah (Mary Louise Parker) from the federal pension-benefits office keeping him company via phone conversations. Suddenly, his peace and quiet existence is interrupted by a covert strike from a group of special forces. Willis can pretty much do this type of role in his sleep, channeling his Die Hard‘s John McClane, only with a slightly more deadpan mannerism, as he takes out every single one of his attacker with ease. 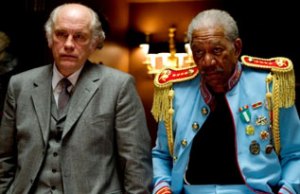 Soon we learn that the fact that he knew too much, the Agency wants him and his friends dead. So Frank goes on the road to find them, but not before he finds Sarah, as he reckons they will also target those close to him. Inevitably she gets entangled into the whole spy business as the team must use their collective experience to stay one step ahead of the people after them and expose the government’s conspiracy cover-up.

Parker is pretty funny as the befuddled Sarah who soon becomes Frank’s enthusiastic ally in his mission. I suppose if I’m chained to my desk at work daily, I’d be as eager to live it up a bit. Morgan Freeman, who’s as adept in comedy as he is in dramatic fares, also brings in the laughs in most scenes he’s in, including one where he gleefully ogles the retirement home nurse as she fixes the TV.  Looks like Joe is the most comfortable with his retirement life. Now Marvin on the other hand, hasn’t moved on much from his old life. He lives on an underground bunker and is extremely high on conspiracy theories—a result of years CIA’s LSD experiments, Frank tells Sarah. Malkovich relish his inherent nuttiness with panache. He’ 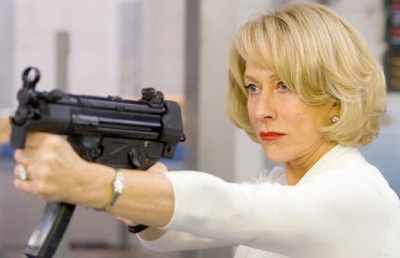 s truly a great comic relief, as he often is, and his over-the-top acting is put to good use here.

Dame Mirren doesn’t show up until about 45 min to an hour into the movie, but when she does, it’s such a treat! Her Victoria is a classy lady who seemingly enjoy her Martha-Stewart-like activities. But she too never quite gets over the high of being a spy, and confesses to Frank that she still takes contract jobs on the side. One of the movie’s highlights are the shootout scene from a hotel’s kitchen to the parking garage, it’s such a hoot seeing Dame Mirren dressed in a cocktail dress going all trigger happy with that big machine gun!! Her bad assery is a real scene stealer. She was quoted at ComicCon saying “It was great to have guns instead of words, …because long speeches are harder.” (per MTV blog) Methinks the dame ought to do more action movies! 🙂

Last but not least, there’s Karl Urban, the other non-AARP member besides Louis Parker. I’ve talked about how I was quite mesmerized by the New Zealander in this post, which prompted me to think he’d make a great Bond. His character as a young CIA officer tasked to bring Frank in is pretty one-dimensional, but he plays him with such amiable charm that makes me care for his character and the dilemma he’s faced with.

The best part of this movie is how everyone seems to be having a ball making this fun caper, which makes the ride so enjoyable even if it’s not always smooth. It doesn’t have the tidiest script, but the cast more than makes up for it. I don’t even mind paying to see this again in the theater!

Well folks, any of you planning to go see it this weekend?