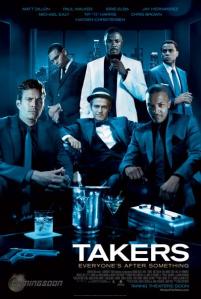 Well, whaddayaknow, Takers, the movie that was never on my radar is the box office winner this weekend. The first time I learned this movie existed was when seemingly the entire movie blogosphere cried foul over how bad their poster were. There’s bad, and then there’s BAD Photoshop job, and this one was beyond dreadful. Ok, so if you’re going to copy and paste Paul Walker’s head onto another person’s body, how hard can it be to find one that fits?? The other two guys next to him don’t fare better either as their necks seem to have been, um, taken? But hey, apparently the ‘takers’ got the last laugh. Maybe all that lousy buzz was helping them after all, y’know, I guess all buzz is a good buzz in Hollywood.

In any case, there’s been quite a few of ensemble-cast movies this Summer: The Losers, A-Team, and of course the mother load of them all: The Expendables. An ensemble cast is a cast in which the principal performers are assigned roughly equal amounts of importance and screen time in a dramatic production. Of course, though the lineup alone might entice one to see a given movie, not all ensemble-cast movies are created equal. Sometimes they don’t live up to the cast it’s made up of, no matter how spectacular it is. Case in point: NINE, which is too bad considering the people involved. But it’s nice to see when the cast works more than just getting ‘butts in seats,’ but actually elevate the story. Well, I think these five are good examples of that: 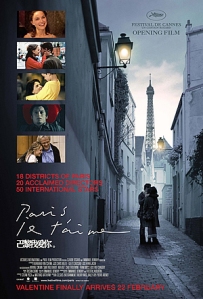 Cast: Juliette Binoche, Steve Buscemi, Natalie Portman, Nick Nolte, Bob Hoskins, Miranda Richardson, Rufus Sewell, Emily Mortimer, Willem Dafoe, Gena Rowlands
…
A love letter to the city of love, this film offers an amalgam of love stories from twenty different filmmakers. Its success sets a bunch of copycats (New York, I Love You; Valentine’s Day, etc.), but the concept alone doesn’t make a great movie. Paris, je t’aime still sets the bar high in creating a cohesive piece out of a myriad of unique and sometimes bizarre short stories. I enjoy most of the short stories, but if I have to pick a favorite, I love the Quartier Latin segment with Gena Rowlands and Ben Gazarra, directed by Gerard Depardieu. It tells the story of a married couple on their final night together as they’re about to sign their divorce papers, and they share a bittersweet moment as they reflect back on their relationship.
…
…
2. The Lord of the Rings trilogy (2001-2003)
Cast: Cate Blanchett, Viggo Mortensen, Ian McKellen, Liv Tyler, Elijah Woods, Sean Bean, Sean Astin, Dominic Monaghan, Billy Boyd, Bernard Hill, John Rhys-Davies, Orlando Bloom, Hugo Weaving, Karl Urban, Miranda Otto, and Christopher Lee.

The cast wasn’t what drew me into this masterpiece epic, in fact, because a lot of them were relatively unknown at the time, I see them as the characters they’re playing, not actors playing a role. And that is the beauty of Peter Jackson’s casting. I can’t imagine anybody else playing the roles of Aragorn, Frodo, Gandalf, etc. other than the actors in this movie. Each actor seems tailor-made for the role they’re playing that it’s such a seamless experience. It’s amazing the kind of unity a movie of this scale can have, perhaps it helps that the cast members have become a ‘family’ after nearly a decade of filming together.

A mostly-British cast always appeals to me, so when I saw the poster for this movie I was hooked! Fortunately, the Robert Altman lives up to amazing cast. Set in the 1930’s, the story takes place in an old fashioned English country house where a family has invited many of their friends up for a weekend shooting party. It’s less about the main premise of murder mystery, but more about the relationship of the characters. What’s going on with the house staff and valets below the stairs are just as dynamic and engrossing as the elite socialites. So even though the pace is slow, the well-written characters and witty dialog keep it entertaining. Andrew at Encore Entertainment wisely regards this as one of his best movie cast in his meme. The casting is indeed flawless!
…

I just saw this one again recently and I must say the casting is just darling for this movie, even if the movie as a whole isn’t exactly a masterpiece. Again, largely British actors make up the cast of eight very different couples dealing with their own love issues that are loosely interwoven with each other. The Christmas theme in London makes it sound like a holiday movie, but the themes of unrequited love, infidelity, second chances, etc. resonate all throughout the year. It’s perhaps one of Hugh Grant’s most charming roles, though my favorite characters are definitely Emma Thompson and Alan Rickman as a couple dealing with temptation and infidelity. When I saw this with my girlfriends, we’re all swooning over the geeky-but-drop-dead-gorgeous Rodrigo Santoro as the object of Laura Linney’s affection. But fans of Mr. Darcy would surely fanning themselves seeing Colin Firth as the lonely widower finding love again after being cheated on. Bill Nighy also provides an amusing comic relief as the outrageous aging rocker.
…
5. CRASH (2004) 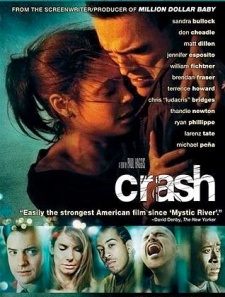 Cast: Matt Dillon, Terrence Howard, Sandra Bullock, Brendan Fraser, Don Cheadle, Thandie Newton, Ryan Philippe, Jennifer Esposito
….
This movie won several Best Ensemble Cast awards, and rightly so. They aren’t all big names like in those Ocean’s movies, but the key is finding the right actor for the role and trust them enough to interpret the characters. Paul Haggis did that very well and the result is a fascinating interwoven story that takes place in the course of just 2 days in Los Angeles. Obviously 112 minutes is such a short time frame to tell the story, and it sort of leaves the audience wanting for more. But it’s enough for us to grasp the concept/moral of the story Haggis is trying to say, and the compelling characters are so memorable that their stories linger long after the film ends.