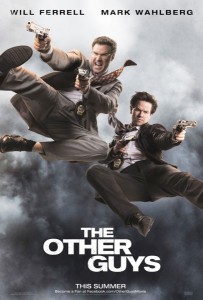 It’s a super hot Saturday afternoon and all I wanted to do was cool off in a movie theater and watch a Summer popcorn flick! I saw the trailer when I posted it on the Mark Wahlberg’s spotlight post and I found it pretty funny. Well, I’m happy to report that the movie lived up to it and its surprisingly fresh rating on rotten tomatoes.

The Other Guys as it’s aptly called, is a reluctant buddy cop comedy of two guys who can’t be more different from each other. For as long as these two have been on the force, detectives Allen Gamble (Will Ferrell) and Terry Hoitz (Mark Wahlberg) have always worshiped the best and most famous cops, known for their relentless ways to capture the bad guys, even if it cost the city $12 million in property damage involving a misdemeanor drug offense. The bad ass cops, played with glee by Samuel L. Jackson and Dwayne ‘The

Rock’ Johnson set up the hilarious opening sequence, full-throttle action and packed with ridiculous, logic-defying action sequences that’s fun to watch. But when their enormous ego and lack of common sense got the best of them, Hoitz got antsy to jump at the chance to fill the giant shoes that the two ‘city heroes’ left. That is when he’s able to persuade the happy-go-lucky, content-to-work-the-desk-job partner to join him. Wahlberg’s character was once a rising star whose colossal blunder he once made at the World Series for which made him the laughing stock of the whole precinct (and the entire city) and chained him to his desk job.

I’m not exactly a Will Ferrell fan, so I had no idea writer/director Adam McKay had worked with him several times previously: Anchorman, Talladega Nights, and Step Brothers. I can’t say if this is their best collaboration yet as I haven’t seen all

of them, but I’d think it’s right up there. Ferrell is best when he’s playing it straight, such as in Stranger than Fiction, which I adore and wish he does more roles like this. Here, his deadpan delivery and mild-mannered persona was perfect and perfectly funny! He offered such a contrast to the macho, short-tempered Wahlberg that their loud banter delivered the biggest laughs. It’s amazing how the two could keep a straight face during the lion and tuna repartee, I wonder how many takes that took but it was destined to be a classic!

I’ve always liked Wahlberg even if his movies are hit and miss. He is hilarious here whilst still manage to deliver what we expect a Mark Wahlberg movie, plenty of bombastic action! He isn’t a natural comedian, but the script brings the best of his comic timing. That ballet dancing scene is a hoot, as well as when he was blatantly ogling

Ferrell’s buxom wife Eva Mendes. The supporting performances aren’t bad, either. The always watchable Michael Keaton was terrific as the NYPD Captain, as did Steve Coogan adding his bursts of British sarcasm as the remorseless Bernie Madoff-like tycoon. Mendes’ chest did most of the acting again here, but that was really all that was requested of her.

I laughed from start to finish, and though I came in with pretty high expectation, I was still surprised by how much I enjoyed it! If I could nitpick however, the scenes between Ferrell and Eva where she sent her mother to talk to him was drawn out far too long. It’s just exasperating and pointless. I think the Eva scenes were funniest whenever Wahlberg’s around drooling over her. The timely plot involving Ponzi-scheme corporate corruption is a serious one, as the end credits made it out to be, but served with tongue firmly in cheek.

As this movie de-throned Inception from box office top spot this week, I’m sure I’m not the only one who saw this. Well, what did you think?

15 thoughts on “FlixChatter Review: The Other Guys”