This edition’s of Everyone’s a Critic‘s series happen to be movies that exceeds the reviewers’ expectation. In fact, Mike was practically baffled why Remember Me had gotten such terrible reviews – which at 28% is exactly the same Tomatometer as Twilight Saga: New Moon. He thought that this indie drama definitely has much more depth than that vapid vampire flick and shows that R-Patz actually has acting chops. I have not seen any of these movies, but I do plan on seeing them once they arrive on dvd. Special thanks to Corinne, Mike and Alan for their kind contribution!

Alice in Wonderland
– by Corinne Olson 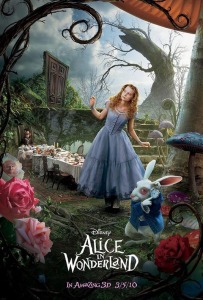 A few friends and I were all geek-ed about seeing Shutter Island. So we all met for lunch and thought we had plenty of time to get to the theater for the 2:00 show. But when we got there at 1:55, we found that Shutter Island had already started at 1:30. So after 5 minutes of arguing about what we should do, we all decided to go to the 3D version of Alice in Wonderland which was starting at 2:00.

I love Tim Burton movies and of course I love Johnny, but for some reason I had low expectations for this movie since I heard it had a cool reception in England. We’re already a little late going into the theater so we were stuck sitting in the front and off to the side. I hadn’t sat that close to a movie screen for 20 years.

Then the trailers started and we put on our 3D glasses. Then the movie started and after a funny beginning where Alice (Mia Wasikowska) seems more interested in chasing a rabbit down a hole than accept a proposal of marriage, the movie turns into this strange but beautiful alien world of strange creatures, plants, and disproportionately figured people. Alice is thrown into a world where  all these creatures in “Underland” are terrified of the dreaded “Red Queen” (Helena Bonham Carter), who Screems “OFF WITH THEIR HEAD!!!” to anyone that disagrees with her. She is my favorite (human) character in the movie.

Yes, Johnny Depp is really good as the Mad Hatter but Helena is a scream with her over-sized head and her super-diva Kate Gosselin-like attitude. She really pules that off. Then there’s my favorite digital character, the “Cheshire the cat”. This creature pops in and out throughout the movie with all the creepiness you’ve come to expect in a Burton movie. The 3D effect works especially well with the cat as it looks like you going to be nabbed out of your seat and eaten alive. I can’t believe I’m saying this, but I actually loved this movie for the 3D effects more than Avatar. I’m not sure if it’s from sitting closer or what, but I felt like things were coming out at me more than with the Avatar 3D effects. In fact, I would recommend sitting closer then you normally would in a 3D movie. It seemed to enhance my experience anyway.

Remember Me
– by Mike Beery

I was dragged to this one my my significant other. Now I’m a dude, so Robert Pattinson doesn’t exactly do it for me, however, my lady was interested so what was I to do? We both knew the reviews were pretty bad so perhaps that put us in a general mind-set not to expect much. It was from there that I grew more and more engaged as the movie dug deeper into the storyline.

Pattinson plays Tyler, a rebellious young man in New York City, who has a strained relationship with his father played quite believably by Pierce Brosnan. Tyler doesn”t think anyone can possibly understand what he is going through until the day he meets Ally played by Emilie de Ravin. Love was the last thing on his mind, but as her spirit unexpectedly heals and inspires him, he begins to fall for her. This is about as happy as it gets.

A series of rather sad circumstance unfold one after another. All is well with regards to the writing and acting, however, it’s not happy stuff. Perhaps it’s here where most of the reviewers were lost with this film. I’m not one to shy away from slightly depressing story lines, as that’s often how life is, as long as the portrayal is well done. This film does explore Tyler’s life in a respectful manner, as sad as it is. Remember Me isn’t the typical “tear jerker” love story at all. It’s a love story, it’s sad, but the two aren’t related. It’s that disconnect that adds to the movies “unlikeability”. Because it’s really about a young man that just can’t get past several tragedies in his life, and then, in the end, it’s too late for him to have a chance to do so. Adding to the ultimate sadness of this film.

Personally I really enjoyed this one and would recommend it. It’s engaging and memorable – lingering with you after you leave the theater.

The Invention of Lying
– by Alan Markham 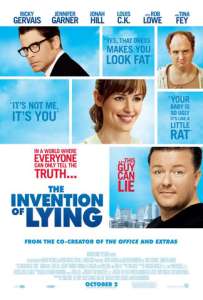 I have to admit going into this movie I was more than skeptical (given the weak title), but Gervais’s sharp wit and humor quickly turned me around. Co-written and co-directed by Ricky Gervais and Mathew Robinson, this romantic comedy does a good job of making the viewer think while also making them laugh.

In this movie, Gervais plays the character of a failing screenwriter who exists in a world where no one tells a lie. Early on in the movie though, Gervais soon discovers [the idea of] lying, and this begins to dramatically change/improve the world in which he lives. Part of this world involves Jennifer Garner, whom Gervais meets on a blind date, and Rob Lowe, a competitive coworker that Gervais has a hard time measuring up to.

I believe what makes this movie so entertaining is the fact that it makes you think about lying and how much lying really takes place on a daily basis… and how that really isn’t such a bad thing. During the movie I found myself wincing several times as characters delivered brutally honest lines to one another. The saying “The truth hurts” was never quite so apparent.

Entertaining movie for the most part… go see it!