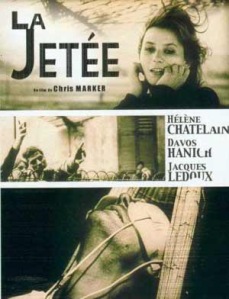 Lately, I’ve been preaching to RTM the benefits of Netflix streaming. Recently acquiring a Blu Ray/Netflix player (for cheap), I’ve spent many a night since checking out Netflix’s Watch Instantly library. While the typical duds are to be found, there were some surprisingly good to great movies on the catalog as well as some must-see and under the radar TV shows. I was mostly impressed by the abundance of classic/foreign films from the Criterion Collection. Just last night I re-watched one of the most unique science fiction films ever made: La Jetée.

Directed by French writer, photographer and multimedia artist Chris Marker, La Jetée (The Jetty or The Pier) is an experimental science fiction film told solely thru black and white still-images (with one exception) with no dialogue, just narration (dubbed in English) and music. The story is set in Paris – World War III has just decimated the world. People are forced to live underground from the fallout while food and the energy supply are close to non-existent. Scientists have begun work on time travel as a way to connect with the future and the past to obtain technology and supplies to save the present.

The main character, a prisoner, is chosen as a test subject to travel through time mainly because of his strength of memory and mind. Other subjects have failed the tests and have come back brain damaged or deranged, unable to cope with the physical and mental stresses of time travel. While traveling through the past, he meets and falls in love with a woman from his childhood. While his trips last days and weeks to months in the past, they are mere minutes in the present.

Eventually, the scientists deem him fit to send to the future where he meets an advanced culture who provide a device for him to save the present. At this point, with the test successful, his jailers plan to terminate him for they now have no use for him. The people from the future offer him a place with them to escape his killers but he opts instead to return to his childhood timeframe where a bleak but vivid memory haunts him as he tries to connect with the woman from his past…

The film resonates from a child’s point of view, perhaps because of its use of still montage as if you were turning the pages of a picture book. In fact, a book form of the film exists but is reportedly out of print. The photography is meticulous and expressionistic – noir-ish in its depiction of shadows and darkness. The only source of light, is an interrogation light bulb. The eerie stock music comes from British composer Trevor Duncan’s library work.

Within its 28 min. running period, what seems like an epic idea takes powerful form and shape in still photography. Uncompromising in its brevity and as a non-motion film, La Jetée is surprisingly accessible – so strong was its design and concepts that it inspired the Terry Gilliam film 12 Monkeys (with Bruce Willis and Brad Pitt), widely considered a full-length and excellent treatment of the short film. Highly recommended.