Happy Thursday all! Today I bring you two mini reviews that my friend Haley and I saw at an advanced screening this week.

Jeff, Who Lives At Home

Let me preface by saying I’m no writer, in fact a sheer sense of panic set in when Ruth asked me to write a review for her blog. I’m also no film connoisseur, but I am a visual person and movies are stories in pictures, I love that. Also, someone once told me that life begins when you step outside your comfort zone, so here goes…

So last night, I went with a group of 5 to a screening of Jeff, Who Lives at Home at the Lagoon Cinema in Uptown, Minneapolis. I must say, it was a far cry from Steve McQueen’s Shame I saw a couple of weeks prior that left me feeling uncomfortable, dirty and a overwhelmingly unsettled. But this isn’t about Shame…I still don’t know how I feel about that one. 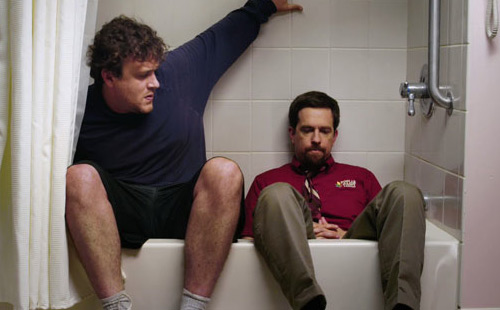 The consensus for Jeff, Who Lives at Home was determined unanimously over post-movie drinks to be “Almost great”. Although it all left us with warm fuzzies and wondering what signs in our lives we may have been ignoring, it certainly wasn’t what we had expected. So many movies these days market themselves as comedies, cause everyone likes to laugh and feel good, but this was a different approach and may very well have been the best way to get people into the theater with a cast of comedians. It was funny, don’t get me wrong, and there was probably even one too many jokes about the unusually large size of Jason Segel, but definitely more of a drama than a comedy.

One of my friends proclaimed “Well, I liked it and I usually hate most movies”, so even with the toughest critics it seemed to hit some sort of chord. Despite not being great and not quite what we were expecting it was good. And as much as the yogi in me wants to trust in everything and have faith in the universe that eventually our destiny will be revealed I also sympathize with the skeptics and realists in the world that have been burned too many times by trusting in their optimism. 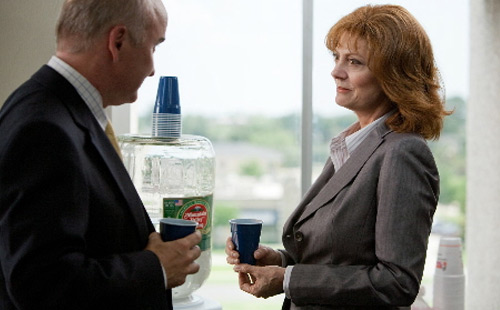 So if you are looking to be uplifted, laugh a little and almost shed a tear at the end, then this movie is for you. If you ever find yourself wondering if that little seemingly insignificant thing that happened to you today meant something more, than this movie is for you. If you have ever found yourself searching for meaning in life and know you were meant for great things that just haven’t revealed themselves yet, then this is for you. If you are looking for a naked Jason Segel and toothless Ed Helms then you may be somewhat disappointed. But for all the dreamers and optimists (or wannabes) in search of inspiration and happiness we so desperately need in our lives, this is a flick that shouldn’t be missed. Not to mention, I’ve always secretly wished Susan Sarandon was my Mom.

Salmon Fishing in the Yemen

This movie is one of my most anticipated films I listed on this post, so when I got advanced screening tickets from my pal Ted, I was very excited. Thankfully it did not disappoint!

The one thing that grabbed me right away is the bizarre story, based on a novel of the same name by Paul Torday. I mean Salmon fishing in Yemen?? I mean how could the species that thrive in cold water survive in the hot climate of the Middle East??

Well, the protagonist Fred Jones (McGregor), a fisheries expert for the British government, ponders the exact same thing when he receives this peculiar request. His first meeting with a rep for a wealthy sheik (Blunt) at her office is quite a hoot to watch, especially the scene of him illustrating the impossibility of this project and making up some incredibly high amount of money (50 million Pounds!) in attempt to dissuade the sheik. But obviously money is no object and the sheik is willing to do whatever it takes to make this happen.

The sheik (Waked) mentions the notion of faith frequently to the atheistic Jones, challenging him that there’s more to life than ‘facts and figures.’ It’s not so much faith in religious terms so much as a conviction and believing that something could happen against all odds. The Egyptian-born Waked is so darn charismatic and charming, perfectly cast as a kind and wise Arab royalty who actually has a purpose for this seemingly preposterous project and not simply to indulge on his salmon fishing hobby.

This film is quite tricky to categorize, I mean it’s sold as a rom-com but there are elements of environmentalism, foreign relations and even terrorism, though not in a way you’d expect. In fact, it’s a rare film where a wealthy Arab is portrayed in a positive light and breaks the stereotype that not all of them want to blow up the West.

The casting is definitely a strong point here. McGregor and Blunt have a sweet chemistry together, and their slow-burn romance is wonderful to watch. Blunt has a more emotional performance here, which works pretty well against the more deadpan McGregor. I definitely enjoy seeing Scott Thomas in a comedic role as an over-zealous Britain Press Secretary. She’s so sarcastic it’s downright cruel, bossing everyone around including her own boss the Prime Minister. The iPhone chat between the two is pretty funny, but her reaction seeing the Arab guards dressed in Scottish kilts at the sheik’s castle prompted the most laughter, ‘Oooh, happy birthday Patricia!’

Aside from the few surprising twists and the quirky premise, this movie doesn’t really break new grounds. A lot of the scenes are quite predictable, but Swedish director Lasse Hallström’s direction made for an enjoyable and heart-warming movie. There are also gorgeous scenery of the Scottish highlands (and the sheik’s sprawling estate) and also Morocco which subs for Yemen.

So yeah, Salmon Fishing in Yemen is a fun catch (pardon the pun). It probably won’t be as fondly remembered as Chocolat, but I don’t even mind renting this again one day on DVD.

Have you seen any of these? If not, do either of them appeal to you?