When most people hear the name Tolkien, they might think of the author of The Hobbit and The Lord of the Rings, (both of which were later turned into very successful film series by Peter Jackson, earning numerous accolades and awards) or they might think of English professor J. R. R. Tolkien (Nicholas Hoult), a poet, philologist, and academic who grew up relatively poor, never knew his father and lost his mother at a very young age. He was looked after by Father Francis Morgan, a Roman Catholic priest and former protege of Cardinal John Henry Newman, who served as Tolkien’s guardian and father figure. He attended King Edward’s School and met three of his best friends there. They formed a semi-secret society they called the T.C.B.S. The initials stood for Tea Club and Barrovian Society, alluding to their fondness for drinking tea in Barrow’s Stores near the school and, secretly, in the school library. The film Tolkien is much more about the young Tolkien, having meetings with his T.C.B.S. friends and then having to fight in World War I, and losing most of his close acquaintances as a result.

The teenager Tolkien (Harry Gilby) was at first a shy kid at King Edward’s School in Birmingham, England. Having moved there from Bloemfontein, South Africa where the family was living prior to Tolkien’s father’s death, his mother Mabel (Laura Donnelly) and brother Hilary Tolkien (played in youth by Guillermo Bedward and as an adult by James MacCallum) were new to Birmingham and didn’t have the means to live a comfortable live but were provided assistance by the Roman Catholic church. After Mabel’s death, Father Francis Morgan (Colm Meaney) took on the responsibility of guardianship of J. R. R. Tolkien, and advised him even during his years at Exeter College, Oxford. At the age of 16, Tolkien met Edith Mary Bratt (Lily Collins), who was three years his senior, when he and his brother Hilary moved into the boarding house where she lived in Duchess Road, Edgbaston. Tolkien falls in love with Edith, but is soon off to fight in World War I, leaving Edith for the time being.

While Tolkien is off fighting in the battles of World War I, he experiences first had the horrors of war, the death and destruction are just beneath his feet. He is shown throughout the film in the battle trenches and on the battle fields, fighting his own battles with trench fever. The scenes of battle, fire and death are what some believe gave him the inspiration for Mordor, the dark place where the arch-villain Sauron lives in the fictional world of Middle-earth, as told in the books of The Lord of the Rings. Tolkien is taken back to England and spends time at the hospital recovering and being back with Edith, but he also looses his close friends Geoffrey Bache Smith (Anthony Boyle) and Robert Q. Gilson (Patrick Gibson). His other friend and fellow T.C.B.S. member Christopher Wiseman (Tom Glynn-Carney) also comes back from war, but has many mental scars and never fully recovers from his wounds.

In the third act of the film, we see that Tolkien has married Edith and is starting to embrace fatherhood. He also meets with Geoffrey Bache Smith’s mother (Genevieve O’Reilly) and convinces her to publish some of Geoffrey’s poetry as a token to his memory. Part of Tolkien’s best memories before the war were spending time with his friends in the T.C.B.S. and forming what he later coined as the term “a fellowship” of friends. This is also the basis for the name of Tolkien’s first of three volumes in The Lord of the Rings: The Fellowship of the Ring.

Most casual fans of Tolkien, The Hobbit and The Lord of the Rings, might be a little disappointed in the film because it doesn’t have any of the fairytale or imaginative qualities that the fictional volumes that Tolkien wrote have. What the film does have are two strong performances by two young but compelling actors; Nicholas Hoult and Lily Collins. Their chemistry does not feel like its forced or out of place, and both help one another out by being interesting when sometimes the dialogue given to them is less so. I also especially like the moments when the young actors of Tolkien’s schoolboy life are on screen, headed by Harry Gilby, they form the Tea Club with fellow actors Adam Bregman, Albie Marber and Ty Tennant. These kids seem far more sophisticated and scholarly than normal kids, drinking tea at Barrow’s Stores and dreaming of worlds beyond their own. 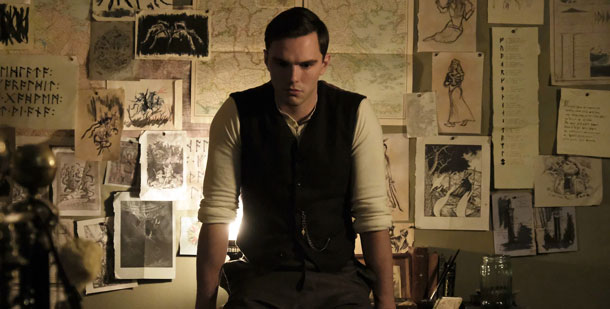 Overall, this rather unimaginative film has a few shining moments, headlined by Hoult and Collins onscreen together. Strong followers of The Lord of the Rings and The Hobbit might find deeper meaning in Tolkien’s life, but otherwise most audience members will be left empty-handed in understanding what really went on in Tolkien’s mind and how he was able to write such epic high fantasy novels. Maybe, just maybe, that part is up to us and in our imagination.

Have you seen TOLKIEN? Well, what did you think?

TOLKIEN From Fox Searchlight Pictures, Premieres as a One-Night LIVE Cinema Event on May 7 ahead of ‘Tolkien’ nationwide release on May 10.

Enter for your chance to win a pair of tickets to TOLKIEN: Live from The Montclair Film Festival with Stephen Colbert – an extraordinary event where you will be among the first to see the new feature film with an exclusive live simulcast Q&A with stars Nicholas Hoult, Lily Collins and director Dome Karukoski.

The screening event will take place on Tuesday, May 7 at 6:30pm at Emagine Willow Creek, Plymouth, MN. Thanks to Allied Global Marketing, we have a total of 10 tickets to give away. So if you would like to win a pair of tickets to the screening, leave a comment on this blog post with your email address and tell us why you want to see TOLKIEN. The first five eligible people will be selected as winners.

*Anyone can enter the giveaway, but please be sure that you can actually attend the event on May 7th. Tickets will be held at Emagine Willow Creek Theatre, winners must arrive no later than 6:15PM to claim their tickets. 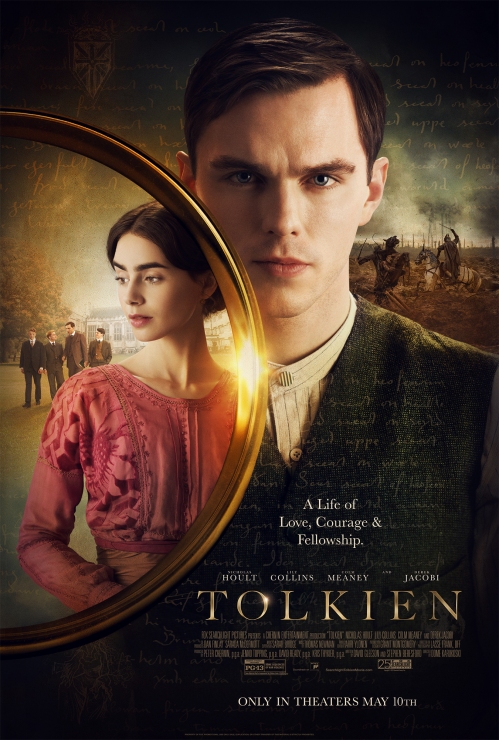 “Tolkien” explores the formative years of the renowned author’s life as he finds friendship, courage and inspiration among a fellow group of writers and artists at school. Their brotherhood strengthens as they grow up and weather love and loss together, including Tolkien’s tumultuous courtship of his beloved Edith Bratt, until the outbreak of the First World War which threatens to tear their fellowship apart. All of these experiences would later inspire Tolkien to write his famous Middle-earth novels.

Directed by Dome Karukoski (Tom Of Finland), TOLKIEN is written by David Gleeson (Cowboys & Angels) and Stephen Beresford (Pride), and stars Nicholas Hoult (The Favourite) as J.R.R. Tolkien with Lily Collins (Okja) as his future wife and muse Edith.