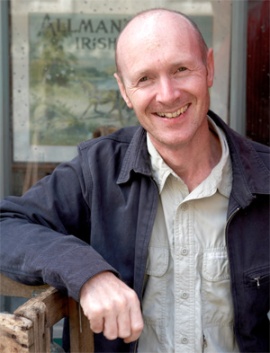 I was fortunate enough to get a sit down interview with Mr. Laverty the afternoon before the film premiere. Bummer that I didn’t get a chance to take a picture of Paul, so the photo to the right I found from Google.

I was planning on having the entire taping of the interview here, alas I forgot to turn my phone on airplane mode so when my friend called me two minutes into the interview and I didn’t realize that it stopped the recording until five minutes later, so I lost a great deal of our conversation where I asked Mr. Laverty about working with Ken Loach and with the actors in The Angels’ Share, so I’ll try my best to write down his answer based on memory, so a lot of the first few answers here is paraphrasing [note to self: get it in writing in case technology snafu happens!]. But the last three questions were on tape, so you can listen to his answers below.

Q: This is your 12th collaboration with Mr. Ken Loach and together you’ve won numerous awards for your work. What’s the secret of such a successful collaboration?

A: Ah yes, well ehm, it’s hard to be objective about it, hard to put my finger on it exactly, well I think the big thing is that we believe the same things, we care about the same things and want to see the same things being explored cinematicaly. Another thing is, it’s fun working with Ken, obviously. But he’s also a radical man, he has a strong opinion about things so it’s could be a challenge, he challenges me sometimes when we work together. But he’s also a very funny man, which makes it enjoyable to work with.

Q: I like stories about second chances and how a small gesture of kindness can turn someone’s life around. The character of Harry, played brilliantly by John Henswaw, is such a wonderful, inspiring character, is he based on anyone you know?

A: Glad you mentioned him. John Henshaw is such a wonderful actor and he played his role beautifully. I don’t think [Harry] was based on a single person, but more of a compilation of several people I knew who devoted their lives to rehabilitating the kids who are cast out from society, who can’t get out of their life situation even if they want to because nobody wants to take a chance on them, nobody’s willing to give them a job. That’s why I wanted to tell a story that perhaps would illustrate that part of society, that part of life, and maybe that’d get people to see how tough it is.

Q: The characters in this film are portrayed in such convincing ways by the actors. How did you find them, as I learned that most of the actors didn’t have any acting experience?

A: Yes, the lead Paul Brannigan who played Robbie has never acted before this. His real life story is actually very similar to Robbie, he’s also been to prison. But he was more than up for it. He obviously identified with his character and what he went through. There’s a lot of improvisation and as filming progressed, his confidence [as an actor] just grew and grew. Plus he’s not afraid to take a chance.

In relation to Laverty’s answer, this is what Ken Loach said about working with Brannigan, per The Guardian:

Says Loach: “He had real emotional truth. He knew this part implicitly. He’s also very astute. Some young actors have talent but you can’t really read them. With Paul, you can, and that’s quite unusual. He’s very centred and focused and economical.”

Q: The dialog in this movie is just wonderful. There’s a profound moment where Robbie’s wife said to him in the hospital as they’re holding their newborn baby, “You just get one shot of being a wee baby, Robbie. Just one shot… You know what that means don’t you?” 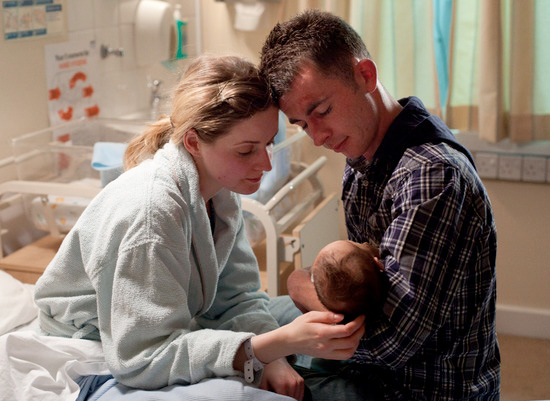 “… I think it’s about trying to see the world from the point of view of that character… and that’s always the great challenge to do that well and not to turn it into a stereotype.”

Q: My friend Mark who lives in Glasgow is a big fan of yours and he’s wondering whether you’re a Celtics or Rangers fan?

A: I’m a Celtics fan, you have to tell him… all the film fans are Celtics fans… as for Ranger fans, I don’t think they see films. Now don’t put that it in print, ahah.

Q: Now, Mark also asked me to pass this question to you… it’s about the situation in Glasgow. He said that the city doesn’t entirely function on sport [football] but its more to do with the religious divide that comes with the sport. It’s hard to describe but it permeates through the city and plays a big part of the cultural divide. It seems like it’s a topic that hasn’t been explored in films hardly at all.

“The ugliest part of Glasgow is the sectarian divide… you know, which is a great shame. It’s a great curse to the city. I think your friend is right. I think there could be a great story told about it…”

Mr. Laverty then said that Mark should write that story. He asked me to say hello to him, so Mark, perhaps one day you would collaborate with Mr. Laverty and Ken Loach on this Scottish football drama! 😉

Q: Why Eric Cantona, of all the other famous football players in Europe?

“Because Eric Cantona came to us and was very keen on collaborating with us. And he came with another idea, which you know, didn’t really work for us. But I was very fascinated by the figure of Eric Cantona, and Ken loves football as well.”

Mr. Laverty also recommended a football-themed film he did with Ken Loach, Italian director Ermanno Olmi and Iranian director Abbas Kiarostami called Tickets. I definitely will be renting that!

At the end of the interview, Mr. Laverty asked which publication I worked for, and when I told him I run a movie blog, he asked if I work on it full time and that he’s always fascinated by how these things came about. Then I replied that I have a full time job elsewhere and that I run my blog after work, and he said how it must take incredible energy.

He was very encouraging when I said I’d love to write for films one day, saying “Well you should do it, I mean if you have that much energy… you stop interviewing people like me and write your own script,”… to which I replied that I’m constantly inspired by creative people like him. But in any case, maybe one day I take up on his advice 😀

THANK YOU Mr. Laverty for your time and for being such so friendly and gracious. Now I really need to do a Ken Loach marathon, starting with Looking For Eric [read Mark’s review of it here]