With The Avengers kick-starting the Summer movie season, 2012 is shaping up to be the year of blockbusters. The year of ensemble cast blockbusters to be exact, as The Dark Knight Rises and The Hobbit are all vying to be amongst the ‘billion dollar club’ of the decade.

An ensemble cast: a cast in which the principal performers are assigned roughly equal amounts of importance and screen time in a dramatic production.

A couple of years ago I listed my top five ensemble cast films from the past decade. Now, it’s not as simple as just hiring a bunch of actors in one movie, as some dismal movies like Valentine’s Day or New Year’s Eve did. A good ensemble formula is when the assembled players actually work well together and elevate the story, instead of just getting ‘butts in seats’ for their name’s sake.

The ensemble cast films aren’t limited to just the mega blockbusters, however, Wes Anderson’s Moonrise Kingdom and Woody Allen’s To Rome with Love also boast a large troupe of actors for their films. There’s also the 80s action heroes ensemble that is Expendables 2, and comedy ensembles What to Expect When You’re Expecting and Movie 43 from the Farrelly Brothers which I talked about last March [it’s apparently has been pushed out ’til next January]. On a smaller scale, there are these two independent projects I’m highly enthusiastic about:

Ok, these three films represent three of my favorite ensemble cast from this year’s release (apart from The Avengers that is):

Norton, Willis and Murray… what a trio! The trailer looks like a hoot as well. This might be another Wes Anderson movie I like since The Royal Tennenbaums!
… 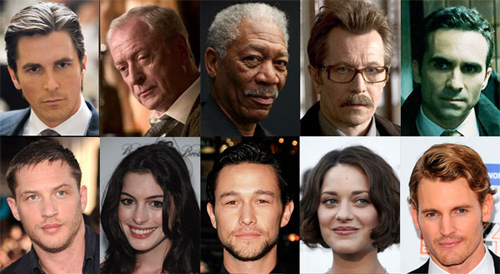 The Dark Knight‘s cast is already ace, but the additional cast (especially Hardy and Gordon-Levitt) just makes it even better!! I’ve never even heard of Josh Pence before (last photo on the 2nd row) but curious how he’d fare as young Ra’s Al Ghul.

Now, is it any wonder I actually dreamed about being on the set of this movie??! Again, I already LOVE the cast of the Lord of the Rings trilogy but Peter Jackson seems to have upped the ante even more as The Hobbit is chock full of my favorite UK/Aussie actors!! A lot of them are from UK TV shows so I wonder if PJ are a big fan of BBC? 😀 You already know this but I’m looking forward to seeing Richard Armitage as Thorin the most, but also Lee Pace as Thranduil the Elven King!
…

The Best Exotic Marigold Hotel – I LOVE the all-British cast, especially the two Dames: Judi Dench and Maggie Smith. But it’s also nice to see the likes of Tom Wilkinson and Bill Nighy amongst the cast as well.

Inspired by my pal Terrence’s Time to Vote Tuesday, I figure it’d be fun to have an interactive post for today 🙂

So which of these ensemble cast is your favorite? Please cast your vote below (you can pick 2) and do share why in the comments 🙂

In honor of St. Patrick’s Day, I thought I’d highlight an upcoming Irish film starring actors and this one has been on my radar for some time, thanks to my Cillimaniac friend Novia 🙂

This project is actor Brendan Gleeson’s passion project he’s been working for quite a long time. And according to my friend Stella’s @ Byrneholics, Ireland’s Cultural Ambassador Gabriel Byrne announced that Gleeson has secured funding for the movie, yay!

Mr. Byrne himself is to be a part of the most awesome Irish ensemble cast ever! I mean we’re talking the who’s who of Irish cinema (most of whom are in my Top 10 Irish Actors list :D):

Whew! This is one of those movies that I’d run to the theater just for the cast and of course the Irish scenery as it’s likely to be filmed there.

The premise itself sounds intriguing. Here’s the book description from Amazon:

A wildly comic send-up of Irish literature and culture, At Swim-Two-Birds is the story of a young, lazy, and frequently drunk Irish college student who lives with his curmudgeonly uncle in Dublin. When not in bed (where he seems to spend most of his time) or reading he is composing a mischief-filled novel about Dermot Trellis, a second-rate author whose characters ultimately rebel against him and seek vengeance. From drugging him as he sleeps to dropping the ceiling on his head, these figures of Irish myth make Trellis pay dearly for his bad writing. Hilariously funny and inventive, At Swim-Two-Birds has influenced generations of writers, opening up new possibilities for what can be done in fiction. It is a true masterpiece of Irish literature.

Gleeson told Collider whilst promoting The Guard last August that “It’s one of the funniest and most anarchic novels I’ve ever read… It’s a great book but it’s kind of unfilmable in the way that the book was unwriteable.” But he confirmed that he’s got the script and so it’s just a matter of time for this project to be underway.

So how close to filming is this project?

“Well, fingers crossed, we’re trying to stitch it in this year. All things are going well but we’re not quite there yet. We’re hoping to be there in the next month or two to where we put a start date on it,” Gleeson said (via Irish Central). According to BBC UK back in Summer 2011, they’ve secured the funds for the project, but there hasn’t been any news since 😦

Mr Gleeson himself has been quite prolific lately, starring in three films in 2011: The Guard, Albert Nobbs, and The Cup, Safe House & The Raven in 2012  and The Calvary in 2014.

Oh man, I sure hope this film gets off the ground soon! I absolutely can’t wait to hear more about this one and hopefully filming happens soon and all the cast above will be involved!

What do you think folks? Interested in this one?