It was another fun day at TCFF yesterday! Following the Women in Film panel, the fun continues with the rom-com Forev, Bahamian Son and Winter in The Blood.

I got a chance to meet up with Forev director Molly Green, which is as awesome as she is talented! It’s so great to meet with a young female filmmaker who’s on her way to making her mark in Hollywood. I really enjoyed her film, it’s funny, engaging and best of all, well-written and well-acted. That’s why I was intent on talking with her about how she got her start in making film and the filmmaking process of her debut.

What’s your film background? I heard that your early experience was in film casting?

Yeah I did work in casting. I started out when I first moved to L.A. with a casting director called Randi Hiller who had a contract with Marvel. So I spent about a year and a half working on THOR which was awesome as I got to hang out in a room with Kenneth Branagh all day. It was awesome because I got to see how he worked with actors, which as a director it’s one of the best experiences you could ever have. Since then Randi has become head of casting at Disney and has been an amazing mentor. So it’s been a great foundation as a director to see a master director and master actor work with other actors. So yeah, it made me feel confident about working with our actors as I knew how to talk to them.

So how did you come up with the film concept for FOREV?

My directing partner James Leffler and I thought about doing a feature film. And this is a time in our lives where we’re starting to get wedding invitations from our college friends, and you start to see marriages as less of an abstract but more of a concrete concept. People in our lives are actually getting married which was bizarre, so we had that idea floating around in our heads. Then Matt Mider and Noël Wells who play Pete and Sophie in our film came to us and asked if we’d do a comedy sketch. We told them no but we said we’d do a feature film if they’d be in it so they agreed to do it.  So that’s what happened.

When you thought of doing the film, I know it’s a rom-com genre, but did you want to want to add the ‘road movie’ element to it?

I don’t think we thought about making a road movie, I don’t think any of us did. But we know that we’d get more production value from the desert. So we knew that having that desert scenery and backdrop would be valuable for the movie so it’s just a matter of getting the characters there. So we didn’t really follow the the convention of a road movie but it just happens sort of naturally. Recently someone called it a screwball comedy, which is a good way to describe it. It’s a weird, modern take of screwball comedy aside from rom-com.

You mentioned a bit about the casting for Pete and Sophie but how about the rest?

Amanda Bauer who plays Pete’s sister Jess is actually a friend I knew from my casting days. She was in a film that played at SXSW called The Myth of the American Sleepover. She’s really young and really smart so we wrote her and hoping she’d do it and she thankfully said yes. As for the rest, most of them are my neighbors. I live in a building full of actors so the scenes of partying and at the bonfire, those are all my neighbors. And that’s pretty much like a typical Friday night, that bonfire scene. So that’s how it all came to be.

So what’s your favorite part of the FOREV’s shoot and filmmaking process?

To me, it was incredible to go out to the desert with a group of really close friends and make something we’re all be proud of. That’s just so super fun to y’know all thrive together. We’re in this road trip, we’d stay in a house together, working in this beautiful scenery, it was the most fun I’ve ever had. It’s been really nice to premiere with those people. We premiered in L.A. so it was nice to be able to stand up with everybody, it’s so nice.

What’s next for you? Also talk a bit about the distribution of FOREV.

James and I have been writing the whole time, we have like three different projects we’re working on. We don’t know which one will be the next one but hopefully we’d be in production on something very soon.
As for distribution, we haven’t signed the paper yet but I’m anticipating FOREV will be available on direct TV or VOD or Netflix by Spring. 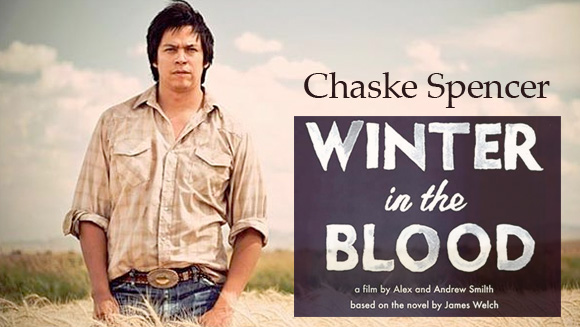 One of the major highlights of TCFF this year is Winter in the Blood starring Chaske Spencer who’s thus far best known as the alpha male werewolf Sam Uley in the Twilight series. Check out my fellow blogger Mitch Hansch’s interview with the actor. Here’s an excerpt from his conversation:

On how James Welch’s book gives him an insight into his character Virgil:

So the book was a great blueprint map to finding this character, but I don’t know how much I have in common with him.  I think I had to find correlation at some point with him but it was just very simple.  Alex and Andrew helped me out a lot by finding where I could substitute certain aspects of my life into Virgil’s life, but you know at the end of the day that it’s just acting.

On working with directors Andrew and Alex Smith

Well, I’m just speaking from my experience but they were very spot on.  I don’t know what happened between scenes because I really focused on my job but they were very helpful, very supportive, and I felt very safe with them, and also my performance was being guided in the safe hands of those two gentlemen.  They’re very intelligent, they know what they want.  They’re very specific on what they want and that helps us out as a actor when the director specifically knows how he wants the outcome to be.

Check out the rest of the interview over on Mitch’s blog!

Now, this dramatic feature has Minnesota connection as it’s based on the true events of its writer Reggie Henderson. It’s set in Minneapolis as well as The Bahamas. Check out my conversation with its director on how the project came to be.

1. How did project come about to you? Did you know Reggie Henderson before making this, if so please tell us how you first met him.

I know Reggie from the working with him in the music business. He produces music with Toki Wright and we met and a set of the music video we were shooting for Toki’s A Different Mirror. After the video wrapped we started talking about the project.

2. How long did it take you to make the film? Seems that the film was shot on location both in Minneapolis and The Bahamas?
From principal photography (the beginning of shooting) to final sound mix Bahamian Son has taken about 3 1/2 years. We shot roughly two weeks in MN and just over two weeks in Nassau, Bahamas.
3. The end of the trailer promises a dark and gripping scenario. Without revealing any spoilers, what would you say are the main themes of this film?
There are obvious themes in the film. Family, fatherhood, are a couple of the obvious ones, but to me, the film is also about the human experience. We go through our lives trying to figure out who we are and where we fit into this big life thing we are all experiencing. Bahamian Son is about one man’s story. Some of us can relate directly to his experience and others in the abstract, but the hope is that we all get more clues on this big show goes. It’s a bit cliche, but when you take a leap or a chance expecting one outcome, and you get another, it can be so much more rewarding because you are still further then when you started.

4. Reggie Henderson himself wrote the script, so tell us how it was like collaborating with him on this film.

Reggie and I went into this project as professional friends and came out brothers who LOVE to disagree. (Laughs) I mean that in the best way possible. Reggie is an amazingly creative mind and I learned a lot from him. At the end of the process I think we both learned from each other.
5. Now lastly, please tell us a bit about your filmmaking background. I read here that you worked on music videos, NBC’s The Biggest Loser and as part of the crew on the film Souvenirs. So what’s your biggest challenges as well as favorite experience of working on a feature film?
I think I benefit from all the different production jobs I’ve had, and have. I’ve done corporate video, commercial, music videos, reality shows, features and docs to name a few. While they are all in the production world, they have their own challenges that give you a new technique and insight into the craft. When you shoot 3,000 feet beneath the earth in a mine, travel with musicians across Europe, then come home and shoot an interview at the IDS with a big shot executive, you encounter a lot of personalities and styles of living. I love that part of the job.
…

Hope you enjoy these interviews! Thoughts on the films featured here?