I first became familiar with Céline Sciamma’s work from GIRLHOOD, which was one of my fave movies of 2015. Petite Maman is quite different in style and tone but it also has a cast of first-time actors. The opening shows an 8-year-old girl Nelly who’s saying good bye to a few elderly residents of what looks like a hospital (or perhaps nursing home). Nelly’s beloved grandmother has just passed away and her parents are taking her to her mom’s childhood home to clean it up.

One thing that strikes me about Sciamma’s direction is the sweet little details that are stirring and heartfelt. Like the moment in the car when Nelly feeds her mom snacks from the back seat as she’s driving. The conversation between her and her young mom is matter-of-fact but profound. Nelly laments that she didn’t get to say goodbye properly to her grandmother and that one can never know when someone is going die… that scene made me weep as I too didn’t get to say goodbye to my own grandma when she passed two decades ago.

As Nelly explores the woods nearby, she encounters a girl of her own age named Marion and they strike a friendship. It’s best not to know much about the premise and just let the film’s mystery unfold and surprise you. The fantastical elements is very much grounded in the reality of human emotions of love, grief and loss. Some of the scenes, such as Nelly’s birthday celebration, are quite surreal and meta once you realize just who Marion and her sickly mother really are. 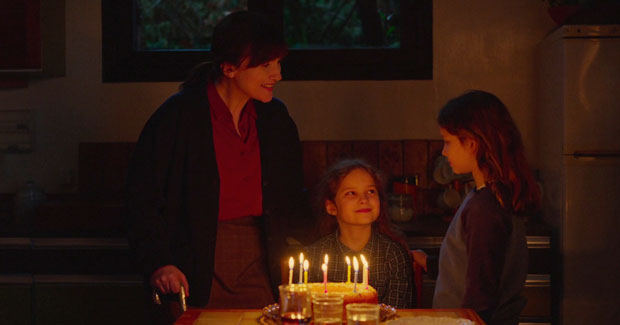 The casting of the two child actors are absolutely spot on. Joséphine Sanz is so adorable and mesmerizing in her first ever feature role. It’s amazing how natural she is on camera and there’s such an ease In her performance it’s as if she weren’t acting. Her identical twin Gabrielle Sanz plays Marion, and from the first moment they interact, you know this isn’t just an ordinary occurrence. They look so much alike that at first I thought it’s the same actress playing two roles. Just watching these two spend time together from playing games, making pancakes, role playing, etc. is absolutely delightful. They have such an infectious laughter that just lift up one’s moods.

Sometimes, the simplest films are the most moving and I find that’s the case with Petite Maman. Sciamma’s got such a keen insight into human relationships, told from a child’s perspective… such as when Nelly tells her dad that it’s not so much that he forget details his wife has told her, but it’s because he wasn’t listening. There is a nostalgic quality about it and I recognize the pen the girls are using are the exact same pen my mom used to have growing up in Jakarta that I haven’t seen in the US. I also love the graceful cinematography by Claire Mathon which complements the tone and atmosphere of the film so brilliantly.

I actually rewatched the movie twice back to back I enjoyed it so much. I wish I had seen Petite Maman sooner as it’d definitely end up in my Top 10 of the year. There’s such beauty in simplicity, as well as brevity… at just 72 minutes long, Sciamma created a spellbinding movie that packs an emotional punch.

Have you seen PETITE MAMAN? Well, what did you think?