I was on a flight recently and I was feeling tired after a pretty hectic vacation that I wanted to watch something to lift up my mood. In Here Today, Billy Crystal stars as the protagonist Charlie Burnz, a veteran comedy writer living in NYC. The film is inspired by a short story by one of the original Saturday Night Live’s writers Alan Zweibel who co-wrote the screenplay with Crystal, so it’s unsurprising that the popular sketch comedy show Charlie works at is pretty much modeled after SNL.

Every day Charlie walks from his brownstone Brooklyn apartment to the studio taping of the show, and we see him work alongside much younger writers. The interactions inside the writers’ room feels pretty authentic given the writers seem to have a grasp of the industry they’re depicting and it doesn’t feel like they’re satirizing the material.

There’s a certain routine that Charlie lives his day-to-day, in fact he takes the exact same route to work and he’d even say to himself where to turn at an intersection. At first I thought he’s just very particular, like someone with OCD where everything has to align just so in order for him to function properly, but later the real cause of this behavior is revealed. Charlie’s routine is about to be shaken up when she meets Emma Payge (Tiffany Haddish) who won a lunch with him at an auction. She quickly reveals it’s his ex who won it, as he happens to be an aspiring writer, but that she’s never heard of him, ouch!

Haddish has that matter-of-fact delivery and no-holds-barred attitude that can be annoying or amusing. I’m not that familiar with her work, but I find her funny and likable here. The food allergy scene is the kind of broad, predictable comedic trope, but somehow Haddish and Crystal manages to make it hilarious. Charlie helps her out with the hospital bills but days later, Emma turns up at his apartment days later to pay him back. I appreciate that the film avoids the ‘white savior’ trope or any kind of tiresome savior trope for that matter. 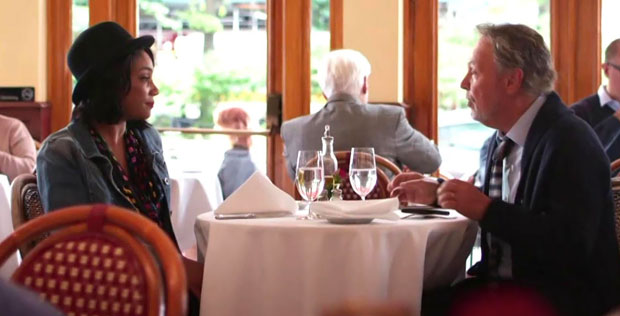 The film shows us just how accomplished Charlie is through Emma’s eyes when she gets inside his spacious apartment. It’s filled with awards, plaques, play posters, etc. from Charlie’s past work, but it also gives hints of his memory loss. Emma astutely picks up on that when she sees Charlie tapes names of his kids and other family members under various family photos. The film takes its time to reveal Charlie’s dementia, and the script injects some levity in the devastating conversation between Charlie and his doctor (Anna Deavere Smith). I also like the fact that the film takes time for Charlie to find out more about Emma, going to her band’s performance on a street concert where she gets a chance to get back at her cheating ex-boyfriend.

Before long, Emma becomes quite an integral part into Charlie’s life. He invites her to go to his granddaughter’s Bat mitzvah where she breathes life into the party with a rendition of Janis Joplin’s Piece of My Heart. No doubt Charlie’s son and daughter (played by Penn Badgley and Laura Benanti) are suspicious about Emma’s relationship with their dad. At first, it’s not entirely clear if their relationship is romantic or platonic, especially when they have a slow dance at Charlie’s balcony, serenaded by renowned violinist Itzhak Perlman no less (one of several famous cameos in this movie). But the script handles the did-they-or-didn’t-they romance question quite amusingly when Emma ends up in Charlie’s bed following a rainstorm.

Yes, there are certain formulaic elements that the film goes through, certain comical clichés are engineered for laughs. But thankfully the two leads are genuinely funny. I enjoy even the sillier bits when they visit the Madame Tussauds museum and take endless selfies. One of the most hilarious, which ironically is also the most devastating, moment is when Charlie has a breakdown during a LIVE taped episode. He goes on a tirade against a cast-member and engages the audience in the process. What’s thought of as a brilliantly-improvised performance ends up going viral, but soon the team and show runner finds out that Charlie’s been sick.

Comedy and tragedy often goes together, and so is the case with Charlie’s story. From the start, he’s always haunted by a painful memory which is peeled off slowly thanks to Emma’s persistence. I do feel the constant flashback of Charlie’s love life with his late wife Carrie (Louisa Krause) is too repetitive however. It has its touching moments, but ultimately the scenes between him and Emma tend to overpower his other relationships, including the one he has with Darrell (Andrew Durand), a young show writer he mentors.

Overall though, I enjoyed the movie despite its uneven tone that veers more towards melodrama in the end. Aside from Charlie himself, the rest of the characters are paper thin, even Haddish’s Emma feels like she only exists to drive Charlie’s narrative forward. That said, Crystal is a wonderful performer, and he + Haddish definitely make for a winning comedic pairing, so I’m glad I saw this one.

Have you seen HERE TODAY? Well, what did YOU think?