There is a lonesome vastness in the Australian countryside; flat landscapes, aged trees sporadically placed within view and oblique farmland ravaged by a drought. These are the opening scenes from Robert Connolly’s The Dry, effectively setting the tone for this brooding but highly entertaining whodunnit based on the book by Jane Harper.

Federal Agent Aaron Falk (Eric Bana) returns to his hometown of Kiewarra, a small farming town a few hours from Melbourne, after his boyhood best friend Luke dies with his family in a presumed murder suicide. Luke’s parents however, aren’t satisfied with the local inquest’s findings and requests Aaron to investigate them further. Reluctantly, he agrees and with the help of a local sergeant, starts looking into the circumstances of Luke’s death. Run-ins with the locals reveal Falk being somewhat of a pariah and that 20 plus years ago was at the center of one of the town’s darkest chapters. To say more would be denying you all the fun…

Robert Connolly’s direction is precise and compact. Shots and dialogue are as efficient as they come and effectively guide us through the labyrinth of this whodunnit. The film does not try to be too smart to mislead us outright but rather walks us through story. While looking for clues and clichés, The Dry avoids the latter and paves the path for us to follow whether it be dead-end, U-Turn or fork in the road.

The film has understated performances throughout. Bana is very good as usual and channels something between a much reserved John Robie (from Hitchcock’s To Catch A Thief) and Jake Gittes (Chinatown), less cynical but adequately scarred by personal trauma. Keir O’Donnell is fine as Sergeant Raco as are the other supporting players including Genevieve O’Reilly as childhood friend Gretchen.

Harry Cripps and Connolly’s screenplay is tight and not over the top like other films of the genre. The film’s tone remained consistent throughout but also managed to sprinkle in subtle lighthearted moments (especially the scenes with Raco). While following the tried and true double narrative style, it still managed to avoid the clichés that could’ve turned this very good film into a mediocre one.

Stefan Duscio’s non-flashy cinematography also helped propel the story forward by using the Australian setting as an essential character of the story. The drought-plagued landscape somehow manages to parallel our own pandemic-changed world with its sense of isolation. Regardless, The Dry is an atmospheric film without shouting itself out. 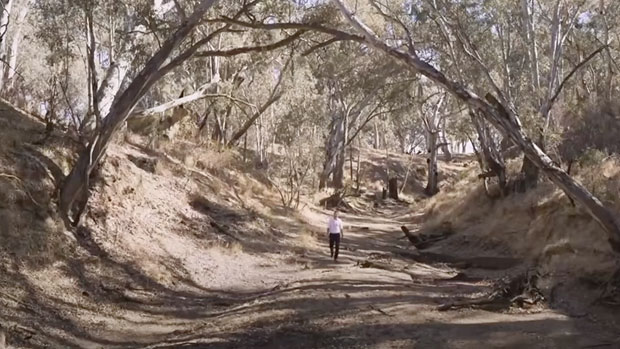 While maybe not quite a classic, The Dry is indeed a very good, taut thriller that deserves a good viewing or even a few… Good direction, a well-written script, great performances and excellent cinematography make The Dry interesting, entertaining and engrossing.

And it kept me guessing.

So did you see THE DRY? Let us know what you think!