Woo wee!! I was quite busy with work yesterday that I didn’t even realize it was Disney Investor Day yesterday. Or you might as well call it ‘Disney-take-all-my-money-Day’ given the drool-worthy Marvel Phase 4 trailers being released, as well as new revelations that got me jumping for joy!

If you missed it, there are a few videos posted on Youtube where Marvel Studios president Kevin Feige introduced all the slates coming in the next year or so:

Man, it’s gotta be good to be Kevin Feige… I mean, how many producers get to be involved with SO MANY films that people can’t wait to see. It’s amazing how Marvel managed to connect their feature film slate with their TV series offerings, as Feige mentioned as the ‘inter-connected-ness of all the stories’ within the universe. It just goes to show how well-managed the Marvel franchise is compared to its rival DC.

Anyhoo, if you’d rather just watch the individual trailers, here are a few I’m super excited about:

Out of ALL the Marvel series going to Disney+, LOKI is my most anticipated because I LOVE Tom Hiddleston‘s portrayal. He actually made me love the villain more than the hero (sorry Chris Hemsworth!)

Oh I love the changing font for the LOKI logo, it’s perfect for the god of mischief!

When I first heard of WandaVision series, I was kind of meh about it… that is until I saw the concept, setting it in 1950s as the unlikely couple are living the ideal suburban life in the town of Westview, trying to conceal their powers. Such a freakin’ brilliant concept!! Elizabeth Olsen and Paul Bettany look like they’re having a blast in the roles, and now I can’t wait to see this on January 15, 2021!

I’m really hoping this one would be good as I LOVE Anthony Mackie and Sebastian Stan. Captain America is my favorite Marvel trilogy and these are two extremely handsome + talented actors reprising their roles from the franchise, and this trailer looks fun and action-packed. Yet… somehow there’s something wanting, which makes me a bit worried that it won’t be as good as I expected, but hey, I hope they’d prove me wrong come March 19, 2021.

I wish there were a trailer for Shang–Chi and the Legend of the Ten Rings, the first Asian-led superhero movie, starring the Chinese-Canadian Simu Liu in the title role.

Speaking of representation, this is a series I haven’t heard about but am excited about!

A new series called Ms. Marvel, is apparently in the works! Newcomer Iman Vellani will star as Kamala Khan aka Ms. Marvel in the series, which is set to arrive on Disney+ in late 2021! The series will center on Kamala Khan — a 16-year-old Pakistani-American growing up in Jersey City. A great student, avid gamer, and voracious fan-fic scribe, Kamala has a special affinity for Super Heroes, particularly Captain Marvel. Check out the teaser below:

Well this is old news to some, but it’s still cool to see this brilliant casting news confirmed officially! As if we needed another reason to be excited about THOR: Love and Thunder, Christian Bale will be playing the villain, Gorr The God Butcher. Woo hoo!! I guess he’s taking a note from his former co-star & fellow Oscar-winner Cate Blanchett who seemed to have the time of her life playing Thor’s sister/villainess Hela, The Goddess of Death.

This video shows all the announcements for some highly-anticipated shows! I remember a month ago or so, while I was watching PERRY MASON which also stars Tatiana Maslany, there were talks that she’s going to play She Hulk, which she denied. But looks like it IS official that she will portray the character! Interesting to see Tim Roth will reprise his role in The Incredible Hulk as Abomination. 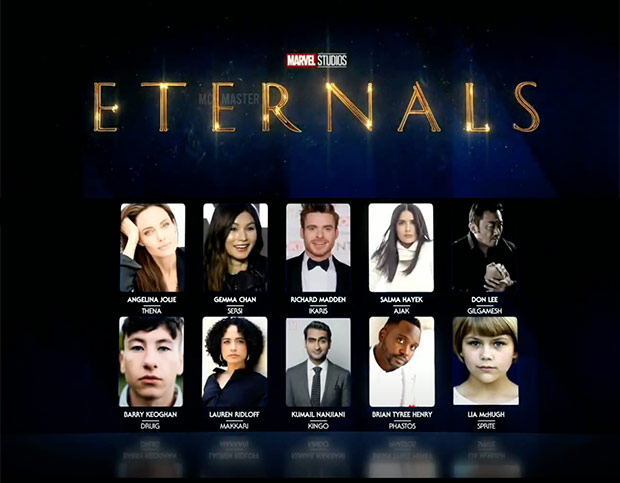 I wish they’d released at least a teaser for ETERNALS, which is what Feige said as ‘unexplored territories of the Marvel universe.’ The cast looks amazing!! But I’m equally excited for the director at the helm, Chloé Zhao.

Per IO9, it’s her Manga vision is partly what got her the director’s job. Per the IO9 article, Zhao is quoted as saying “I have such deep, strong, manga roots… I brought some of that into Eternals. And I look forward to pushing more of that marriage of East and West.” That marriage, Zhao thinks, could put Eternals on par—at least thematically—with the last big Marvel movie. “How much further and bigger can we go after Endgame? Because I’m not just making the film as a director. I’m making the film as a fan.”

Now, not every single announcement got me excited however, this one actually made me LOL-ed and cringe at the same time… ‘Guardians Of The Galaxy’ Holiday Special.

Even seeing this here makes me laugh. One of my favorite stories ever, which I have bugged @Kevfeige endlessly about over the years. I can’t believe we’re actually doing this. And, yes, I unironically loved the Star Wars Holiday Special as a kid. pic.twitter.com/JjymrARoV7

Wait, what?? Apparently James Gunn will also direct this Live-Action Holiday Special in 2022 Before Vol. 3 Arrives in 2023, and he obviously is excited about it. O-kaaay 😀

Well, that’s the scoop about Marvel Phase 5. Which series are you most excited to see?