Road rage can be a scary thing. From angry drivers dangerously tailgating or cutting off the targets of their fury to actually pulling weapons on them, you never know when someone is going to snap. That said, I don’t think anyone has seen the level of road rage one man brings to this latest thriller.

In Unhinged, struggling single mom Rachel (Caren Pistorius) angers a driver simply known as The Man (Russell Crowe) after she honks at him for sitting too long at green light. Unfortunately for her, this man has a hairpin temper, a terrifying violent streak, and a willingness to kill anyone in his way. 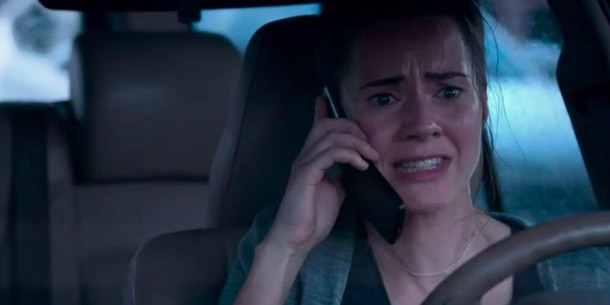 This is a solid thriller by director Derrick Borte. The tension is high throughout, and having an antagonist who isn’t afraid of getting caught or hurting people with multiple witnesses around makes the stakes feel much higher. There are some exciting car chases, although because so much of the movie takes place on the road, it starts blurring together after a while. There’s some clunky foreshadowing here and there, and the protagonist makes some unrealistically stupid decisions that even suspension of disbelief can’t get me past, but I think most people will watch this movie for the action, not the writing, so it’s mostly forgivable.

While the writing is nothing amazing, the acting from the two leads is excellent. Caren Pistorius is likable, relatable, and brings a good balance of vulnerable and badass. Russell Crowe as The Man proves what a chameleon of an actor he is, and not just appearance-wise; he’s a truly versatile performer, and this role showcases that. I’m bummed that Jimmi Simpson doesn’t get much screen time as Rachel’s best friend and divorce lawyer; I’ve enjoyed his other performances (I loved him in the Stephen King miniseries Rose Red) and was excited to see him as one of the top-billed actors, but I don’t think he has even five minutes of screen time. He does well with what he’s given, though.

While it’s not really my type of movie, Unhinged is enjoyable enough. It’s suspenseful, well-paced, and the acting is good. If you’re a fan of dramatic car chases, this one is worth a watch.

Have you seen UNHINGED? Well, what did you think?