The life of visionary inventor Nikola Tesla is certainly makes for an intriguing subject for the screen, both as narrative or documentary films. Even in a supporting role, the character of Tesla is always fascinating to watch. I remember distinctly in The Prestige, played by none other than David Bowie, and recently in The Current War, played by Nicholas Hoult. Well, this latest film with his namesake as the title (played by Ethan Hawke) places the eccentric futurist front and center, as it focuses his interactions with Thomas Edison and J.P. Morgan’s daughter Anne.

When I first saw the trailer, I thought, how cool to see a film that seems as inventive as the subject matter. Forgoing a conventional biopic, writer-director Michael Almereyda presented the narrative in deliberately off-the-wall style, with the use of backdrops to depict various locations and characters breaking the fourth wall. In fact, you’ll see characters using modern-day technology like laptops, mobile phones, etc. and talking to the audience directly while stating facts about Tesla and his inventions.

It opens with Tesla in roller skates with his friend Anne Morgan (captivating Eve Hewson), a character I wasn’t familiar with until it’s revealed later that she’s J.P. Morgan’s daughter, yep, the ultra-wealthy banker who was one of Tesla’s main investors. Hewson served as the film’s narrator (who also analyzes the inventor and his contributions to the modern world), as well Tesla’s love interest. Now, that latter part is less convincing than the first, not so much because of the actors’ fault however, somehow the inventive style just doesn’t have much room for romantic emotions. So let’s just say the romance between her and Tesla never quite ignite.

It’s a rather ambitious, even risky way of storytelling… which I find really cool and amusing in the beginning, but as the film went on, its novelty narrative starts to lose its charm. Some of the scenes play out in a deliberately surrealistic way, such as the scenes between Tesla and Thomas Edison (Kyle MacLachlan) shoving ice cream into each other’s faces. It’s quite obvious that such an incident didn’t happen, so I accept its inherent drollness and sheer ingenuity in the part of the filmmaker.

Jim Gaffigan as entrepreneur George Westinghouse is as much an inspired choice as Hawke himself as Tesla, but I quite like the scene between the two. It might be one of the rare emotional moments in the film. Frankly, the inventive narrative style just doesn’t seem to have room for much emotional resonance, which I think is a missed opportunity. Hawke is quite magnetic as a brooding, taciturn inventor, but at times the pace moves along too slowly that it feels dull and overindulgent. The scenes of Tesla working on his alternating current inventions, which are quite beautifully-photographed, is lacking any dynamic energy. I was mildly intrigued by the alluring French actress Sarah Bernhardt (Rebecca Dayan), but even her scenes seem more melodramatic than provocative. 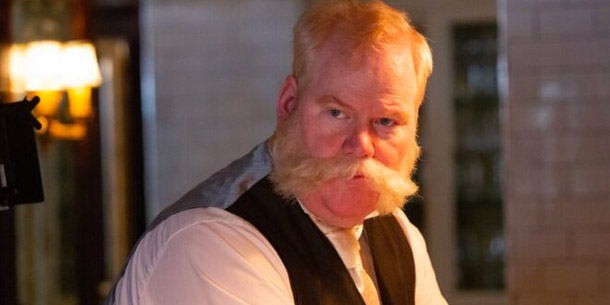 Overall, despite the inventive style, I feel like it’s done at the expense of Tesla’s story itself. The saying in the end said that the world we live in is a dream Tesla dreamt first… that’s a great line that definitely made you feel even more grateful for futurists like Tesla. But other than telling us that this Serbian-American genius was way ahead of his time (which is nothing new), I don’t really get much insights into Tesla the person, not just the inventor. For a film about one of earth’s brightest minds, I think a film about him that fails to illuminate the man behind the inventions is a missed opportunity.

Have you seen TESLA yet? Well, what do you think?