It’s the day before last of TCFF! Whew!! What an amazing 10 days it’s been celebrating Twin Cities Film Fest’s 10th Anniversary!! But as I mentioned in this post, we still have plenty of great films to watch tonight and tomorrow!

One of them is The Chunta, which premieres Saturday at 2:40 PM.

The Chunta is a colorful documentary following the lives of several men (and a couple women) leading up to the celebration of the Fiesta Grande in Chicapa de Corzo, a small town in Mexico. There are plenty of ways to celebrate the Fiesta Grande, but one of the long-standing traditions is for men dress up as women. Most men who participate are parts of “gangs” (although “club” would probably be the most accurate term for an American audience) that work on costumes and do their makeup together. In recent years, one gang has raised the hackles of more traditional gangs because of their LGBTQ inclusivity and their modern take on costumes and makeup.

This is the group that the documentary revolves around. They are led by the tough and somehow also adorable “Auntie They”. Auntie They is part chef, part costume designer, part cheerleader, part mom, part bodyguard, and all love. The audience is swept along on the journey of this little gang as they cut paper and fabric, try on pieces of their costumes, eat, go on interviews, talk about their identities and previous celebrations, and finally get ready for and attend the Fiesta Grande.

There were several points in this documentary when I really wanted a narrator (maybe Auntie They, maybe just a disembodied voice) to offer more context about the festival and the Chunta in general. In some ways, forcing the viewer to play catch up through context clues was great, as it solidified the movie’s message that as the times change, so too do our traditions. But it also leaves the audience struggling to figure out what the Fiesta Grande is, what the Chunta are, and how pervasive the intermingling of LGBTQ identities and the Chunta tradition is.

Ultimately, The Chunta is trying to create conversations about the intersection of cultural traditions and modern ideologies. One of my favorite moments in the film is when a man from the LGBTQ gang tries to explain the cognitive dissonance inherent in the groups who see the Chunta tradition as a paragon of masculinity. Their inability to call the tradition cross-dressing is so confusing that the man can’t help but stumble over his words as he tries to explain their stance.

The example in The Chunta is almost farcical, but a critical viewer will hopefully realize that this cognitive dissonance is present in our own cultures and traditions as well. What are our blind spots? At what moments in our own lives have we metaphorically been that man wearing a full face of makeup and a beautiful dress, complaining about the extra bling in new costumes and the “wrong” kind of people participating in our beloved traditions?

This documentary will leave you with a lot to discuss, but it is also a thing of beauty. The costumes are amazing and the footage of the festival is breathtaking. As the festivities of Fiesta Grade escalate, men and women become indiscernible as everyone whirls down the street and into the church dressed as the Chunta. It is a visual treat.

Check out the movie and then find me at the film festival or on the internet and let me know what you thought about the tradition, the culture, and the men and women represented in the film. Bonus points if the movie helps you come to any conclusions about the LGBTQ community and the traditions that you love.

PS:  I do suggest a little primer before watching the movie. There is a helpful guide on the film’s website that provides some very helpful historical and cultural context.

The Education of a Negro

The Education of a Negro is a must see. It is the first film from Ryan Culver who also wrote the story and served as produced. He was heavily inspired by the shooting of Pillando Castile and a 2006 study done by the FBI on the Klan’s infiltration into our police system. Culver doesn’t have a background in film and has said he felt called to create a film after the 2017 not guilty verdict in the Castile case.

This film focuses on Kenny, the head of a successful tech startup. He is living his best life in the Twin Cities with his beautiful, intelligent lawyer girlfriend J.J. All is well until one night, his brother Kirk is killed by the police under suspicious circumstances. 14 months later the cop responsible for Kirk’s death is acquitted. Kenny tries to move on, but when he learns the truth about the trial he is dragged into a world he knows nothing about and must confront his fear. Kenny and J.J. must go to great lengths in order to get justice for Kirk as his killer so go terrifying extremes to cover up the truth.

I liked this film for a handful of reasons. Firstly, it juxtaposes historical police violence against the events that take place in the film making it clear this although this is an interpretation, these events and experiences are true to life. It makes it clear this is not a new issue as some like to believe but rather, an ongoing issue rooted in racism and slavery. In between scenes of our narrative are short clips highlighting  people who have been lost to police violence in the 60s. It shows individuals being shot by a mocking, masked figure making the viewer take a moment and acknowledge the horrible violence that persists in our country.

I also really liked the way they portray Kenny’s relationships. Too often in Hollywood, African Americans are portrayed as one sided stereotypes, such as a mystic, a thug, a token best friend, the brash woman and domestic. This film gives us two loving and successful individuals who support and elevate one another. Kenny and J.J. are played by emerging talents, Kendrix Lamaz Brown and Alisa Murray. Their chemistry is really good and brings a lovely, well-developed relationship to life. The depth they give each character while they are grieving is truly amazing. And after, when they team up in pursuit of the truth, it’s really powerful.

I also really like the relationship Kenny has with his brother. They have real conversations and are supportive of one another. The pictures and stories Kenny shares with J.J. makes it feel so real and believable. It shouldn’t be, but this often not seen in Hollywood.  Too often brothers and families are pitted against one another and it was refreshing to see real people.

Up there is a charming indie drama co-directed by comedians Daniel Weingarten and Michael Blaustein. The lead actress Zoe Kanters also co-wrote the script and is inspired by real life events. This film focuses on a  journalist struggling to find fulfillment as he searches for “the story” that will launch his career.  He is given an assignment in a small mining town.

Initially, I found the film difficult to watch . It’s a story we’ve seen so many times. A city slicker goes to a small town where they are unwelcome until they befriend an eccentric local. This was not helped by Weingarten’s acting which seemed a bit forced, keeling between overacting and flat delivery. Likewise, his character Jack  had a very unconvincing story arch which left the ending to be unbelievable. Jack never seems sincere enough to elicit the forgiveness we as the audience are supposed to want for him.

On the other hand, Zoe Kanters does truly wonderful job portraying Emma, a happy go lucky local with a haunted past. Emma’s exuberance is mirrored by Blaustein’s performance as Emma’s excessively protective and overbearing older brother Champ. 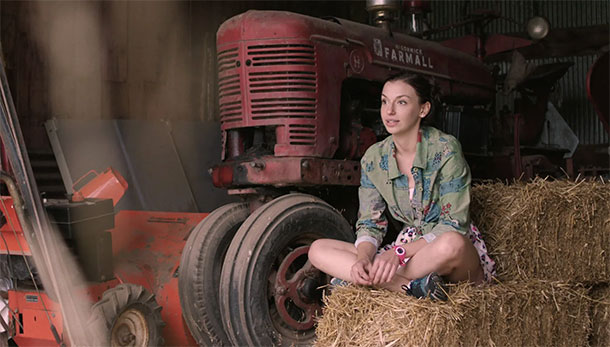 It is these two performances that carry the film. The dynamic they create of two siblings living in the aftermath of family trauma is strong enough to carry the film, past the tropes, slow pacing and minor tech issues.

In the end I thought this film was a really beautiful illumination of rural America and a deeply moving look at a person coping with trauma, loss and mental illness. If you like touching indie dramedies, this is the film for you!