It’s one of the most exciting times of the year! MSPIFF always have a wonderful lineup of documentaries and this is one I had the privilege of seeing early thanks to one of the film’s producers, Kelly Lamplear-Dash, who also helped me land this interview. When I first heard about this film, I was immediately intrigued as I love films about music AND this one happens to have a close personal connection to my adopted state, Minnesota!

What makes this extra special is that one of the film’s directors, Al Milgrom, is a Minnesota film legend. The founder and artistic director of U Film Society in 1962, and co-founder of this very own Minneapolis St. Paul International Film Festival in 1981, he’s had a second career as a filmmaker going back to grad student days at University of Minnesota.

Co-director and editor Daniel Geiger is a veteran filmmaker based in Minneapolis. He’s has worked in the film business for over 37 years on feature films such as: Fargo, North Country, Purple Rain, Wildrose, Far North, Herman-U.S.A., Snow and The Jingle Dress.

It was exactly a week ago that I spoke on the phone with Mr. Milgrom. I had met him last year at a film event, and he was fascinated that I was from Indonesia. He likely knows more about Indonesian cinema than I do, and have even met famous Indonesian filmmakers/celebrities like Garin Nugroho and Christine Hakim. It’s clear that Mr. Milgrom loves learning about other cultures, which is how this film was born.

Before I started asking my questions, I told Mr. Milgrom that I had seen his film and that I enjoyed it. He asked if I was bored by all that music and I assured him I wasn’t. I love learning other cultures and the Czech heritage is so different from my own, which makes it all the more fascinating. I like the fact that it centers on a certain family, as the Shimotas became sort of the ‘face of the Czech community’ so to speak. Some of his family members and friends also chimed in throughout the film to give insights into what it means to be Czech-Americans.

As I was watching the movie and watching Eddie and his son played the accordion, I actually felt a bit nostalgic of my late mother who liked polka music and could play the accordion really well. My mom was always the life of the party back in Jakarta, Indonesia, every time she came out with her accordion, as it’s still quite a rare instrument there. Having lived in Minnesota for over 20 years, I’m always discovering new things about the State, so I’m glad I got to learn a bit about the Czech community and various cultural events such as the Veseli Ho-Down, Montgomery’s Kolacky Days, New Prague’s Dozinky Festival, etc. that’s been passed down through generations.

Singin’ in the Grain is a film that should appeal to every immigrant, or anyone whose parents and grandparents migrated from another country (which are all of us, really). 45-years in the making, the film followed the life of Eddie Shimota in a series of footage spanning 40+ years and three generations. The boy in the poster is Eddie Shimota Jr. as a young teen, which is seen throughout the film from his youth all the way to the time he has his own wife and kids. It’s a film that celebrates a rich cultural heritage and the tight-knit Czech community in Southern Minnesota through folksongs and dances. Music is such a universal language, and something that anyone from any culture can relate to.

When I asked Mr. Milgrom why he chose to explore the story of the Czech community, as opposed to other immigrant communities such as German or Irish, his answer was simple…

The German community is more well-known to people here. The Swedes and Norwegian culture has become assimilated, as is the Germans, so the unique quality has disappeared.

Mr. Milgrom also mentioned the fact that the Irish culture is pretty much only celebrated during St. Patrick’s Day, and the Norwegians and Swedes tend to belong to the upper bourgeoisie in Minnesota (middle or upper middle class) while the people in this documentary are mostly agricultural farmers in a section in Minnesota where, until the highways were developed, weren’t that well-known. 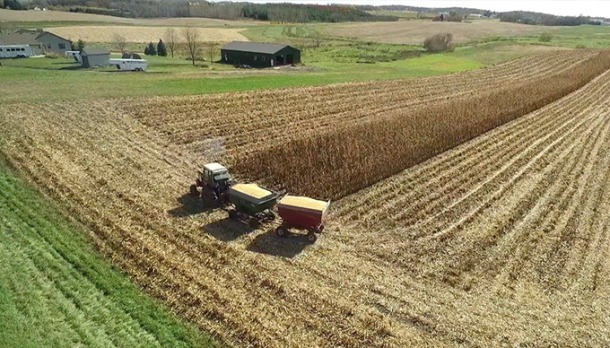 Mr Milgrom himself grew up in a Bohemian community in Pine City, Minnesota, so he already knew a certain amount about the folkways and their culture, even their language when he’s sometimes invited to their house when he was 10 years old. His early love for cinema was through Czech New Wave filmmakers like Milos Vorman, Ján Kadár (who won an Oscar for Shop On Main Street), etc. In fact, some of those filmmakers came to New Prague and were credited as consultants in this film.

Apparently Mr. Milgrom wasn’t initially planning on making a film about Eddie Shimota. Someone mentioned to him about the Hoedown Festival and Eddie’s band was the star of that festival that takes place every August in Veseli. At the time, Mr. Milgrom didn’t even know it was going to be a film, but he found Eddie to be a good subject for a series of interviews, plus he and his band were accessible to him.

“The point is, I really liked the characters. I like Eddie and the Czech people there. They’re very different from the Academic community at the University.

The film shows public domain footage of immigrants coming to Ellis Island that ties in very well with the Czech heritage story. It also talks about various aspects of the Czech heritage in the Bohemian community that’s still being practiced today. There’s even footage of a Czech Honorary Consul (Ambassador) of the Midwest visiting a school in Montgomery, one of the largest Czech communities in Minnesota. But music is integral to the film, and that’s the ‘ties that bind’ if you will, as people of various socio-economic classes (some are farmers, surgeons, etc.) but they’d come together and play music together.

The Shimotas reflect the culture of the ‘old Czech’ that arrived in the late 1800s and settled in New Prague as they form farming communities. Mr. Milgrom said that the old Czech has been somewhat diluted by the new arrival of new generation of Czech immigrants after Velvet Revolution in 1989, with their own folk-Slavic beat and vibe that’s very different from Eddie Shimota’s world.

In my interview, Mr. Milgrom discussed a bit about the clichéd term ‘America is a melting pot’ that’s rooted in the 60s and 70s.

Singin’ In The Grain is a wonderful celebration of such a vibrant and dynamic Czech heritage. I’m happy to have seen a glimpse of their culture and music through this film, and perhaps even participate in St. Paul’s Sokol Hall later this year. The music alone makes it a fun to watch and it’s easy to be swept up by their joyful smiles and warm community spirit. It may have taken over 40 years to make this film but I’m glad Al Milgrom and Dan Geiger got it done. It’s definitely a film worth seeing by everyone, but especially Minnesotans!