Hi everyone! Happy First Day of Spring! Stay tuned for our reviews of Jordan Peele’s Us movie and Shazam! coming later this week.

For now, I thought I’d post some trailers for a couple of upcoming movies (I’m seeing the press screenings next week) … and one that just dropped today! 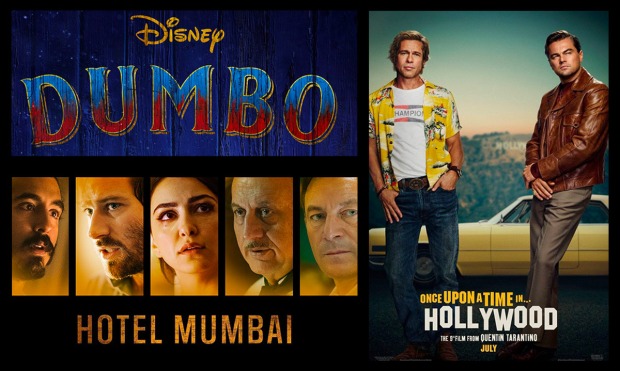 I actually don’t remember much about the Disney cartoon version of Dumbo, I was more affected by Bambi as a kid. But when the first trailer dropped last year I was so moved by it that I teared up! In fact, I couldn’t stop my tears from falling every time I heard the ‘Baby Mine’ rendition by Norwegian singer Aurora Aksnes.

I don’t usually get super excited over Tim Burton movies, but this one looks really good! It’ll certainly be a darker take than the animated version, which is usually the case with the live-action remake. I do love the cast, Michael Keaton, Colin Farrell, Danny Devito and Eva Green who’s perfect as a circus aerialist. The young actress Nico Parker looks so much like Zoe Saldana I thought she’s the one playing her younger version in Avengers: Infinity War.

Can’t wait for the screening next Tuesday, I’ll be sure to pack tissues!

Dev Patel is on a roll. He’s got two films I’m looking forward to, this one and Wedding Guest. I can’t recall much about the events in 2008 this film is based on, where the famed Taj Hotel was under siege by terrorists in Mumbai. This film is a dramatization of the real life events, which is also the subject of the 2009 Emmy-nominated documentary feature Surviving Mumbai (now renamed Mumbai Massacre).

The trailer looks quite gripping and it’s got a pretty good score so far on Rotten Tomatoes. Armie Hammer and Jason Isaacs and one of my fave Indian character actors Anupam Kher. Per IMDb, a significant amount of actual dialogue in the film was repeated verbatim being taken from original transcripts of actual intercepted mobile phone calls during the 2008 siege.

ONCE UPON A TIME IN HOLLYWOOD

Well, well, well,  the Summer of ’69 just dropped on the first day of Spring! [somehow now I’ve got that Bryan Adams song stuck in my head!]

Surely you’ve seen the rather ho-hum official poster that dropped a couple of days ago. Well the memes have been hilarious, but as a huge fan of Eileen Steinbach’s amazing poster designs, I thought I’d include her version instead…

Really excited for Tarantino’s new film @OnceInHollywood, so I created a little tribute poster for it. Hope you like it! pic.twitter.com/a5f7yknjSq

In any case, two of Hollywood’s biggest stars Brad Pitt & Leonardo DiCaprio collide in Tarantino’s ninth feature film, which QT himself has dubbed “the most exciting star dynamic duo since Robert Redford and Paul Newman.”

Well I dunno about you but the one thing that had me do a double take in the teaser is the Bruce Lee scene! Wow, I thought they did some serious special effects to get the real martial arts legend to fight Brad Pitt here…

I had to check out WHO that actor is who played Bruce Lee, he’s uncanny! Well, his name is Mike Moh and guess what, he grew up in St Paul Minnesota and according to IMDb he now runs a martial arts school in Madison, Wisconsin?? 🤯

In any case, well the teaser looked intriguing. I love historical fiction, especially involving the movie industry. It reminds me a bit of the Coens’ Hail, Caesar! though given the Charles Manson connection, it’ll certainly have some dark stuff despite the lighthearted tone of the trailer. It is a Tarantino movie after all. Margot Robbie as Sharon Tate is spot-on casting right there. Oh and apparently Tom Cruise was supposed to play the Brad Pitt’s role of stuntman Cliff Booth but had scheduling conflict filming Top Gun: Maverick. Hmmm, that would’ve been interesting to see Cruise playing Leo’s stuntman!

What do you think of these trailers? Which ones are you most looking forward to?

5 thoughts on “Trailers Spotlight: Dumbo | Hotel Mumbai | Once Upon A Time in Hollywood”