Today is actually the only night where I don’t have somewhere to be this week which is a treat for me. So my hubby and I are going to get some takeout from one of our fave restaurants (most likely Thai) while my hubby treat us w/ some chocolate-dipped strawberries for dessert. #yum

I often post something romance-related on V-day, such as favorite unconventionally-romantic films, cinematic romances or favorite romantic couples. But for this year I thought, since my short film is an indie romance, why not share some of my film influences (whether it’s authors, filmmakers, talents or films) over the years. My short film is a subset of the feature screenplay of the same name. It centers on former lovers Lily & Jacques who reunite for a play by their drama teacher after seven years apart.

If you haven’t seen it yet, below is the teaser to my short film…

This is no surprise at all to those who’ve read my blog regularly or follow my filmmaking journey. I mentioned in my the film’s crowdfunding campaign that the story is partly inspired by my favorite Austen novel, Persuasion.

There’s something so timeless about long lost love and second chances… and how the heart doesn’t always fully recover no matter how long time has passed.

A man does not recover from such a devotion of the heart to such a woman… He ought not. He does not.
– Captain Wentworth

Seven years has passed when Anne Elliot were reunited with Captain Wentworth, but he hasn’t forgiven the fact that she had broken their engagement. The agony of repressed feelings and fear of losing the ones they truly love is something so relatable even in modern society… and the fact that the story is told from Anne’s perspective, a woman, makes it all the more significantly poignant.

I love that in Persuasion, Anne pointed out to Wentworth’s friend Captain Harville that many literary works in that day were all written by men. ‘Men have had every advantage of us in telling their own story’ Anne says. That’s all the more reason I wanted to tell Hearts Want from the woman’s perspective, who also has to own up to the decision she made seven years prior when she left the man she loved.

The beauty of Austen’s work is that they’re filled with wonderful, fully-formed female characters! Yes there are iconic men like Mr. Darcy and Captain Wentworth, but for me, it’s the inner strength of Anne Elliot and Elinor Dashwood that always inspire me. Their patience and endurance seems like a lost art in today’s world, but don’t let their demure demeanor fool you, nor mistake their perseverance for weakness. As I’ve mentioned in this post, Elinor loves ardently but she’s also fiercely realistic and principled, and she perseveres despite her emotional suffering. In essence, she is a survivor.

Though I don’t go to the theatre as much as I would have liked, I’ve always been fascinated by the world of theatre. I have seen Phantom of the Opera three times on stage, including the not-so-successful sequel Love Never Dies in Adelphi Theatre, London.

The critics panned this cinematic adaptation but I LOVE the lush visuals and sensuality of this POTO adaptation. There’s such a titillating mystery of love in a historic, vintage theatre. The setting of where a film is set can add so much to the atmosphere and mood of the film, especially in a romance. That’s part of the reason I set the love story of Hearts Want in a theatre and I insisted that we filmed it in 100+ year-old The Southern Theatre in Minneapolis. It may not look like it from the outside but the inside could’ve been an antique theatre somewhere in Europe.

As a fan of period dramas, I’ve seen a boat load of them, but it’s rare to see a strong woman of color at the center of the story. Belle is a historical romance set in 18th century England, so naturally it’s scandalous for a prominent figure in London society to take in a mixed-race girl as an adopted daughter.

I love that Belle is an intelligent, elegant and headstrong woman who isn’t afraid to speak her own mind. Gugu Mbatha-Raw is exquisite in the title role and her beauty definitely inspires my female protagonist Lily, who’s a mixed-race woman born in London.

True love is never easy. It doesn’t get more tumultuous than Jane & Rochester’s gothic romance. As the old adage says… “If you love someone set them free. If they come back they’re yours; if they don’t, they never were.” Easier said (or watched) than done, surely.

Every time I watched a Jane Eyre adaptations (the 1983 with Zelah Clarke & Timothy Dalton and 2006 version with Ruth Wilson & Toby Stephens are my personal faves), I’m always in awe of Jane’s resolve to stick to her principles.

Inspiration can truly come from many forms. I don’t usually listen to pop music, my car radio is always tuned to Classical MPR, so I often come across certain songs from YouTube. I remember seeing this music video of 1983 Jane Eyre set to a song called The Reason. I thought the lyrics about being sorry for the hurt one’s caused and wanting to start anew resonates with me so much… we all have made mistakes in the past, don’t we all wish we get a second chance to make things right?

Every writer needs a muse 😉 This dashing Frenchman isn’t exactly the first actor who’ve inspired me in my literary journey. A certain Scotsman actually inspired me to write a novel that I never got around to finishing.

But Stanley is the first actor who’ve inspired my first screenplay! It just so happens I had seen him in a British rom-com (Not Another Happy Ending) as I just started writing my script and I was instantly smitten.

Yes, the tall, wavy-haired, blue-eyed actor is extremely easy on the eyes, but the more I learned about him, the more I was intrigued by his versatility as an actor (juggling theatre, tv and movies in his native France and beyond) as well as his zest for life. I’d think that people who has such a passion for life would just be as passionate about love when he falls for someone. The Parisian also seems like a free spirit with a voracious love for the ocean (hence the sailing scene in Hearts Want), motorbikes, and traveling. Heck even his Instagram photos are inspiring!

If I had a time machine, I’d transport myself to Théâtre de l’Atelier in Paris to see Stanley on stage in Eugene O’Neill’s Anna Christie. Interestingly enough, the play has a Minnesota roots as the protagonist is from St. Paul! There are similarities between the play’s male character Mat Burke to Hearts Want‘s Jacques, in fact, my feature script opens with a scene from this very play!

So yeah, thank you for the inspiration Stanley… he’s definitely my dream leading man if I ever get to make the full version of Hearts Want 😉

The ‘love is letting go’ theme is perhaps more beautiful to witness in the movies than to experience in real life. Few romances are as heart-wrenching as the love story of Rick and Ilsa set during WWII. The WWII-themed play at the beginning of Hearts Want‘s short was partly inspired by this film, though the leather bomber jacket Jacques’ sporting is directly inspired by Gregory Peck’s 12 O’Clock High. 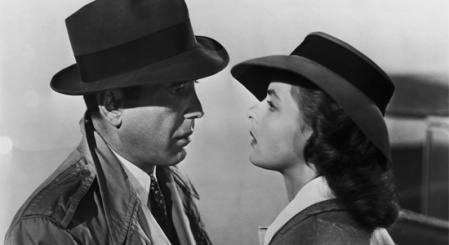 Speaking of Mr. Peck, some of you might know I was at one time obsessed with him. In fact I still owned a bunch of his dvds. The one that gets played a ton is Roman Holiday, and that beautiful but bittersweet finale gets me every single time.

Joe walking alone in the empty palace corridor as everyone has left, his steps echoing as he reluctantly leaves the building. As he passes the two guards, he still takes a glimpse towards the stage once more. Empty. The music swells up, forcing us to realize they’re never going to see each other again. Joe keeps on walking towards the camera and disappears, carrying the memory of that day in Rome that he too will cherish for as long as he lives. Best. Finale. Ev-er.

I remember seeing this film on a nearly empty theatre at a press screening and I almost couldn’t move when the end credits rolled. It’s the story of a lonely writer dealing with an impending divorce who finds love when he least expects it. There’s such a captivating male vulnerability in Joaquin Phoenix’s soulful performance as he slowly but intensely falls for his AI Samantha (voiced brilliantly by Scarlett Johansson). 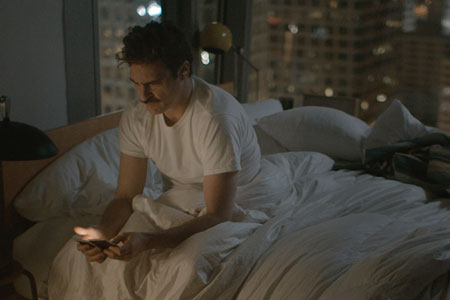 The euphoric joy and intense sadness he feels for Samantha is so palpable, it’s perhaps one of the most emotional love story I’ve ever seen. Just because the love story is not between two human beings doesn’t make it less emotional. Samantha said it best…

“Falling in love is a crazy thing to do. It’s kind of like a socially-acceptable form of insanity.”

I recall a review that says something about the spirit of the exquisite romantic pain depicted in this film. It’s certainly one of the most painfully-exquisite portrayal of unrequited love. 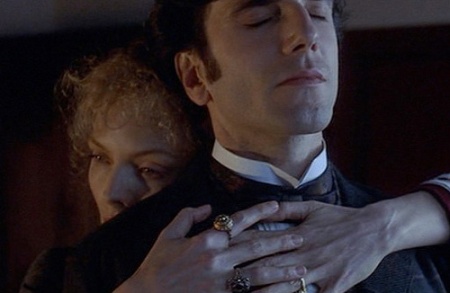 Newland Archer: You give me a first glimpse of a real life, and you ask me to carry on with a false one. No one can endure that.

This may not be a violent film from Scorsese in physical term, but it’s certainly a vicious one in terms of matters of the heart. Visually-ravishing as well as a visceral depiction of the agony of love. I guess I’m a sucker for tragic tale of impossible love, which has been done countless times, but few are as beautifully-crafted as this one.

Last but not least… I have to include at least one rom-com and nobody does the genre as well as Richard Curtis! The Anglophile in me naturally gravitates towards the London scenery, which is practically a character in itself in the film! It really makes me want to set my story in England, though I ended up choosing a small seaside town south of London that has a prominent theatre Hearts Want, it’s called Chichester. There is one a similarity between Julia Roberts’ Anna Scott in that my protagonist Lily is a successful actress, but of course the circumstances of the story is completely different.

In any case, I thought the opening scene is the perfect introduction to the film’s protagonist and the world he lives in.

Ok so I don’t necessarily count Shakespeare as one of my major influences, despite having seen quite a number of his plays. But I’ve always admired playwrights, hence I have a playwright (Martin) as a prominent character in my feature script and Hearts Want is the name of his play that reunited Lily & Jacques.

The Bard certainly knows a thing or two about writing romances. As he says in A Midsummer Night’s Dream…

The course of true love never did run smooth.

Thoughts on these talents/films? What are some of your own film influences?