It’s been ages since I’ve got time to write a review, but I knew I had to write one for this after I saw it last weekend.

I’ve mentioned PILGRIMAGE all the way back in January 2016. It’s been a long time coming but I’m glad I got to see it on the big screen (though it’s a shame it’s only playing in a single theatre in Twin Cities suburbs with odd screen times!) 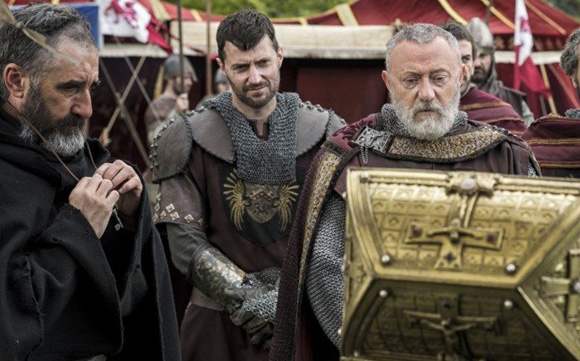 In 13th century Ireland, a group of monks must escort a sacred relic across an Irish landscape fraught with peril.

The premise is simple, but it’s packs a punch in terms of its thought-provoking story and the unrelenting violence these monks face along the journey. It opens with a horrific stoning of Saint Matthias, the apostle chosen to replace Judas Iscariot following his betrayal. The barren landscape of Ireland, an island on the edge of the world is striking… there’s otherworldly feel to this raw, beautifully-shot film that immediately grabs your attention. 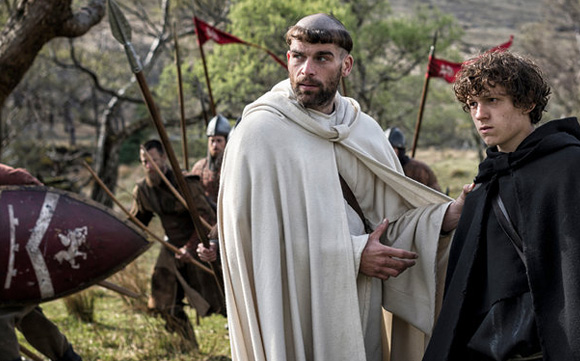 I saw this film mainly for the French actor Stanley Weber who plays a Cistercian priest, Brother Geraldus, and boy did he make quite an entrance. He came to the monastery and soon the monks are on a pilgrimage to escort a holy relic all the way to Rome. Naturally there’s tension mounting between the monks themselves, each have their own views of the significance of this relic.

Pilgrimage explores the themes of what faith means to people. It’s not a deep study of the subject, but it certainly makes a compelling case about religious fanaticism and that radical ‘faith’ can ultimately lead to radical consequences. The film is more of an ensemble cast comprised of four main characters, Tom Holland as Brother Diarmuid (the novice), Stanley Weber as the Cisterian, Jon Bernthal (the mute with a violent past) and Richard Armitage (Norman knight Raymond). I’d say Bernthal is perhaps the most fascinating of the four, simply because of his charismatic, wordless performance that makes you wonder throughout just exactly who this man is. He’s loyal to a fault to the monks but you know he’s a ruthless and dangerous man. It’s a physical role but that demands a quiet menace which Bernthal pulls off with aplomb. 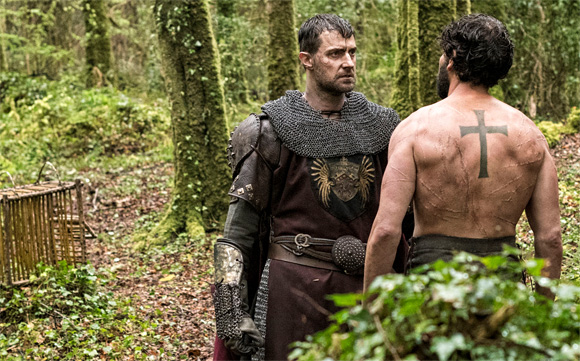 Acting-wise, Holland, Bernthal and Weber are the most memorable to me. Armitage is good but I feel like he’s basically reprising his role as Guy of Gisborne in BBC Robin Hood, though his French is rather impressive. Interesting that Holland and Bernthal are now part of the lucrative Marvel Cinematic Universe (as Spiderman and Punisher respectively), but they’re both such talented actors that I hope they’ll continue to seek out smaller work such as this one that stretch their acting ability. Weber might not be a household name yet despite being cast in season 2 of Outlander, but he’s certainly got the charisma and acting chops of a leading man.

The film is quite violent, especially the attack in the woods that left practically everyone slashed, chopped and bludgeoned to death. There’s also a torture scene involving a Medieval torture device that sure made me wince. The action didn’t let up until the very end, set in a desolate beach that really takes your breath away. It’s so refreshing to see something unique that doesn’t fit the Hollywood mold. This is one of those rare films that’s not based on any literary works but is an original script by Jamie Hannigan. I love that director Brendan Muldowney also uses many languages in the film, Gaelic, French, Latin, English. I also appreciate that the film is shot on location, you can practically feel the misty air and cold breeze as you’re watching the film, which adds to the intense, gritty and bloody realism of the film. 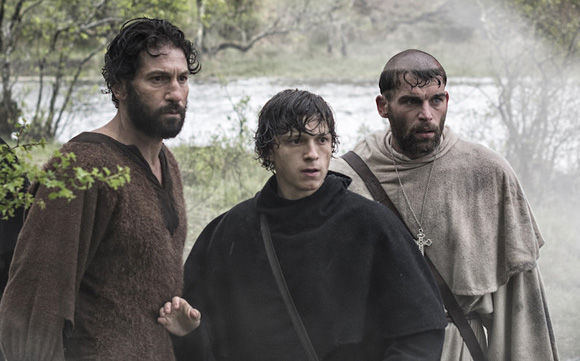 If this is playing near you, I urge you to see it on the big screen. We need to support original films like this one as it’s becoming even more of a rarity. Made with a shoestring budget yet generates a big impact, I certainly don’t mind seeing this again on Bluray. I so agree with Keith’s review that big budgets aren’t essential to good moviemaking… and this film is definitely a testament of that.

Have you seen ‘PILGRIMAGE’? Well, what did you think?