Hoping to start their shared universe of monster films, Universal decided to reboot one of their earlier successful franchises with The Mummy. With Disney and Warner Bros. ranking in big dollars at the box office with their superhero flicks, Universal is hoping this so called Dark Universe will bring in big money for them as well. Unfortunately, they should’ve spent more time fleshing out better script and ideas because this latest incarnation of The Mummy is a mess.

In Iraq, military men Nick Morton (Tom Cruise) and Chris Vail (Jake Johnson) are working outside their duty, hoping to find antiquities or treasures and sell them to the black market for large sum of money. On one of their trips to a small village, they accidentally unearth a burial site beneath the sand. The men discover the remains of Ahmanet (Sofia Boutella), an Egyptian princes from thousands of years ago who wants power and live forever, so she made a deal with the god of death and murdered her family. She was eventually captured and was mummified. Now in present day, Morton who was driven by his own greed, decided to open the tomb and released an evil force that could destroy the entire world. In terms of plot, there’s not much going on, after Ahmanet is set free, she chases our hero around London and then gets captured by Dr. Jekyll (Russell Crowe) and his team. Then Dr. Jekyll proceeded to tell Morton and the audience of what’s really going on. Even though it’s advertised as a non-stop action/adventure, there weren’t a lot action in the film. 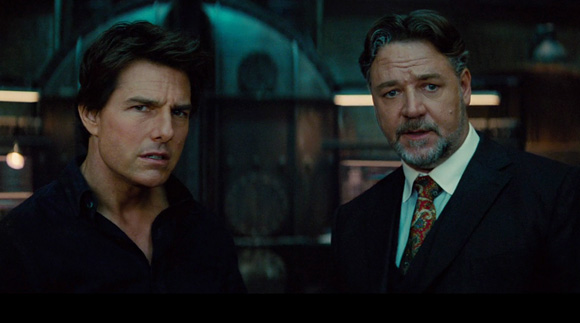 Six screenwriters were credited and I don’t think none of them knew what kind of film this is supposed to be. It tried to be horror then comedy then action then back to horror. The comedy was flat, the scares were non-existent and the action was scarce. Maybe had the film been directed by a more experienced director, it could’ve been a decent action/horror. But Alex Kurtzman is not that director, with the exception of a very cool airplane clash sequence; he couldn’t put together exciting action sequences or coherent story. I hate to use the terms “plot holes” but this film was full of them. There’s a prologue at the very beginning of the film that didn’t need to be shown and motivations of the characters just didn’t make a lick of sense to me.

Performance wise, Cruise was basically playing an older version of Maverick from Top Gun and he seemed to be having a good time in the first 30-40 minutes of the film. Then you can tell he lost interest and pretty much in cruise control mode with his performance for the rest of the film. Jake Johnson is pretty much wasted here as the thankless side kick/comic relief role. Annabelle Wallis who played Cruise’s love interest, is pretty lackluster in her performance. She’s the typical damsel in distress character. Sofia Boutella is The Mummy and she’s a one note villain, she wants to destroy the world and live forever. The only interesting character to me is Crowe’s Dr. Jekyll. Maybe the film would’ve much more entertaining had they made him the lead as Crowe seemed to have a good time playing the character.

It appears Universal’s Dark Universe is over before it began, they have no one to blame but themselves. I was never a big fan of 1999’s The Mummy but it has its fun moments and didn’t try to be anything than an action film. This latest version tried to be too many things and it failed miserably.

So have you seen The Mummy reboot? Well, what did you think?