If film is a mirror on society then the sheer volume of recent movies about the ugliness of the post-GFC world is a reflection of the scale of devastation it has caused. Most are essays in poverty that explore the loss of humanity for ordinary people. The film I, Daniel Blake (2016) is another in this genre. It is an intense portrait of an ordinary man who struggles to retain dignity in an Orwellian world. Far from entertaining, it is gritty, raw, and unrelenting.

Daniel Blake (Dave Johns) is a rough-speaking but likable 59-year-old tradesman in Newcastle, England. He is recovering from a serious heart attack and lives alone. Unable to work, he does what thousands like him do in such circumstances: he applies for support allowance so he can pay his bills until health returns. What happens next is not the point, rather it is how it happens that will make you cringe. Form-filling becomes an obstacle course for preventing people like Daniel from getting help and the staff who process him absolve themselves of responsibility through constant referral to the “decision-maker” who is never there. Denied support allowance, he must apply for a job-seeker benefit that requires 35 hours a week of documented job hunting. His protestations are officially sanctioned and he loses all support. 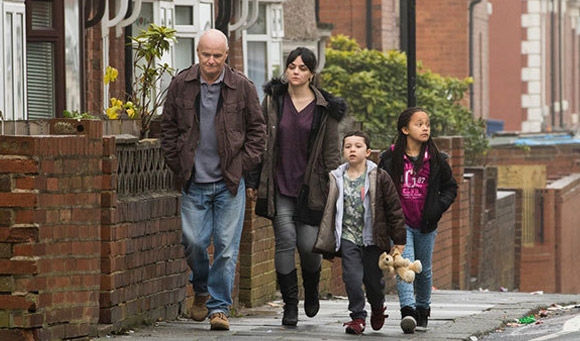 In the midst of his own inhuman treatment by a soul-less bureaucracy Daniel tries to help a single mother with two young children who is also crushed by the system. Katie (Hayley Squires) has moved from a homeless hostel and is living on food handouts because her benefits have been stopped. She finds ‘affordable accommodation’ that Daniel offers to repair and he becomes a father figure. Still unable to buy shoes for her children, Katie finds the kind of work that shocks Daniel but is the last resort for many abandoned by a social welfare system with gaping holes in its safety net. Desperate to help her, Daniel vents his frustration through graffiti on the welfare office wall and briefly becomes an urban hero.

This is a disturbing film that many audiences will find confronting, particularly those who think they live in a caring society that supports people in need. The pace is slow and the dialogue often terse, but that’s how life is at the bottom. The subdued cinematography and colour palette accentuates the drabness of life for the dispossessed. Perfectly cast, the two main actors fill their roles with an authentic voice for countless ordinary people who fall on hard times. There is no joy in this film and whatever humour you find is there to make the story bearable. But in a world that moves inexorably towards a hard-right social conscience, it is a film that cries out to be seen and heard.

Have you seen ‘I, Daniel Blake’? Well, what did you think?