So this is a film that has quite a pedigree. Starting w/ the director Robert Zemeckis, who have made some of the best films like Back To The Future, Romancing The Stone, Forrest Gump, Contact, etc. plus the two A-listers, Brad Pitt and Marion Cotillard. I have to admit my main draw was Zemeckis and Cotillard, as I’ve never been a Pitt fan. Well, my instinct is right the first time around as Cotillard is certainly the more interesting to watch out of the two.

The film is set in 1942, with Pitt as an intelligence officer Max in North Africa where he encounters a female French Resistance fighter, Marianne, in Morocco. The opening shot is striking, with an aerial shot of the desert and a wide shot of Pitt walking under the hot Sahara sun. Then he gets picked up in a car à la James Bond (the scene is reminiscent to when Bond and his girl get picked up by a Rolls-Royce in the middle of the Moroccan desert in Spectre). It plays out like some kind of retro GQ commercial with Pitt looking clean-cut and debonair, as he’s dropped off at a party to meet his pretend wife. Again it’s as if he’s playing Bond to his Bond girl, complete with the him speaking in French in front of Marianne’s friends. 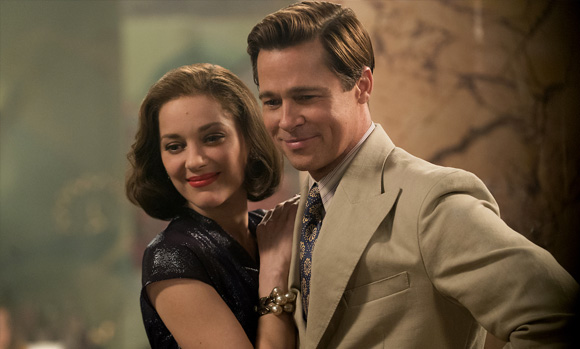 I love spy romances, it’s a sub-genre I wish Hollywood would make more of. Well, Allied certainly has all the ingredients for a great WWII romance drama. It’s definitely more drama than thrillers as you can count with one hand the amount of action in this film, which suits me just fine. What I do expect is a compelling story, great suspense and a sweeping romance worth rooting for. Unfortunately, the film falls short on all counts. The main thing for me is that it feels so insincere. Yes I know the actors are pretending to play pretends in the film, and it was rather amusing to watch at first. I especially enjoyed the scenes of them at the roof with Cotillard playing up her flirtatious side. But after a while it becomes kind of repetitive.

…
There’s not much espionage stuff going on in this film, but the first part was definitely much more engaging than the second. After an action-heavy scene at a top-ranking Nazi officer’s swanky party, the film then transitions from North Africa to the UK, where pretty much all the intrigue and flair fizzles almost instantly. Max and Marianne are now happily married with couple. When suspicion arises that Marianne is perhaps not who she says she is, the dramatic tension just isn’t there. I feel that Pitt is sort of sleepwalking his way through the film. Perhaps he aims to look poised and unruffled, but he comes across looking bored. Cotillard fares much better though she overacted a bit in parts, but her immense screen charisma is always a treat to watch. Then there’s the lack of chemistry between the two. Even the sex scenes lack any real heat, heck I was paying attention more to how they do that dust storm effects whilst they’re in the car! Overall I just don’t feel invested in their love affair. It’s really too bad as the story certainly has potential for a real heart-wrenching wartime romance. 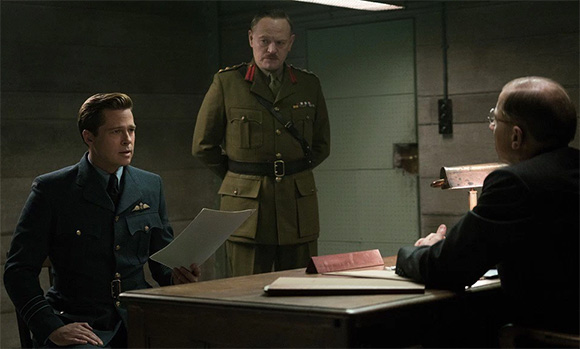 The supporting cast don’t really get much to do. Even the great Jared Harris, who was simply astonishing in Kelly Reichardt’s Certain Women, was perhaps the most memorable one here as Pitt’s boss. Matthew Goode is barely recognizable and his cameo appearance seems like a waste of his talent. Lizzy Caplan is grossly-underutilized as her character doesn’t seem to serve much purpose at all.

Now, the Mr & Mrs. Smith comparison is inevitable given both leads are spies (not to mention the recent commotion of Brangelina), but the Morocco setting also instantly conjures up memories of the much, much more compelling WWII romance drama Casablanca. Watching this actually made me want to rewatch it and so I did. I convinced my hubby, who hadn’t seen it before, to rent it on Thanksgiving eve. Well, Allied could barely hold a candle to that masterful classic, no matter how visually dazzling it looks. Which brings me to the stunning cinematography by Zemeckis’ regular Don Burgess. The visuals, costumes and set pieces are definitely a plus here, they’re more authentic than the performances of the leads.

Overall, this is quite a disappointing effort from Zemeckis. The film is more style over substance… an elegant, sleek but utterly superficial affair. I’d think this type of film would make me cry buckets, but my eyes were dry the entire time. What’s more, for a film about espionage, the utter lack of edge and suspense is indefensible.

Have you seen ALLIED? I’d love to hear what you think!