I have to admit that I didn’t know this film was in the works until I saw it on the press screening list. I had listened to Kenneth Turan’s review of the French film Marguerite on NPR, which is also a biopic of a wealthy woman who loves music and the opera but is delusional about her singing ability. In this film, the title role Florence Foster Jenkins (Meryl Streep) is a New York heiress who’s always dreamed to play in Carnegie Hall.

In the press screening I attended, there were quite a few members of the MN Opera, and so the audience responded very well to the movie right from the start. It begins with Hugh Grant‘s character, St Clair Bayfield, acting on stage. Then suddenly we see Jenkins descending from the ceiling, suspended on a rope, decked out as a naughty Valkyrie. She goes home with her husband Bayfield, who lulls her to sleep with a poem, but their marriage is more like an act, as they live separate lives. Bayfield lives with his beautiful mistress Kathleen (Rebecca Ferguson) who tolerates this arrangement to some degree. But it’s clear that Bayfield genuinely cares for his wealthy wife and he dotes on her. He’s the one who protects her reputation and sustains her life in a bubble so to speak. 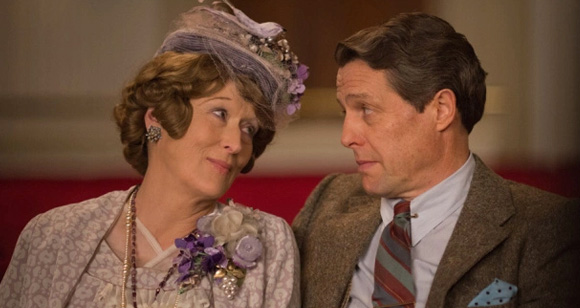 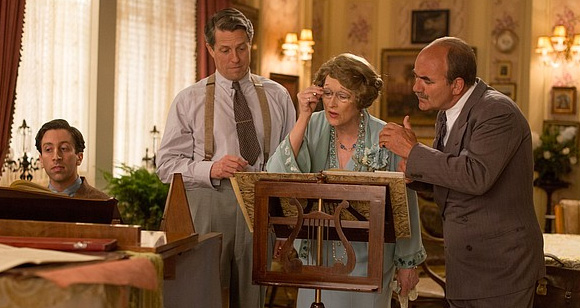 The film’s funniest moments involves Jenkins’ accompanying pianist, Cosmé McMoon (Simon Helberg), whom she hired on the spot. The shy young man couldn’t believe his luck, earning $150 a week is more than he’d ever expect. But soon he finds out what it actually entails to work for miss Jenkins. Helberg’s expressions the first time he heard Jenkins sing (if you could even call it that) is simply priceless!! He did whatever he could not to burst into uproarious laughter and it was a hoot to watch.

The rest of the movie is pretty much an elaborate scheme to shield Jenkins from criticism. The Carnegie Hall is closed to the public, as Bayfield goes out of his way to only invite friends and those he could bribe. No doubt critics aren’t allowed to attend, as he knew an honest review would crush Jenkins. British filmmaker Stephen Frears is no stranger to directing biopics starring seasoned actresses (The Queen, Philomena) and he did a splendid job once again. This film is definitely more comedic than the two I mentioned, and the laughs just keep on coming. The humor doesn’t simply rely on an elderly woman singing off key, but I’m fully invested in the whole ruse of keeping Jenkins inside her bubble. It’s funny but also a poignant and heart-warming drama, boasted by a terrific performance by the three main cast.

Streep is an acting virtuoso, and she did all her own singing here, which must have been a challenge as she’s actually a pretty good singer. Helberg is quite the scene stealer, as he’s in all of the funniest bits in this movie. I’ve never seen him before but he’s definitely a gifted comedian. But it’s Grant who’s quite a revelation here with his heartfelt and understated performance. He made me believe that Bayfield’s love for Jenkins is genuine and that he’s not just a gold digger taking advantage of a wealthy senior citizen. All the quiet moments of him and Streep pack an emotional punch.

It’s hard not to root for Jenkins despite her delusion of grandeur. I found myself being swept away by her and this movie. I love the look of this movie too, with beautiful 40s set pieces and costumes. It’s a lovely crowd pleaser that will make you want to get up and cheer. I saw this the day after Suicide Squad, oh what a perfect palate cleanser this turns out to be! The protagonist may be off key but the film certainly is not.

Have you seen ‘Florence Foster Jenkins’? Let me know what you think!