It’s almost Friday everybody!! Woot woot! It’s only a four-day work week for me but it felt like time was ticking so s-l-o-w-l-y I felt like I had worked a 6-day week already!

What’s happening in your world? Well for me, it’s just two words: SAM. RILEY. I’m falling even deeper under his spell after seeing the rock biopic Control.

I’m going to see Pride and Prejudice and Zombies again this weekend before it’s yanked from theaters and I can’t freakin’ wait!!!! I’ve been collecting all kinds of stuff for my Sam Riley tribute but now I’ve waaaay too many articles I have no idea where to start!

In any case, let’s get to those fine links now shall we?

Margaret has been making fabulous top 10 lists this week, check out this one on 15 Best shots of 2015

Wendell just put together The Acting Black Blogathon to coincide w/ Black History Month of February. Check out the latest links from Day 3

Chris is continuing his list of Best 80s songs, all the way to Part 12! Speaking of great music, Andrew continues his Tuesday Tunes Tastings series by reviewing a set of four new albums w/ an awesomely creative rating system!

Last but not least, my dear friend Paula is hosting 31 Days of Oscars Blogathon again this year. I’m unable to take part but check out the links from a bunch of fine bloggers! 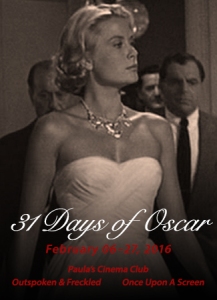 Boy, the Screen Junkies folks absolutely nailed everything I hated about Spectre. Heh, now that I think about it, my 2.5/5 rating seems far too generous for this poorly-written and lazily-acted movie.

…
It’s really embarrassing that in a year where there are at least four good spy-themed movies, the granddaddy of this genre is the worst one of the lot. I LOVE that bit about re-watching Captain America: The Winter Soldier instead. I didn’t realize their plots are pretty much identical, but The Winter Soldier actually has genuine character arc AND a compelling story. I for one am ready for a new Bond so I hope this rumor that he’s quitting 007 is true!

So what are you gonna be watching this weekend, folks?