Happy Thursday everyone! What a week it’s been. I went to the Christopher Nolan lecture at the Walker Art Museum on Tuesday and last night was the Far for the Madding Crowd screening. My post on both of those would have to wait until I’m back from vacation. But I have to share my first reaction about the latest Thomas Hardy’s cinematic adaptation:

In the novel, Troy is described as “handsome, vain, young, and irresponsible,” he is to be Bathsheba’s sexual awakening, but from the second Troy’s introduced on screen (played by Tom Sturridge), he just did NOT fit my idea of such a character. SPOILER ALERT [if you don’t want to know the plot, don’t read below the photo]

He looks more like someone from some boy band like One Direction with his full head of hair and effeminate-looking face and body. The swordsmanship scene is well-directed but Troy himself didn’t leave me breathless… and naturally the sex scene lacks passion. My girlfriend asked me as we walked out the theater if Troy is supposed to be some soldier wanna-be or something as he just doesn’t have that strapping look of a military man. Heh, I haven’t seen the 1967 version but Terence Stamp looked far more convincing as Troy. It’s a pity because I have no problem with other two male actors (Matthias Schoenaerts and Michael Sheen), and I adore Carey Mulligan as the heroine Bathsheba. 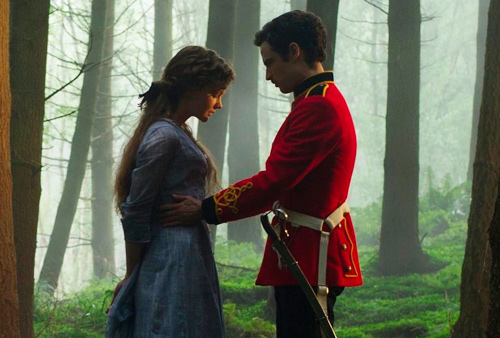 You may accuse me of being biased given how I feel about Stanley Weber these days, but seriously, if only I had been a casting agent for the film, I’d cast him as Troy in a heartbeat. He’s played a charming, sexy bad boy with aplomb as Juan Borgia, someone SO devilishly bad but oh-so-irresistible. I’m sure he can work on perfecting a British accent, but charisma, especially of a sexual nature, is not something an actor can train for.

Now that I got that out of the way… let’s get to those great links, shall we?

Josh did his May Oscar predictions whilst Andrew posted his 4 Ways a Best Picture roundtable. Never too early to talk about awards I guess.

Tom and Mark are hosting the Decades Blogathon. Spots are filling up fast!

Speaking of top 10, Chris got me all nostalgic in this post of top 10 Janet Jackson songs

To celebrate her 5th blogaversarry, Mettel Ray have been posting a bunch of top 5 lists, the latest one being Top 5 Trios

Over at Dan’s Top 10 Films blog, Rodney posted his top 10 Films of cinematographer Andrew Lesnie who just passed away

Margaret, Sidekick Reviews and Melissa did a recap of the latest Game of Thrones episodes

Lots of foreign movie reviews that have been popping up this week, which is interesting as I’ve been watching a ton of French movies and videos 😉

And last but not least, Jay posted some mini reviews including some terrible movies you should avoid!

Time for a Blog Break!

Well my hubby and I be going on a week-long vacation to celebrate our wedding anniversary. We’re going to Tampa for a few days and then Orlando to visit…

I’ve been wanting to check out the Harry Potter theme park for some time. I always enjoy going to these type of stuff, makes me feel young again 😉 But I’m also looking forward for some r&r at some of the best beaches in the area, like Clearwater Beach, visit Greek town Tarpon Springs and maybe head south to Sanibel Island!

So see you in about a week, folks! If you have any travel tips for the Orlando/Tampa area, please do let me know.